Spider Jerusalem said:
I wouldn't mind trying a Goncz/Claridge Hi-Tech. Admittedly, no idea how it would shoot. Looking at it, can't tell if the weight distribution is genius or torture.

Being a fan of the original recall. Always wanted to try one of these.

Spider Jerusalem said:
Only if I can also have Danny Vermin's .88 Magnum.
Click to expand...

It shoots through schools

appraiser said:
Everyone loves the MK series ..... until you try to put it back together after cleaning it.

The love goes away real fast after that
Click to expand...

The MKIV comes apart so easy. There's no f***ing way I would ever own an MKII/III after touching a 4. I had an MKII and I never took mine apart. Ruger cleaned it once when it was f***ed up, after that I used to just take the grips off and douche the whole thing with gun scrubber, let it dry, relube it, wipe down, put grips back on.... there was
no way I was using a hammer and shit to take that apart... eff that noise. One guy I know who is a gunsmith, there are people who literally come in and pay him $20 to clean their MKI/II/III...

Cars&Guns said:
Kriss Vector is mine for sure. So clunky boxy and awkward.
Movies and Call of Duty make it seem so tacticool and I could just not get along with it and had to sell it pretty quickly after buying it.
Click to expand...

Unless Mila Jovovich is slinging them!

andrew1220 said:
How about the Ruger P90 from Desperado?? I must have watched that movie a hundred times growing up as a kid. I bought one about 5 years ago and it was reliable but ugly and heavy so I sold it after about a year. But I'm sure it would have lasted a long time.

I’ll have you know that was one of the first guns I Considered purchasing after I got my LTC. I didn’t know enough about guns yet so I didn’t buy it.
I’ve regretted that ever since. it just felt so right and was built like a tank. I still look for one and haven’t found it here in Ma. (Albeit I’ve only half assed looked)

I love Tarantino, and he loved the S&W 659 in Reservoir Dogs.

To those whi have said the PPK i wholeheartedly agree. It had some silly recoil for its form factor and catridge (.380) and every part was sharp. Ive never been “bit” by any pistol except the PPK. Its one of my favorite looking pistols and iconic to boot, but one of the worst pistols ive ever shot.

drgrant said:
The MKIV comes apart so easy. There's no f***ing way I would ever own an MKII/III after touching a 4. I had an MKII and I never took mine apart. Ruger cleaned it once when it was f***ed up, after that I used to just take the grips off and douche the whole thing with gun scrubber, let it dry, relube it, wipe down, put grips back on.... there was
no way I was using a hammer and shit to take that apart... eff that noise. One guy I know who is a gunsmith, there are people who literally come in and pay him $20 to clean their MKI/II/III...

Yea, in my gun ownership noob days I wanted a MKIII, until I watched a 20 minute youTube video on how to take it apart and put it back together with a special tool that makes it possible to reassemble with two hands. I then said WTF would anyone buy one of these?

Growing up watching war movies with my dad you always seen the GIs trying to get a coveted P08 Luger. Knew then I wanted one. Finally got one last year and I hate to say it but eh.... it was ok but nothing spectacular. Mediocre accuracy and ergonomics and at the end it’s just another handgun shooting 9mm.
T

Glocks are ILLEGAL in MA to own so you should delete your post OP before you get in trouble for violating Healey’s c*** hairs.

TPNES said:
Glocks are ILLEGAL in MA to own so you should delete your post OP before you get in trouble for violating Healey’s c*** hairs.
Click to expand...

Bought my Gen4 in MA, sold it in MA. FTF private sales both times.

Walther P99, as good to use as looks cool in hands of Kate Beckinsale and James Bond:

All of them. When I found out a blast from a 12g wouldn't send you flying threw the air 15 feet or a 9mm to the shoulder wouldn't spin you round like a top, I was just crushed. I just feel like real guns are just mere shells of what they could be if physics just f***ed off.

MisterHappy said:
Well, they DID manage to turn Babou into Space Ocelots!

I think he remembers me! 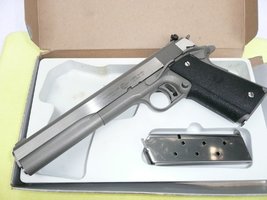 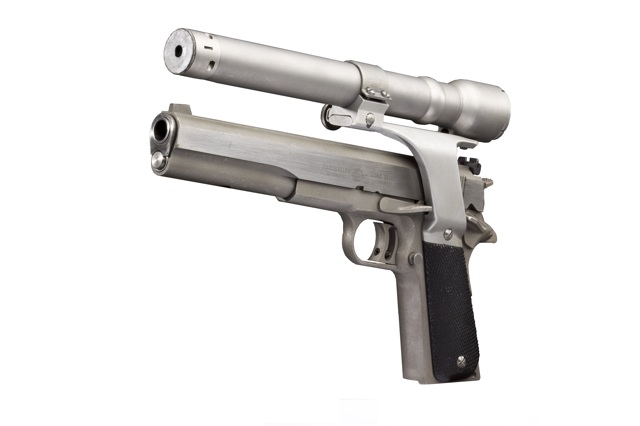 True story: the making of the Terminator's laser-sighted .45 pistol

There are multiple iconic weapons in science fiction history, but few are as …

Picton said:
I was bored.

Anyone know any cool pistol right now that costs about $8k new?
Click to expand...

A G7 was alleged to be some rare unicorn. So a rare unicorn that's still $4,300 today? That evades all metal detectors???? Seems like a bargain.

A G7 was alleged to be some rare unicorn. So a rare unicorn that's still $4,300 today? That evades all metal detectors???? Seems like a bargain.
Click to expand...

Hahaha. Read this thread before lunch. Came home. Son is playing CoD. "Dad. I got that vector thing." "Uhhh, OK." "No. The vector???" "Show me. . . . Oh a KRISS Vector. Yeah. If you don't say Kriss, no one knows what you are talking about." (Of course about 80% of the guns on his games are mis-named and such so I never know if he's got a real Vector or just the name of yet another AR variant.)

A G7 was alleged to be some rare unicorn. So a rare unicorn that's still $4,300 today? That evades all metal detectors???? Seems like a bargain.
Click to expand...

I used to have a G7, but I put it down for a minute and could never find it again, damned invisible, undetectable machine pistols!

ReluctantDecoy said:
You know every guy on this forum would probably pose in the mirror, eyebrow raised, PPK in hand saying: "Bond, James Bond". You're just lying to yourself if you disagree. lol.
Click to expand...

Once I was yound and stupid enough to buy a PPK because James Bond had one. Here it is 35 years later and I'm still stupid enough to have it and don't plan on selling it but I never stood in front of a mirror with it.

I've always been jonesing for a Bren Ten. 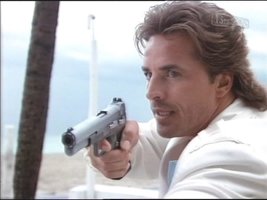 Franchi SPAS-12 in Terminator and Jurassic Park, got to fire one and it sucked.

1903Collector said:
The Beretta 92 sucks too because I have been tryin to make smiley faces on my targets with it since the late 80s and still can't f***ing do it....what a let down!!
Click to expand...

"Do you sleep with that thing under your pillow?"
"I would if I slept"

Cap'n Mike said:
"Do you sleep with that thing under your pillow?"
"I would if I slept"
Click to expand...

Spider Jerusalem said:
First thread of my own. Neat.

Been thinking about guns in movies. Not the inaccuracies- which often abound- but the firearms themselves and the context we see them in. The context creates a response just as any other image (cigarettes in old movies look 'cool', etc), and people form a fantasy built on the context, more than the item itself.

As an example, when the second John Wick film came out, I decided I *had* to own a Glock. Preferably a 34. Keanu made that gun sing during training, and it looked amazing on film. Sure, Glocks are great guns, but there are a lot of great guns.

When I finally purchased a Glock (wasn't a 34, but it wouldn't have mattered), I was underwhelmed. The grip is uninspired and bulky. The slide looks like a squared off block of steel. The stock controls (slide release especially) aren't really great looking or user-friendly. The frame is plastic. It flexes easily when you take it apart. It shot accurately, never jammed. It was just... fine.

And so, I sold it. I couldn't get rid of it fast enough, and have kind of sworn off Glocks as a result. Not because of any technical fault, but simply because once taken out of the specific context that made me like it, I found there wasn't much left to hold me.

Anyone else have a similar experience?
Click to expand...

What is an "inspired" grip? The double-stack Glock grip is bulky and not comfortable for those with medium or smaller hands. The slide is a squared-off block of steel. It is designed to be as concealable as possible with nothing to snag or stick out. A good contrast is the SIG P320, which looks like a fat pig with too much makeup. The SIG also has a fat grip, but is rounded at the corners. The SIG X-grip is much closer to "inspired" for me. The Beretta grip has an excellent shape which is also too large for my hands. But CZs are also "inspired" to my hands.

The slide lock lever is not meant to be a slide release. Glock's own literature refers to it as a "slide lock". But if you had bought the 34, you'd have seen that model has an extended top edge that functions very well as a slide release.

I've never fired a Glock while it was taken apart, so I didn't care about the plastic flexing.

The minimalist, sleek, purposeful look of the Glock fits my view of function driving form in a near-perfect way. From an engineering point of view, I like it more than most others.

An aside: I am much amused by customers who attempt to drop the slide using the slide lock/release lever while an empty mag is in the pistol, struggle with the effort, and then criticize the pistol. The combination of pressure from the slide spring and from the mag spring makes this quite stiff. But one would never do that in real life. You would "slingshot" a pistol (if you do) after reloading, at which point the mag follower is not pushing against the lever.

I remember it from the range scene in Lethal Weapon.
View: https://youtu.be/3aSdLAndoJU?t=5

I was disappointed when I found a holster was safer and more secure than just carrying a pistol in my waistband.

Mosin. Bought two of them years ago and hated them.

Guns in the movies

Why are guns sooo fake in movies?
2