Just when you think this woman can't say something dumber than the last thing she said...

"I don't know what else it takes but I don't believe we can stop at the door of the United States House,” Jackson Lee told reporters in the Capitol building.


“I believe there will have to be an emergence of members of the House flooding the United States Senate for Senator McConnell to understand that these initiatives today, my gun storage bill, my bill that I've introduced dealing with the caliber weapon, I've held an AR-15 in my hand, I wish I had it,” she continued, holding her hands out as if she had the gun right there.

“It is as heavy as 10 boxes that you might be moving and the bullet that is utilized, a .50-caliber, these kinds of bullets need to be licensed and do not need to be on the street,” Jackson Lee claimed.

AR-15 rifles use much smaller ammunition that .50 caliber rounds, and most rifles weigh about 6.5 pounds, or 7.5 pounds when loaded with a 30-round magazine.

While the actual total weight of 10 moving boxes is arbitrary based on their contents, one can safely assume they weigh more than 10 pounds.

Jackson Lee’s assertion that AR-15s shoot a .50 caliber round was also grossly inaccurate.


The ill-informed congresswoman was stumping for three bills she co-sponsored “designed to stem the tide of gun violence” when she made her outrageous claims.


The proposed measures create gun storage laws, a new background-check process, and limits as to where ammunition can be bought and sold, according to Jackson Lee’s website.

Gun enthusiasts have called all three measures violations of their Second Amendment rights and far too overreaching to even be considered.

The legislation, passed by the House, has hit a standstill in the U.S. Senate, where Republican Majority Leader U.S. Senator Mitch McConnell (R-Kentucky) has showed no interest to taking the measures further.

Democratic lawmakers behind the so-called gun control legislation have repeatedly demonstrated their ignorance on the subject while calling for sweeping reforms that only affect people who actually own and use firearms.


U.S. Representative Carolyn McCarthy recently had to admit to Tucker Carlson on FOX News that she had no idea what the “barrel shroud” featured in her “assault weapons” bill was, according to AmmoLand.

“But some of these bullets as you saw have an incendiary device on the tip of it, which is a heat-seeking device, so you don’t shoot deer with a bullet that size. If you do, you could cook it at the same time,” Eddington said.

Watch Jackson Lee talk about her experience with an AR-15 below:

I wonder what Grandma Sheila would do if there were a few bad guys trying to break into her home and the only thing between her grandkids and the bad guys was a loaded AR15...?

She is not even a high functioning moron..

Jokes on you guys. She was holding a Beowulf AR and says anything under .50 is for pxxsies.

On the topic of what a "moving box" weighs, it depends on whether you have friends like mine or not.

Can we just give all these useless c***s California and call it a day? Why do us sane Americans have to suffer.

rivet_42 said:
On the topic of what a "moving box" weighs, it depends on whether you have friends like mine or not.

Well if an AR-15 really weighs 300 lbs, what's she worried about? Imagine trying to carry that to a gun-free zone, along with all that giant .50 caliber ammo, and going on a shooting spree with that.

I stole your link and used mine for her page 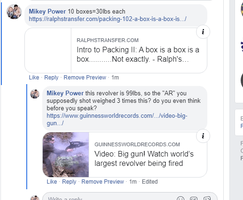 She kind of reminds me of this guy:

Prepper said:
Well if an AR-15 really weighs 300 lbs, what's she worried about? Imagine trying to carry that to a gun-free zone, along with all that giant .50 caliber ammo, and going on a shooting spree with that.
Click to expand...

“But some of these bullets as you saw have an incendiary device on the tip of it, which is a heat-seeking device, so you don’t shoot deer with a bullet that size. If you do, you could cook it at the same time,” Eddington said.
Click to expand...

That was taken from a Babylon Bee article. Right? It has to be.
P

Actually she was holding a Barrett M82.
She was simply misinformed.

It gets more and more frustrating to try to counter their abject (and proud) stupidity.

Oh my! If a US rep said that it MUST be true! She's a government official! She knows what she's talking about!
Sadly these are "legislators" who get to make and pass laws on topics on which they know less than nothing.
So much of the gun legislation that gets proposed and often passed here in Massachusetts is voted on by people who have never held or fired a gun. They vote based on emotion and "fake news" from various lobbying groups or simply their own ignorance.

Why don't we have a :facepalm emoji?

Hate to dupe an admin but...

Pisgah3840 said:
Actually she was holding a Barrett M82.
She was simply misinformed.
Click to expand...

most likely, but that doesn't fit the narrative

Elected officials should have been bound by the constitution for false speech. This single instance should be grounds to impeach her, result in removal and result in a lifetime ban for all public offices.

The idea reps can blatantly lie to citizens and propose legislation based on those lies is fraud plain and simple.
J

A guy at my range was shooting a .50 Beowulf AR recently, they exist. They're also really obnoxious to be near when someone is shooting them! I wouldn't want to be at an indoor range near one.

mikeyp said:
Hate to dupe an admin but...

Jackson Lee: House Members Will Have to Start 'Flooding' the Senate to Get Gun Control

Saddest part is all the ignorant people will take her word as gospel! And the snowball continues to roll...

Location
Somewhere around Barstow,on the edge of the desert