I have many concerns and I have not even seen the text of the bill.

The governor said he fixed flaws in a 2019 version of this proposal that he vetoed last spring.

Sununu and Sen. Jeb Bradley, R-Wolfeboro, showed off their work on the first day to officially file legislation for the 2020 session.


“I have long believed one of the foremost responsibilities of government is to protect those who cannot protect themselves,” Sununu said in a statement.

“When I vetoed House Bill 696 this summer, I did so because it reduced the protections available to domestic violence victims. I pledged to work with the Legislature in a bipartisan manner to make sure we got the bill done right. In close partnership with Senator Bradley, we have accomplished that goal and look forward to working with Democrats, Republicans and the many interested stakeholders to get this done.”

A group of strange bedfellows worked for markedly different reasons to kill this bill last spring.

Gun-rights groups and domestic advocates had urged Sununu to veto the measure.

The bill would enable elders and other vulnerable adults, along with their guardians or lawyers, to seek protective orders similar to those that victims of domestic violence and stalking seek from judges.

“The state must be able to provide a legal pathway to protect vulnerable adults from abuse, exploitation and neglect from those who would take advantage of them,” Bradley said. "This legislation I filed today improves upon past legislation to protect this population from the tragic occurrence of physical, mental and financial abuse. I am grateful to have worked with Governor Sununu on this bill and look forward to working with stakeholders and my colleagues in the Senate and House to get this bill to his desk.”

"I'm pleased to see the governor follow through on his promise to find common ground," said Cushing who had not seen in advance what Bradley and Sununu have now proposed.

"I think this dramatically improves the odds we actually get something done in 2020."

Different versions of House Bill 696 made it through the House and Senate, with support from most Democrats — and solid opposition from all but a handful of House Republicans.

When a committee of conference took it up in June, lawmakers agreed to remove the gun-confiscation language to save the bill.


The New Hampshire Coalition Against Domestic and Sexual Violence came out in opposition, saying the victims they represent could get the wrong kind of order as this bill was written.

Cushing had offered an amendment the coalition wanted but the conference committee rejected it and Sununu's veto message carried much of the coalition's argument.

In his veto, Sununu also mentioned “the real possibility that an individual’s Second Amendment constitutional rights could be violated without judicial oversight.” And, he said, “Other advocates have raised legitimate concerns regarding Fourth Amendment considerations.”

Cushing has re-submitted his own bill for 2020.

"We had been working with the coalition to alleviate their concerns," Cushing added.

design said:
The bill would enable elders and other vulnerable adults, along with their guardians or lawyers, to seek protective orders similar to those that victims of domestic violence and stalking seek from judges.
Click to expand...

What is preventing these vulnerable adults from seeking protective orders now?

Bipartisanship is a fools errand. 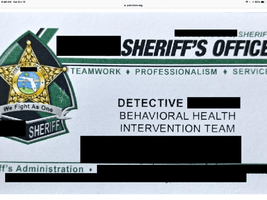 NH Public Radio characterized the vetoed law as one designed to protect the elderly from being financially bilked by charlatans and greedily relatives. All good aims that don’t require firearms to be seized without due process and medical/mental evaluation and assistance.

Read Cops in Lab Coats from a lawyer who defends those EPRO’d in FL Red Flag Laws - Blurring the Line Between Policing and Mental Health Care - Parris Law, PA

“Police departments are creating special “mental health units” to address perceived psychiatric situations within the community. Law enforcement personnel are walking around with business cards that read “Behavioral Intervention Specialist.” Police departments are creating files on citizens whom they suspect might have a mental illness and making unannounced visits to their homes and the homes of their family members to “check in.” This type of law enforcement behavior indicates to me that police have completely lost touch with the constitutional contours of their powers.”

“Two innocuous social media posts shared by a Broward County, Florida gun owner were enough to lead authorities to temporarily confiscate his firearms, according to the man’s attorney. Kendra Parris told Reason her client posted a photo of an AR-15 rifle he’d built, along with a comment, “It’s done. Hooray.” He also criticized teen gun control activists, claiming they were infringing on people’s Second Amendment rights, in another online comment. Authorities obtained a temporary gun confiscation order based on the two posts. However, Parris said she was able to convince the city to drop its petition for a final order.”
Red Flag Story: Man Loses Guns for Posting Pic of AR-15

Just posting here will become evidence that you need this type of "justice."

Everything isn't always about firearms. Some people are legitimately mentally ill and need help. Those people often don't get the help they need unless it is compelled. There are also people that are older, have dementia, whatever else - and are taken advantage of.

I am NOT supporting the red flag erpo bs.
J

Anyone manage to find specific language on the bill yet?

Concord Monitor.com said:
Sununu said this week he is backing a bill drafted by Republican Sen. Jeb Bradley. The new bill removes a provision from the vetoed one that would have allowed police to confiscate guns and other deadly weapons from those accused of abuse, exploitation or neglect.
Click to expand...


jpk said:
Anyone manage to find specific language on the bill yet?
Click to expand...

W
New Mexico Gets The Next Red Flag Bill
2