I am sooo excited about this project! Bulgarian Krink demil kit all orig including barrel, and all the parts serial numbers match!
Not sure if I want to make this into a pistol, or SBR it. Just feeling the Soviet love 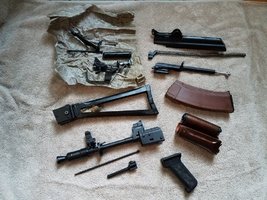 Got tired of looking for one of these used so I bought a new one, M57 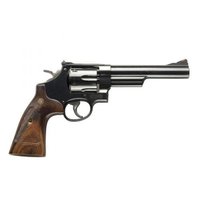 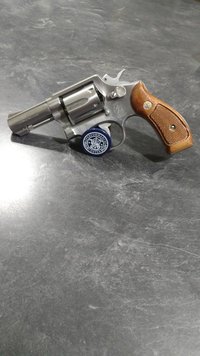 One of two 4" S&W 19-3 revolvers I picked up this month. Second one is on its way. Pictures don't do the blueing on this gun justice, its a beauty. 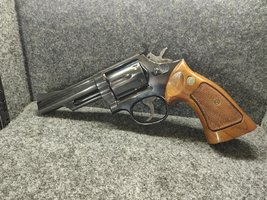 Got two new to me toys coming in:

Should have both in my hands next week.

AK pistol in 7.62 x 39 on an AR type receiver.
Bring it on you AK purists. First free state purchase. 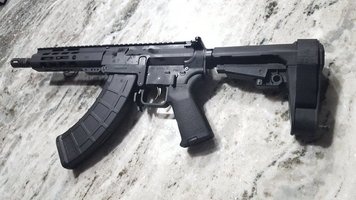 Very nice!! I see nothing wrong with this at all. The key thing is: it takes AK mags.
And I'm sure all other AR parts fit just fine. Nicely done

One week in and up to 3 so far. Having a pretty good time. Then again my birthday was Monday so somebody had to buy me what I wanted. haha The Grand Power Stribog came in on Tuesday and took it out yesterday and it just shred through rounds right out the box. Didn't even need to zero threw the dot on it from my other gun and it was shooting 2ish inches low at 50 yards but had zero shift in windage. Burned through half a case of federal 115/124gr and then two 50ct boxes of Federal 150gr HST HP. Of which one was just dumping the rounds to see if it choked. Flawless. If that continues I'll have nothing bad to say about this gun.
I don't like shooting my original 210 much so I also got a target 210. Would have preferred getting a standard model, but there's always an excuse to get another later. Thing prints like you would expect. Had fun ringing steel out to 100 with it. Then lastly a model P14 Eddystone .303. Still matching only thing missing is the unit disc was plugged. But didn't pay much for it, so there is that. 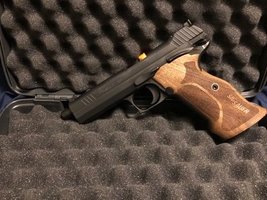 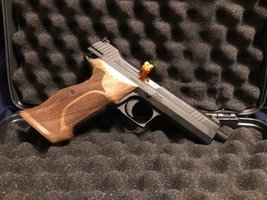 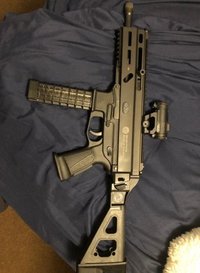 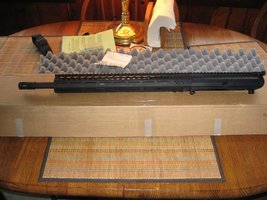 Not sure what it is, but it shur is pretty.

I picked up a Springfield Hellcat. I like this pistol, I quickly dumped 100 rounds down the range at the shop and it was flawless. It weighs in at 678 grams vs my Sig P365 at 662 grams. Remember the Sig is 12+1 and the Hellcat is 13+1. Additionally the Hellcat has 14 rounds of Corbon vs 13 rounds of the 365 9mm. I didn’t check the grain differences. The trigger isn’t shit but it’s not great either. It’s fine for a carry gun but I will watch for Apex or a better aftermarket trigger. I really like the sights and the ergos suit me nicely. I may like the fit better than my Sig 365. I was able to figure out how to grip it without the Grip Zone, took a minute but I’m smartish.

Here is it with a 458 Lott for reference. 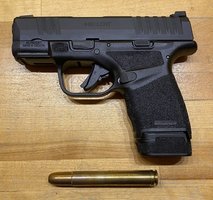 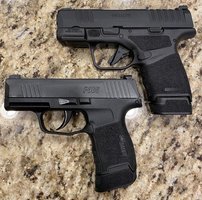 Gartman Arms put this on the shelf at 11:00 today. I called about something unrelated at 11:29 and the guys were excited to share that their stock of ONE came in, ordered after the January 2018 SHOT Show. TS12, an Israeli 15+1 12-gauge FREIGHT TRAIN! 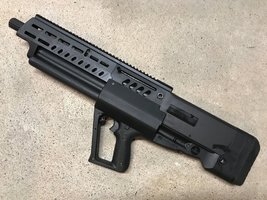 I asked when another would be in stock and they just laughed. Apparently the only Tavor 7 they ever received was also gone same-day about 3 months ago.

A pair of early Obendorf Mauser K98s. S/42G early import, and S/42 1936 RC. The G is in a correct type flat butt tiger stripe walnut WaA4 bSw stock. The G bolt is early Weimar Obendorf and matches itself. The trigger guard, floor plate, and follower are Erma and match each other. The S/42 is a straight up RC in "original" condition; blue black refinished metal, flaking shellac, and EP'd to match. A nice bonus on this one is that it sits in a mismatched but correct Obendorf Weimar walnut flat butt plate stock. I added the cleaning rods and Israeli slings. They will become loaners 5 and 6 for my WW2 group. With some scrubbing and foamy bore cleaner, the bores turned out OK.

The final addition to my Luger collection.What I think everyone would call the Holly G 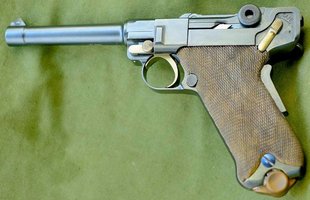 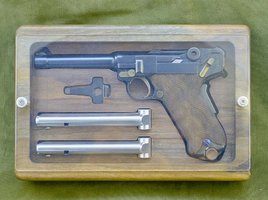 rail of Luger's,but first a little history. In
the early 1900 the US military was looking to adopt a handgun,so they purchased some guns from different manufacturers.
A thousand Luger pistols were purchased from DWM in 30 Luger, and given to the troops for trials in the field.The 30 Luger
was found to be a very weak round,so some of those trial guns were replaced with 9mm Luger's. While all this was going on
the US ARMY decided to have trials,all the manufactures that wanted to participate had to submit a handgun in 45ACP.
George Luger made some Luger's in 45 ACP for those trials.Well as we all know the COLT 1911 won,and the rest is history,but
what about those 45 ACP Luger's? Well one was destroyed,and the other few ended up in collectors hand,and even in a museum.
One was once sold for a million dollars,but some years latter it only sold for $500,000. A gentleman by the name of John Martz's
tried to reproduce the 45 Luger,but his gun's had many issues.Now comes along this guy by the name of Eugene Golubtsav
also known as the Lugerman,and obtains the original blue prints to the 45ACP trials Luger that George himself had made.
Eugene makes like only 50 a year,and there is a waiting list.Is it cheap no,is it worth it hell yea!

This diversity stuff has gone far enough. Next thing you know men wearing dresses will want to use the women’s room. lol

After many years of thinking about it, finally decided to get into muzzleloading. 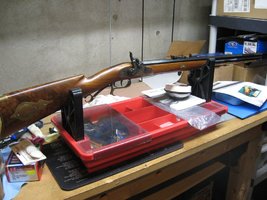 This month is a Glock 17 lower that I made my own. 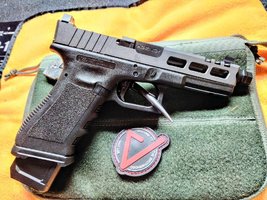 It wasn't great, but not terrible by any means. Rifle isn't new (CZ557 Varmint I got it in April and have been sitting on it), but the optic is! Shooting was done at 200Y will be taking it out to stretch this weekend. Nikon FX1000 6-24. Actually compares very well to my Vortex PST Gen 2, but I got this on sale from Eurooptic for a very good price. 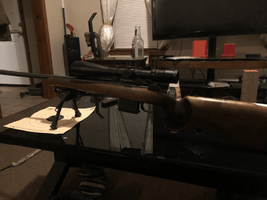 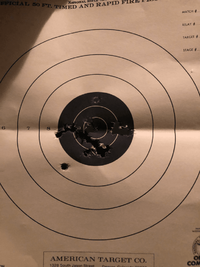 Here’s my latest Dan Wesson acquisition! A gorgeous Monson 722 (22lr for anyone wondering) that came with 8" and 6" barrel assemblies, scope, DW patch, pachmyer grips, and barrel tool. I bought the 2.5" barrel assembly a couple weeks ago from DW.

It’s a beefy revolver with that thick cylinder and barrel. Great addition to the DW family. 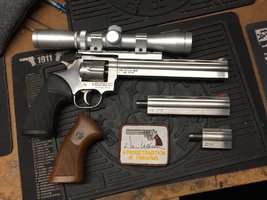 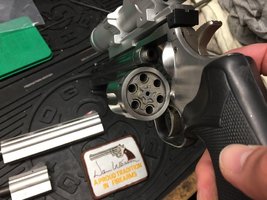 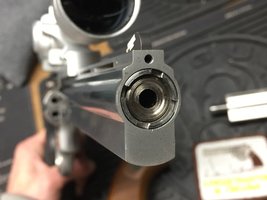 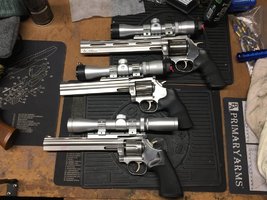 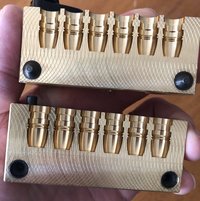 What caliber is the mold for ?

kope said:
What caliber is the mold for ?
Click to expand...

andrew1220 said:
Here’s my latest Dan Wesson acquisition! A gorgeous Monson 722 (22lr for anyone wondering) that came with 8" and 6" barrel assemblies, scope, DW patch, pachmyer grips, and barrel tool. I bought the 2.5" barrel assembly a couple weeks ago from DW.

effing awesome. Thanks and enjoy

Got a new pocket carry. Only posting because 1st free state Glerk 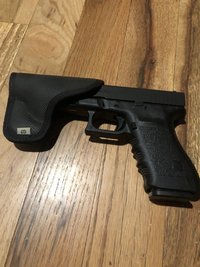 Found a couple of interesting milsurps this month...a Finnish M28 still full of cosmoline (I only gave the receiver and bolt a quick wipe down) and a K98 barreled action (byf 42) that just needs a stock to be complete.