Can you get a pocket clip installed on a buck 110? I like mine, but unless I'm hunting I hate carrying it on my belt, but it doesn't ride to secure in my rear pocket and is intrusive riding in my front pocket. I think a wide, sturdy pocket clip would fix that.

Year ago Case knives came out with a slim line trapper with a pocket clip and thumb-stud, its perfect, though not as beefy as a 110 of course.

I've seen it done on the brass bolsters, not the nickle (potential to flake.)

I'll get you some pix. How are your light-duty machining skills...? 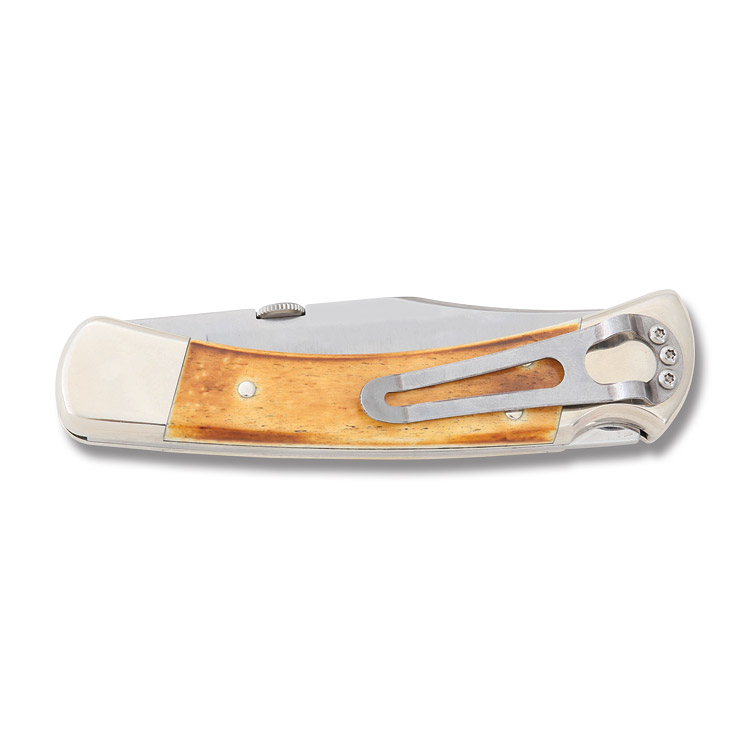 Oops, found on in nickle... 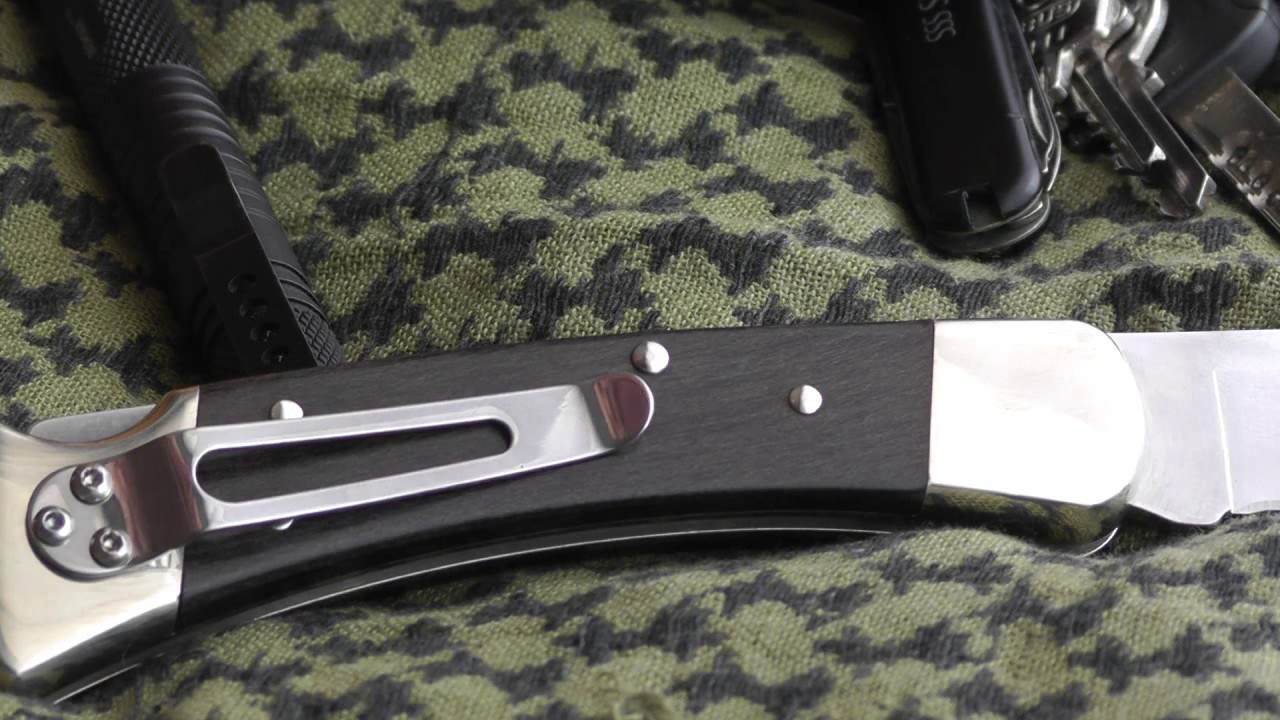 There are also some sweet little open-top sheaths out there... 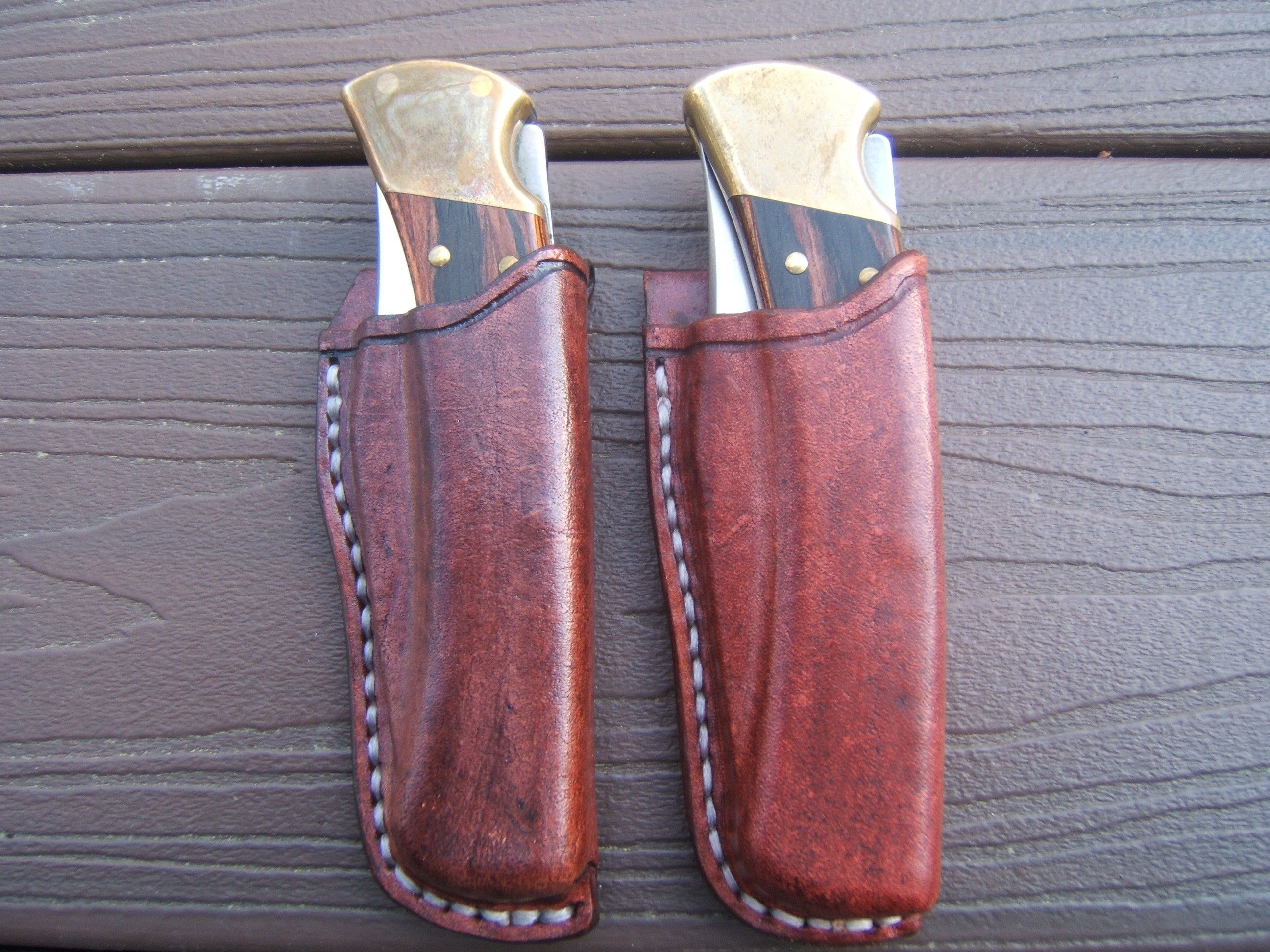 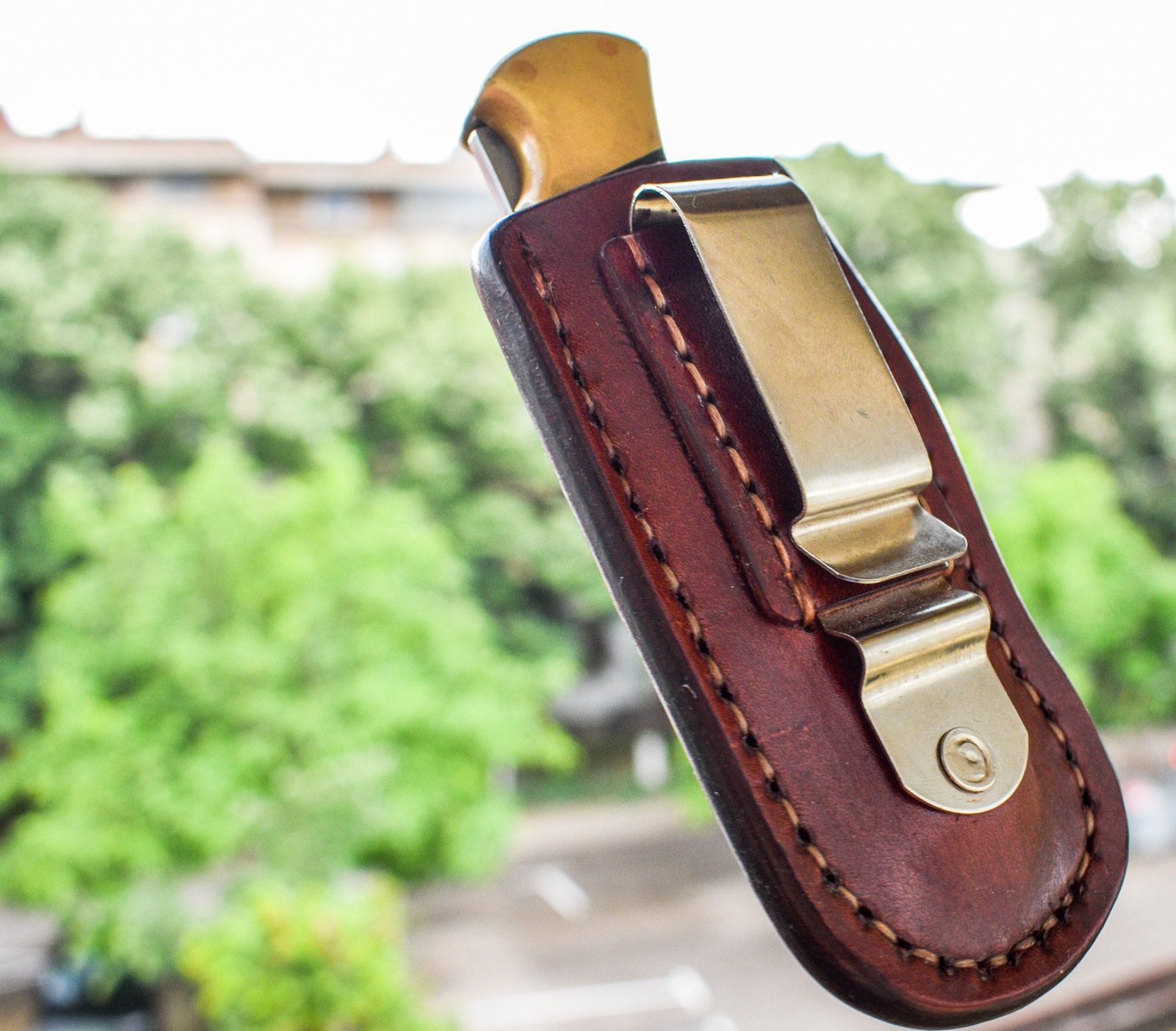 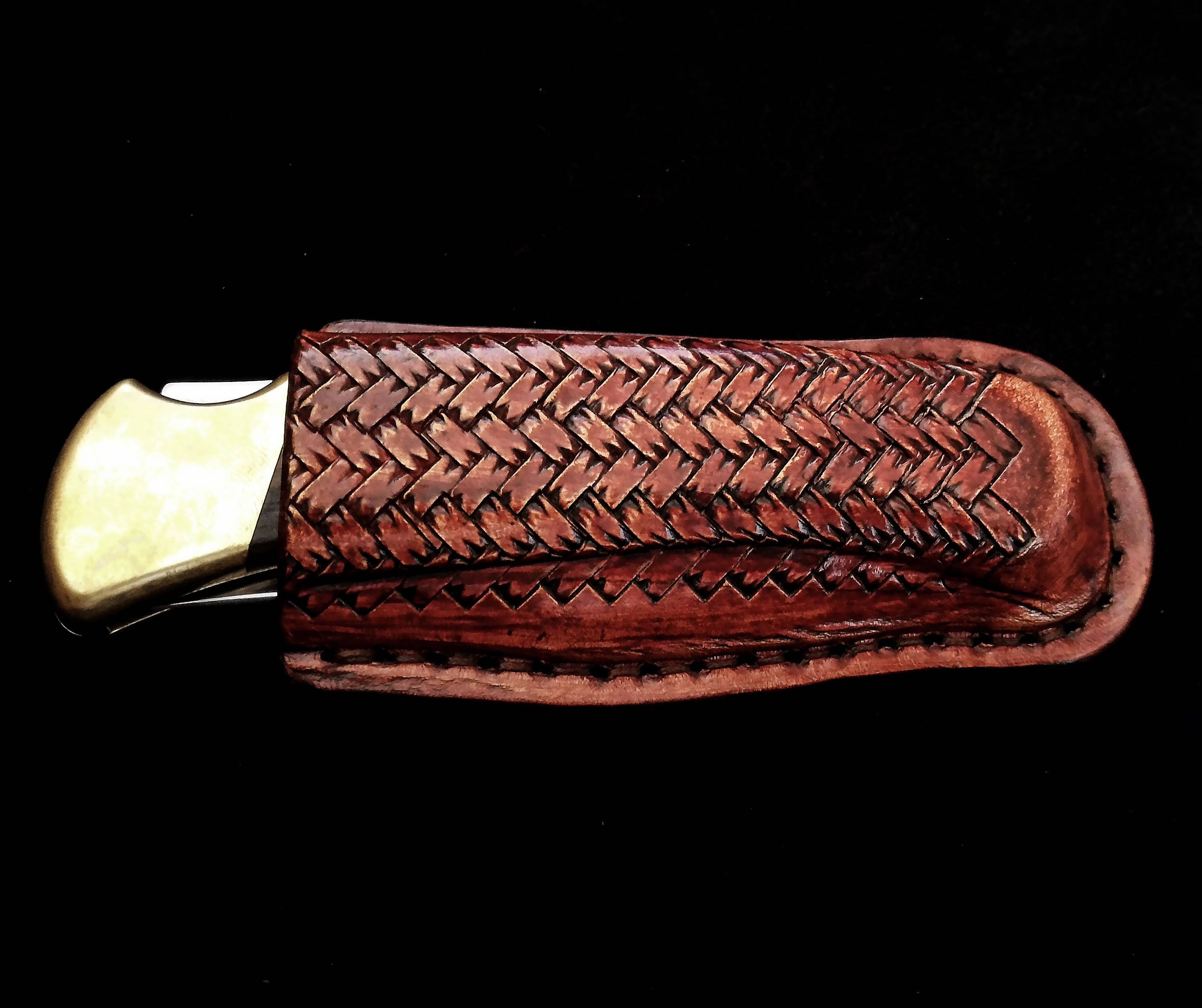 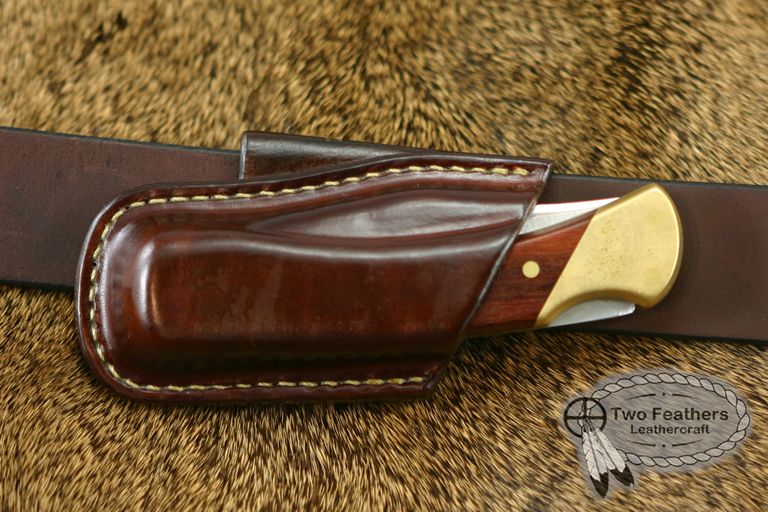 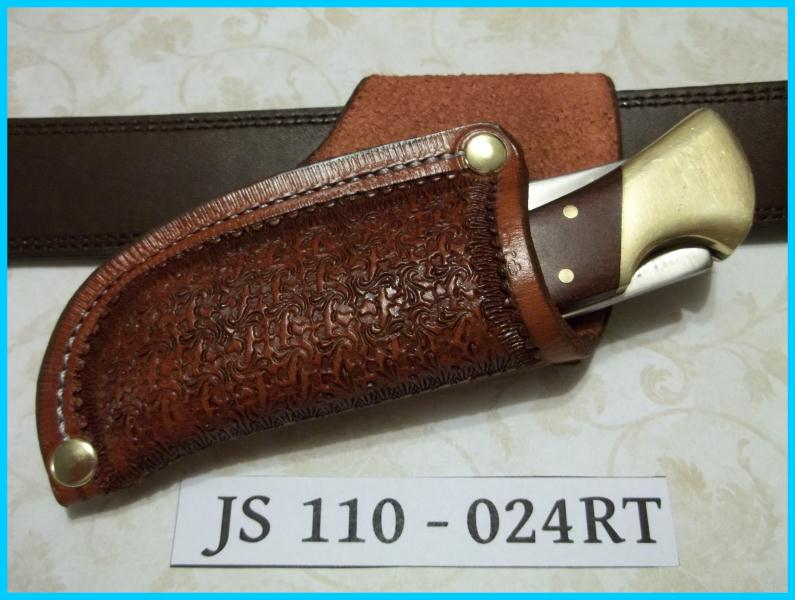 Thanks enbloc. I was talking about this with a buddy whos a knife guru, he recommended the 110 slim pro. I checked it out and that's about as perfect as I could want it to be. As for my machining skills....I could handle it, but if I boogered it up i'd be beyond pissed. Figure it couldnt be but maybe $40-$50 to have one installed professionally so its sturdy and looks nice. I might try it out if I come across an older beat up 110. Not gonna try it on my 110 Auto Elite.

This says it all my friend...

Besides, I can't think of a better reason to buy a new Buck.

The only Real Question is:

These counterparts have been placed into two different product levels utilizing Buck’s “good-better-best” product levels that assign knives into different categories to help guide customers to the right kind of knife. The Pro level features a premium S30V steel with Micarta® and G10 handle options. The Select version, priced significantly lower, features Buck’s standard 420HC steel and lightweight nylon handles. All blades are finished with Buck’s advanced Edge2x™ technology that makes them sharper out of the box, hold an edge longer, and easier to re-sharpen. All are made in the USA and backed by Buck’s respected Forever Warranty.

This new slim line includes a thumbstud for easy one-hand opening and lockback design for safe use. The stainless steel, deep pocket carry clip featured on each knife is removable and reversible to allow for quick and easy carry. The Slim Selects feature nylon handles and is offered in black, red, blue, and chartreuse colors. MSRP: $38-$42. The Slim Pros are offered in OD green or brown Micarta® as well as a black G10 version. MSRP: $100-$110.
Buck Knives Slim Series 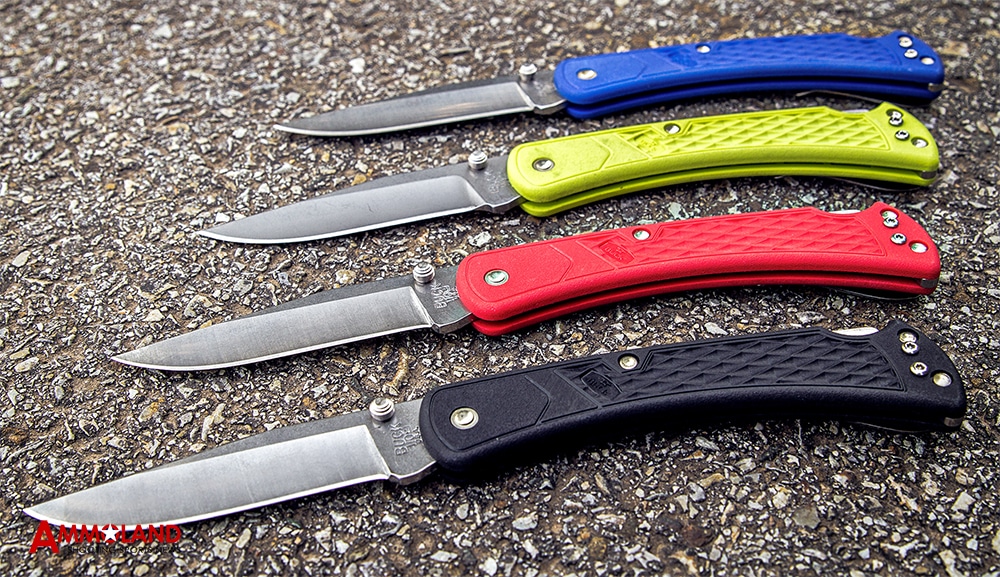 enbloc said:
The only Real Question is:

mr. enbloc, you're a buck slut!

they do make a good, solid knife though, don't they.

Just picked up the Buck 110 Slim Pro in green. Absolutely love it.

Buck 110 Folding Knife with fishing scene engraved on the blade 1974-1980 One dot on each side of model number. This knife was made as a special project in 1978 by Buck. The deep black etching in the blade was done by Aurum in Texas. Aurum etched many different blades for Buck in the 1970s and 1980s. My wife inherited this knife. 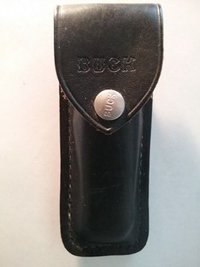 Rob45 said:
My wife inherited this knife.
Click to expand...

pretty nice buck. i'm not totally familiar with bucks but never seen anything like that before. i'm gonna download your photos for my own use if it's ok with you @Rob45 thanks for posting them.

Love the depth of the etching and the shadowing that goes along with it. Add to that the black coloration being so dark and complete says this Buck is a Winner!
A little TLC on the bolsters and it will really 'pop'...
~Enbloc

That 'Made in America' leather belt sheath is in great shape also. Worn but not abused... and well maintained. (don't let it dry out...)

Mexican leather sheaths are utilitarian and durable but 'American' they ain't...
R

First attempt with a little TLC on the bolsters, used the Miracle Cloth. 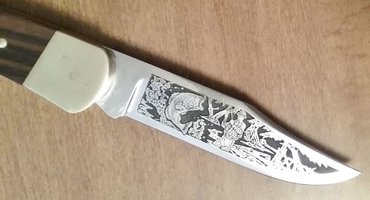 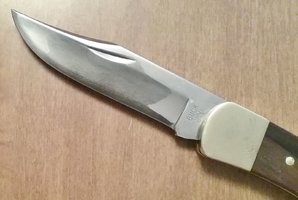 ReluctantDecoy said:
Nice looking knife, but would a MA resident be able to buy that? Doesn't look assisted.
Click to expand...

You can buy it, but it’s illegal to carry in public. Legal to keep in your house or on your property though. I’ve ordered several automatic knives from BladeHQ and they have no problem shipping to MA.

Tell us more about how your wife 'inherited' it...
R

Tell us more about how your wife 'inherited' it... enbloc


My wife inherited the Buck 110 Aurum Fisherman from her late husband. Walter passed away 25 years ago, he was a Vietnam Veteran. He was a Combat Medic in Vietnam and a RN in the ER in his civilian profession.

He once had a patient who showed him a special knife that he wanted to hand down to his son. Walt got the idea and purchased this knife to also pass on to his son. However they never had any children.

My wife showed me the knife so I could research and see if it had value to a collector. I had no idea Buck knives had a following.

Buck Knives answered my email with: “Thanks for sending the email inquiry. The knife was made as a special project in 1978. The deep black etching in the blade was done by Aurum in Texas. Aurum etched many different blades for Buck in the 1970s and 1980s. When they went out of business, Buck purchased the equipment and brought the process in house for several years before finally discontinuing it in favor of laser etching.”

Rob45 said:
so that would have been a significant purchase for Walt in 1978.
Click to expand...

And worth every penny! Only thing better than the Buck, is the story and the Man behind it, and of course your wife.
~Enbloc
R

And worth every penny! Only thing better than the Buck, is the story and the Man behind it, and of course your wife.
~Enbloc
Enboloc: Your comment brought my wife to tears. 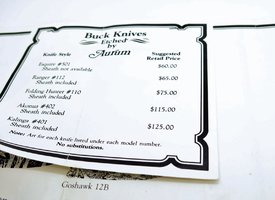 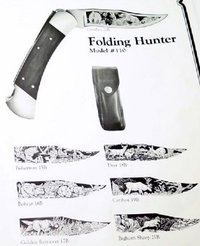 She's the real Hero of this story. All my best.
~Matt

I knew I'd find something here on Buck Knives, my favorite brand of knives. I have owned (and lost ) Buck knives since I was 10 years old, the first being a 110 which my dad gave me for my tenth birthday in 1966. He had good taste.

I carried that until I was in the Navy and lost it hiking somewhere in the San Jacinto Mts in Southern California. I had forgotten to completely zip one of the compartments on my pack and it must've dropped out. To say I was sick when I realized it was missing is an understatement. I considered back tracking to see if I could find it but it would've set me back at least six hours and I needed to be back in San Diego that night. I hope someone is still enjoying that knife today. I immediately went to the base exchange the next day and bought another 110 and while I was paying for the 110 ($18, as I remember), a 119 Special caught my eye so I bought them both. At the time I was stationed in San Diego, I was a short drive from the Buck factory in El Cajon where they were at the time. I got to tour the factory and they would sharpen knives for free back then when they had an open house. Now they are in Idaho. It seems it was a good move for them.

I still have the 110 but I seem to have misplaced my 119 that I bought that day. I think I took it to one of my kids houses and never retrieved it. I still believe it's around somewhere and it and I will find each other again someday. In the meantime, I bought another one a few months ago.

Funny story about that original 119...In the late 80's, like an idiot and I knew better, I was using it to try and cut a block of frozen hamburger in half tapping the back of it with a plastic headed hammer (not really hard) when the blade broke in half. I sent it to Buck, telling them exactly how it broke and could they replace the blade and charge me for it. A few weeks later I got a brand new knife in the mail. That's service! I even called them when I got the knife back and offered to pay for it. All they said was the one I sent them was certainly not the worst they had seen and that it should not have broken like that, even tapping it on the back with a hammer..."bad steel" he said... LOL.

Over the intervening years, I have bought a Buck 117 which is a smaller version of the 119 Special and I also just recently bought a Buck 212 (with the phenolic handle, not the fancy one they came out with a couple of years ago) which I love but don't really like the scabbard/sheath. I have been looking for a decent one for it but have come up empty handed. I'm wondering if anyone knows someone that that makes knife sheaths? I don't like fancy leather work, just a simple leather sheath that's wears well and holds the knife in with a strap and snap. The one that came with the 212 is kind of flimsy and just doesn't feel secure.

I just ordered another standard 110 the other day from Copper and Clad so I can put my older one in the safe. It's been my EDC since I bought it in the mid 70's and I really don't want to misplace it, which I seem to have a penchant for doing. I even have the original leather sheath that it came with.

Location
The peoples republic of Massachusetts

I needed a better quality hunting knife so I purchased a buck 657 pursuit pro large with a fixed blade and gut hook a few days ago.
I love it and should never have to buy another hunting knife. 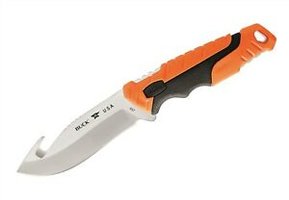 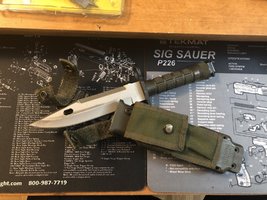 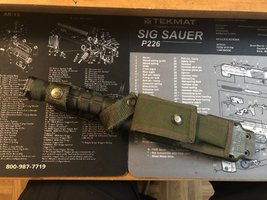 Bought this 110 finger grove folding Hunter at Pulaski Barracks in Germany. The / dates it to 1993. 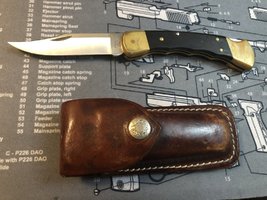 Sweet offerings Cap'n.
But more importantly: Thank you for your Service.

Not a great pic but here’s my 110. It’s been around the block a few times as it was my late father’s for years. Probably about 40 years old. It stays in my edc backpack. I don’t use it much but it’s one of my favorites for sentimental reasons.

enbloc said:
This says it all my friend...

Besides, I can't think of a better reason to buy a new Buck.

The only Real Question is:

I hear the natural micarta takes on a nice patina. Another great knife thread enbloc! If I don’t win on a vintage Victorinox, I may go up to Kittery Trading Post and pick up an automatic 110. I should have a 110 anyways.

WTS Awesome Ripper Carbon-fiber and Titanium folding knife, in the manner of 'Direware' ?