Just thought I'd start a thread on one of my favorite American Made Knife Companies. BUCK U.S.A.
Feel free to add comments, reviews, questions and photos!

I want to start this off with a video that leaves me drooling.
When speed and style meet...

enbloc said:
I want to start this off with a video that leaves me drooling.
When speed and style meet...

Nice looking knife, but would a MA resident be able to buy that? Doesn't look assisted.

That is a great looking knife. I've had a few 110's over the years, would love to have that one.

The Buck 110 Auto is absolutely not Mass Legal, as it is basically a switchblade.
I luckily spend most of my time in New Hampshire.
I wouldn't go out of my way to return it to home though if I was out with it in Mass.
I'm just not that much of a "Law" fan...

I thought they were legal to own but not to buy, sell or carry?

Still got a Buck folding lock blade that I bought at the tiny PX on my compound in South Korea, Jan 1976. One of the best constructed knives I've ever owned. Its tucked away in a bugout bag right now or I'd post a pic.

radioman said:
I thought they were legal to own but not to buy, sell or carry?
Click to expand...

I still have my first buck 110 that I bought in 1980 before I went in the service. I carried it every day when I was in and it still goes with me on a regular basis.

It is on its second blade as I broke the tip off digging out a slug. Buck replaced it under its lifetime warranty.

In MA ownership of autos is ok, you cannot carry them

I have mine that I bought at the PX at Caserma Ederle, Vicenza, Italy in 1987.
The leather case is almost worn through. It's in the back of my safe tucked away for one of my boys one day.
I love that knife...
Last edited: Oct 31, 2018

I've got a Bucklite MAX fixed blade in my hunting pack right now. Goes with me on every hunt. Blade sharpens well, the rubber grip has a good feel, and the nylon sheath is good quality. Same as this: 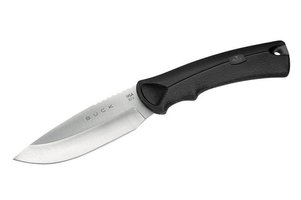 My Bucks are all tarnished. Same with my Schrades. I like one particular Schrade because it has a textured finish. Bucks are slippery when wet.

i own a 110, never used it. i haven't used a knife with a nail nick in years. but it's a super knife. the only thing i've cut with it is myself so far. it's one of those 50th year bucks. a member here was selling a few and got stalled on the last 2. i made an offer on them he accepted. i gave one to a buddy. i think i paid 30 bucks for the pair, a good deal to me. but a good beefy folder, for sure.

I've told this story before, but I'll add it here:

I bought a 112 (smaller brother to the 110, and I think a better knife) when I first joined the Army in 1990. Actually, I bought two - one to wear on my uniform and one to wear on my jeans. I was doing something that a typical 17 year old private would do with a knife (screwdriver, pry bar, something dumb) and I snapped the tip. No biggie, I thought because I had a spare. I then got a visit from the "good idea fairy" and ground the broken tip into a tanto blade. About 15 years later, I realized I lost the spare and wanted my old Buck back. I sent it to the factory with a note saying I was an idiot, and please repair and bill me. They repaired the knife for free (which I actually expected, despite me admitting it was in no way covered under warranty) and had it back to me in a week - which I did NOT expect. And it was MY knife, not a replacement.

Still one of my favorite knives. I add grip tape to the blade at the nail nick so I can open it with my thumb one handed.

I had a similar experience dropped a Buck112 30+ feet and broke the blade. I sent it back to them and they sent it back with a new blade and the rest of the knife nicely polished. I admitted it was my fault and they didn't charge me.I carried that 112 on my belt for many years and still have it.
I also have a 110 that I bought for $25? on sale a few years ago I still think a Buck 110 might be the best bang for your knife buck. (Pun intended)

Made In America too Baby!
G 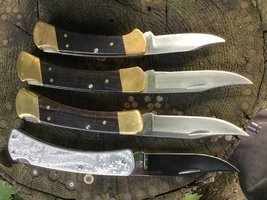 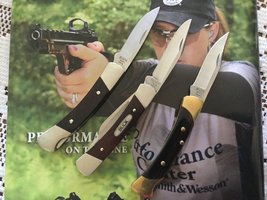 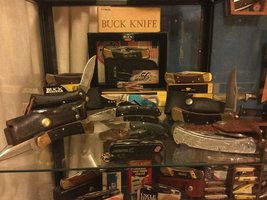 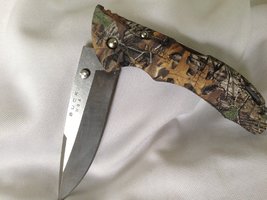 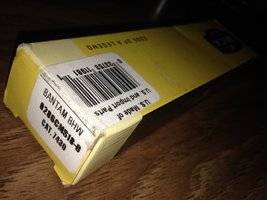 Could also have put this on the EDC knife thread. I decided to stop using vintage knives as my EDC after I nearly lost an old Rigid brass and wood folder (that had been in the family) at work recently. This Buck Bantam is really nice, caught my eye in the display case at the Natick Outdoor Store over the summer. Will try not to lose it but it is replaceable if I do...

Could also have put this on the EDC knife thread. I decided to stop using vintage knives as my EDC after I nearly lost an old Rigid brass and wood folder (that had been in the family) at work recently. This Buck Bantam is really nice, caught my eye in the display case at the Natick Outdoor Store over the summer. Will try not to lose it but it is replaceable if I do...
Click to expand...

Location
The peoples republic of Massachusetts

I have a buck 110 that my grandfather gave my dad and my dad gave me. It is in excellent condition and it still has the original leather sheath.
I bought a knife at Walmart in Massachusetts (Kershaw 16700LBLk) that has a spring assist open. I carry it daily but after reading some of the posts above I am concerned that it is not legal to carry.

If you are that concerned, you could probably remove the scales and disassemble the spring, and use it normally. In the case of the Blur it is a torsion bar.
(save the parts in case you move to NH...)

Shouldn't be too hard...

(Not your Blur, but you get the drift.) 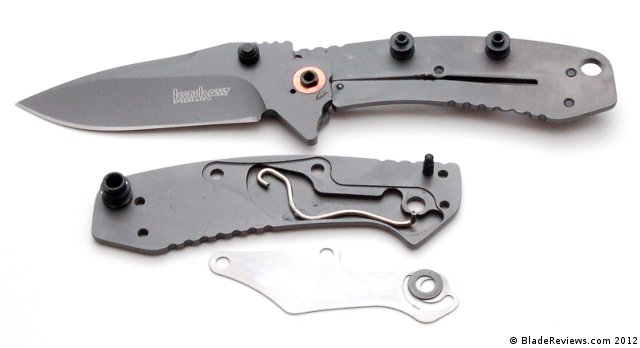 roccoracer said:
I bought a knife at Walmart in Massachusetts (Kershaw 16700LBLk) that has a spring assist open. I carry it daily but after reading some of the posts above I am concerned that it is not legal to carry.
Click to expand...

spring assisted is legal in mass, so far. it's not a push the button automatic. besides, the fact that you bought it in a walmart in massachusetts tells you everything you need to know, you think they'd have it on the shelf if it were a no-no? while not a legal barometer a pretty good indicator. i use to sell knives at the shows, had a couple of tables up until a few years ago and was pretty well read on the law. my biggest sellers were anything spring assisted from kershaw, probably cause people think they're the evil switchblade.

the 2 knives that will jam you in this state are switchblades and out the front automatics if you're carrying them on your person. legal to own and transport through the state, just not on your person. that's been discussed here before. and legal to buy out of state and bring back to massachusetts. i also don't believe they can be sold in this state and i'm fuzzy on this one, i think gravity knives fall in line here also

I AM NOT A LAWYER just so you know! if i'm wrong with my info, someone correct me, please.

Wish I had all the ones Ive lost over the years...

I feel your pain, I've lost more than a few myself. Let us know how the blade sharpness, ease of resharpening and overall mechanical durability holds up. Thanks.
~Matt

WTS Awesome Ripper Carbon-fiber and Titanium folding knife, in the manner of 'Direware' ?