In December 2019, Taurus USA announced the opening of its new U.S. manufacturing and operations center located in Bainbridge, GA. 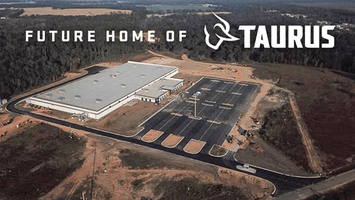 Taurus USA is holding a grand opening and ribbon-cutting ceremony on Dec. 5, 2019, for its new U.S. manufacturing facility and center of operations located in Bainbridge, GA. The firearm manufacturer’s move to Georgia follows an initial investment of more than $22.5 million in infrastructure and the creation of over 300 new jobs in Decatur County. The five-year plan foresees continued expansion in U.S. engineering and production for the Taurus, Rossi and Heritage product lines, and significant capital and resource investment in the Bainbridge area.

“All of us at Taurus have been anticipating this moment for some time,” said David Blenker, Taurus Holdings CEO. “It is the culmination of much hard work, intensive planning, and considerable investment in time and resources by many people—not only from Taurus, but also from the good people in the Bainbridge, Georgia, area. We are looking forward to this transition and the exciting opportunities this move will offer Taurus and its employees as we settle in with our new friends, neighbors, and co-workers.”

Taurus officially announced it was moving in early 2018, and ground was broken for the more than 200,000-square-foot plant in August of that year. Despite a subsequent delay in construction enforced by Hurricane Michael’s category 5 devastation, work was ahead of schedule by October 2019. That’s when the company began moving equipment from its Miami Lakes, FL, headquarters, where it had operated since 1982.

They have always made quality revolvers.

I call 'em like I see 'em.
Someone here's sig line says:
Isn't it amazing that an AR-15 in the hands of your average citizen is always an "ASSAULT RIFLE"
But in the hands of police w/a can attached last I witnesses it's always a "PATROL RIFLE"??
But there's no double standards.

right!!!!
Soon only the "crooks" will have firearms. Most today do anyway if they'd like one.
Wait, most .gov enforcement personnel have back-up w/armored vehicles.
Was'ent a standing Army in the USA declared & prohibited & against the BOR/Constitution?

Everythings illegal, ..........but as we all know money changes everything, and the .gov is the biggest, best funded, gang in town!

I wonder if they'll be making their R92 rifles at the new plant ???

I am intamatly and painfully aware of Bainbridge GA and this is a welcome op. The Zaxbys there is the best in the SE and they will do very well by this.

Tallahassee is also a stones throw South and tons of wonderful land between.

The comm college is also actually not bad.
T

Are they actually manufacturing anything or just assembling guns from parts made in Brazil?

I’ve had good luck with the Taurus I’ve had. Not so much with S&Ws that aren’t decades old. I like them and love their prices.

Good for Taurus. Never owned one, don't intend to buy one, but always good to see a gun company expand and succeed.

T-Unit said:
Are they actually manufacturing anything or just assembling guns from parts made in Brazil?
Click to expand...

I will most likely never own a Taurus. but, whatever they are doing, they are creating jobs here and looks like just in time, business will be great with the Presidential election. I just hope people dont get laid off when Trump wins again.

I have a 20-something year old 6" Taurus S&W Model 28 Highway Patrol clone that was given to me by my boss who had tried to disassemble and clean the clockworks.
He gave it to me in a box... and a baggie.
Cleaned, lubed and reassembled that sucker and it shoots great. Some of the older revolvers were made very well.
Best freebie gun I ever got...

Here's a stock photo of it.