Newguy1 said:
Are you going to get the triji nightsights for it, or bolt on a red dot?
Click to expand...

I'll likely be getting the triji's, I didn't really like the red dot on my friends 229 legion

minininjer said:
Hi Shevchenko, welcome to NES! Thanks for the intro post. We all love reading these, well, at least I do Congrats on finally getting that LTC! Get the P226 to a range yet? Can't go wrong with a Sig as your first beauty. Mine was a P238. Look forward to seeing your posts around the forum.

Shevchenko said:
I'll likely be getting the triji's, I didn't really like the red dot on my friends 229 legion
Click to expand...

JoeyS said:
Hey Everyone, newish member here, but first time poster with some questions. I used to live in VT and though I didn’t own a firearm, I had many friends that did and became familiar with the safe and fun use of firearms for shooting sports. When I moved down to MA, I eventually applied for and received an LTC, back around 2015. Unfortunately, when I attempted to purchase a Remington 870 at Dicks (in NH) I was denied by the NCIS system. After much digging and delay, I was able to figure out that the denial was the result of an individual with a similar identity being declared mentally incompetent in Colorado in 2013 (a year I spent in MA, so impossible for it to have been me). I let some time pass and figured I’d try again in March. Dicks wouldn’t even run my check due to the previous denial blocking me in their system. I went to Kittery, picked out a Mossberg 500, and then was denied again.

With my first LTC renewal coming in (back in June), I figured it was time to take care of the issue, and after a lot of research, submitted a motion to a Colorado county court, which was granted by the judge. The judge said the record would be removed from the NCIS system. Shortly thereafter I submitted my renewal application along with the court’s decision and it was granted. I then got my appeal granted by FBI/NCIS.

Unfortunately, it was very frustrating to find out that all of the “entry level” type shotguns were sold out by then, including the Mossy 500 and it seems they all still are.
So long story short, after 5+ years, still looking to make that first purchase! Any advice on where to look for something like and 870/500? Just looking for a general purpose shotgun, ideally something that I can get a few barrels for as I want something that’s good for defending my home/family, as well as occasional clay shooting and possibly hunting. Thanks!
Click to expand...

That's crazy, a few days ago I was out at The Gun Parlor in Worcestor and a guy there was explaining a similar story, he was there almost 2 hours before being told his check came back as "Delayed" so he couldn't buy that day.
B

Wow! Just found you all and from my general browsing so far I am feeling so darn at home already, thank you my fellow 2a loving Americans from the not so great state of CA . Freedom lovers from around the world not to be left out as well.

Blown454 said:
Wow! Just found you all and from my general browsing so far I am feeling so darn at home already, thank you my fellow 2a loving Americans from the not so great state of CA . Freedom lovers from around the world not to be left out as well.
Click to expand...

Hi Blown, welcome to NES. All states (and countries!) are welcome here

New member, newish shooter. I’ve only had my ltc for about 2.5 years. Ya I know, I should have gotten it sooner. I have a few handguns in the cabinet but no rifles as of yet. Always itching for something new but most times I have champagne taste on a beer budget.
S

Thanks for having me. New shooter here. Got my MA LTC about a month ago. Looking for a mentor or ten to show me the ropes so I don't start off with bad habits. So if anyone is hitting up any ranges on the south shore let me know!! I currently have a Sig P226, S&W M&P 9c, and an FNX 45 Tactical.

Thanks again and look forward to learning and having fun!!

Welcome, Sean and Brannigan! We have every skill level and length-of-time shooter that you can think of here at NES.

So, grab a beer, pop corn, or what ever you like and immerse yourselves in the most entertaining and educational Gun Forum on the internet!

Chris here. I found NEShooters looking around for some licensing info I think; only just now joined now that I'm licensed to try and find some good spots to shoot nearby. Been shooting ever since I was a wee lad, and sometime last year begrudgingly agreed to move to MA from TX. Overall liking it here; luckily for me guns aren't my #1 hobby and my favorite type of shooting (sporting clays) doesn't require the fun ones, so losing the AR and the AK wasn't the worst thing ever. Hopefully I'll replace them some day though.
S

Hey everyone, I’ve been a lurker for a while now. Just signed up to see how it goes. Cheers

Just had 36 clips dropped on my doorstep yesterday... need to find a place to get some nice pings going

rikercd said:
Just had 36 clips dropped on my doorstep yesterday... need to find a place to get some nice pings going
Click to expand...

Nice! Load them all up and fill up a .30 CAL can, staggered...
Seven rows of five and one clip riding on your sling, 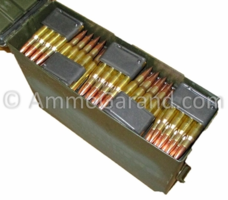 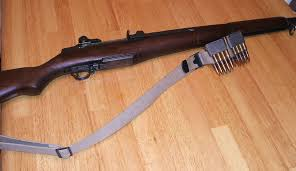 Greetings, I'm the epitome of procrastination. Always loved shooting, was a member of the Hanson R&GC back in the early 2000's... took my first safety class in 2003... never applied for anything... eventually moved to Lakeville... took another class in 2017... waited three more years... then finally applied for and got my LTC a few weeks ago. And seeing the prices of everything now... God I wish I had done this 18 years ago.

I have followed the red/green town list here for many years, so I guess it was good ol' Google that got me here.
N

Hey All,
A happy and Safe Veteran's Day to you all.

New here, about two days i think, Westborough, applied for my LTC( and my wife's) about 42 days ago or so. Still waiting, but all good. Have a good Wednesday everyone
S

Hi everyone.
I'm Steve and live in Oxford MA.
My wife and I have shot off and on over the years, and recently (2 years ago) got our LTC.
I'm currently shooting an XD9 Mod-2, and she has a S&W model 67 at the Massachusetts Firearms School.

Your input is welcome and needed here so, feel free to learn how the site works and always try to use the "Search" tab in the upper-right corner of any page. It will help you find an answer or
pose your question to get the best answers or advice on nearly any subject.

Also, if you would like to buy/sell/trade or get in on Group Buys and monthly "Give-Aways" from our invaluable Sponsors, you will need to become a paying "Green Member".
It is the best $21 bucks you will spend on anything firearms-related. NES Memberships

You can always sit back and enjoy the free and entertaining Posts here on NES too, but we'd love to have you "All-Aboard"!

New old man.
Leaned with a bolt action 22 in Boy Scouts.
Have too many to count.
I have many questions on things I have now. so please go lite on my stupid questions.

very glad to be here.

Slant6 said:
very glad to be here.
Click to expand...

Very glad to have you!
~Enbloc 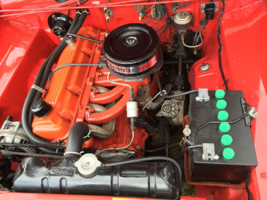 Thanks ,
My first car I bought.
Plymouth Scamp. 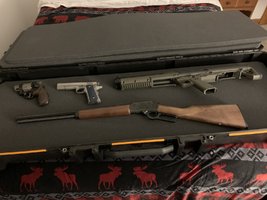 That has to be the most perfect and eclectic mish-mash of firearms one could ever hope to group in one, single photo.

enbloc said:
Very glad to have you!
~Enbloc

Ha ha, these are under appreciated and can made be screemers!

enbloc said:
That has to be the most perfect and eclectic mish-mash of firearms one could every hope to group in one, single photo.

Since I didn't see this thread until now, well, howdy.

Parker Schreiber is a pen name -- Schreiber is German for "pen." I'll make no effort to hide who am I otherwise. I'm here to learn about firearms, their use, training techniques, and options to use them. To say my shooting experience is limited is generous. Before this year, the last time I shot it was almost 40 years ago, and it was plinking with a 16-gauge shotgun. I recently purchased a TNW Survival Rifle, and once I feel competent with that I'll think about other firearms.

I'll occasionally chime in with an opinion, but I plan to stay out of political threads. Suffice it to say that I've been reading and occasionally participating in online debates about gun rights and regulation for more than 40 years, and in that time I don't think I've seen a single person change their mind as a result of one.

Thank you for your knowledge and for putting up with the occasional snark and off-topic excursion.

I have followed the forum for quite a while.
I have just joined.
I think you have found a good group!

Yeah I am new here.
I have been watching this site for years, and decided many here would be helpful.


I am a cranky old man with a great sense of humor!
When I post things that others find stupid, I am fine with that.

great to be here!!