Had this on layaway for a couple of months until I got the 37 up and running. This is my "last" rifle.....it finishes my WW2 collection save France, which I have no interest in getting. By "last" I may get a Krag some day down the road, but I'm in no hurry.

1922 ex-dragoon, rearsenaled to 91/30 standards, stamped matching, one line out on floor plate. ABSOLUTELY covered in cosmoline inside and out. "Recent" import with new serial number which I'll cover with cold blue. Don't have the strength to clean it now...will take several days. When I put it on layaway, I had them run a patch down the bore as it was filled with cosmo. Looked like the rifle took a 30 caliber crap afterwards. Near perfect bore. Have bayonet, sling, and tool kit. Debating whether on putting a Finn trigger spring on it, but I'll rarely shoot it.

This is an Izhevsk, right? 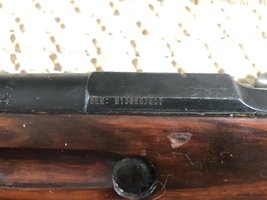 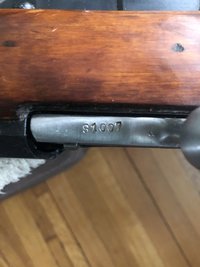 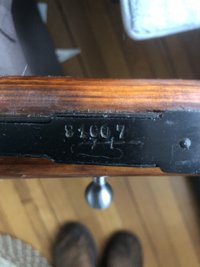 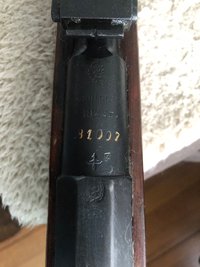 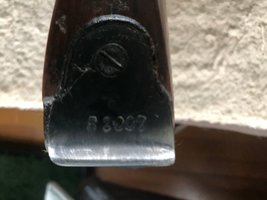 The original serial number is clearly visible in multiple locations...81007...why in the world would the importer be required to make up a whole new serial number for an obsolete bolt action rifle? "007"... must be a secret service rifle.
t

Of course, companies like Century aren't importing one rifle here, another rifle there, they're importing thousands of rifles in crates. So, importers just stamp and record new serial numbers for all guns, regardless of whether the original Soviet serial number would pass ATF muster.

Got a couple of boxes of ammo for it when I had it set aside. Never heard of it...looks new, made in mother Russia. Assume SPAM cans have skyrocketed in price. No ammo is available anyway...save at a 300% markup on GunBroker. My LGS had next to nothing on the shelves.
t 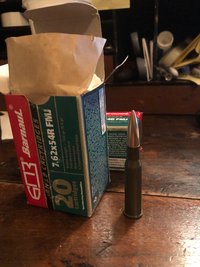 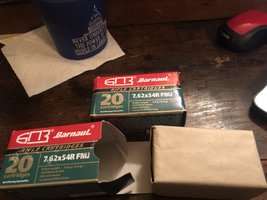 Really. More into handguns with my disabilities. M1 carbine gets the most action as it’s the lightest.
t

majspud said:
The original serial number is clearly visible in multiple locations...81007...why in the world would the importer be required to make up a whole new serial number for an obsolete bolt action rifle? "007"... must be a secret service rifle.
t
Click to expand...

Be thankful thats a older import stamp, the newer ones are F’n billboards.

majspud said:
Got a couple of boxes of ammo for it when I had it set aside. Never heard of it...looks new, made in mother Russia. Assume SPAM cans have skyrocketed in price. No ammo is available anyway...save at a 300% markup on GunBroker. My LGS had next to nothing on the shelves.
t
View attachment 454108View attachment 454109
Click to expand...

1943 Tula ex-sniper with rearsenaled '43 Krasnogorsk PU scope. All Russian base and mounts. PU came with attached mount from the arsenal. Tula Base is not far off in serial. Krasnos Scope tube constructed of siluminium (sp?) wartime expedient alloy. 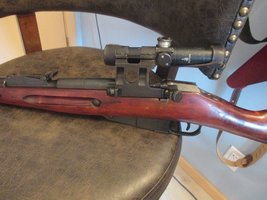 What’s the over-under on that?

I’d give you good odds.
t 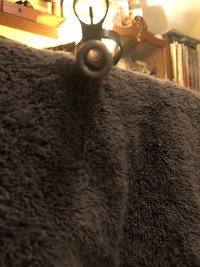 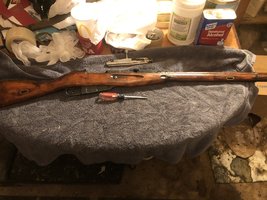 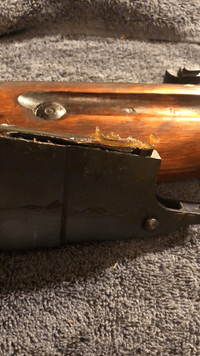 No, no....he's stickin to carbines and Karabiners now.

Someone remind me why I’m doing this.

Not as bad as I thought. Denatured alcohol literally washed it off. Little linseed oil on the stock. Save the bolt for tomorrow.
t 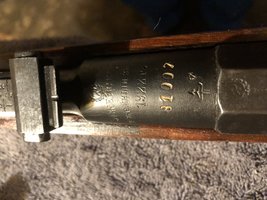 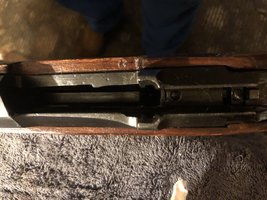 All set for tomorrow.
t 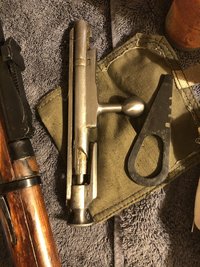 Use a sled or a lot of bags. I'm sure you know the kick.

I take out the M44 when I want to punish the guests and tattoo them with shoulder bruises.

Little worried....left shoulder is the one I had my long bicep tendon reattached to
t

Just drop it in boiling water. All the cosmolline melts off ans floats to the top of the pot. Then oil the hell out if it.

Thats how I de cosmo a whole rifle. Boiling water and a funnel to get the bore. Use extra large Rubbermaid bins filled wirh boiling water. The stuff melts and floats to the top. Then oil the hell out of everything. I can do a whole rifle in less than an hour.

For the wood stock I use a hair dryer and heat it up and wipe the stuff off as it melts. 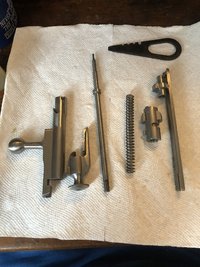 And done. Cycled fine - for a Mosin that is - "Clink" "Smack" "Clunk". Bayonet will need a little fitting.
t

Most rifles of the era had pretty long zeros so...probably.

Turns out the trigger has a a sort of a rough spot that acts exactly like a double stage trigger. Its the only Mosin I've held that I actually know when the trigger will break.
t
Last edited: Today at 6:15 PM
M

The 4 mosins I have owned all shot 10-12" high at 100 yards from point of aim. which is about right. Most battel rifles where zeroed for point blank range of a torso size target.

you want battle rifles zeroed in such a way that you want a hiot on torso size target from zero to 300 ish yards with out needing to fiddle with your sights. the 54r hitting 8-10" high can reach out a tad more than 300 yards.

Plus with some basic range finding skills with the front sight you can figure out if you need to hold on the waist line or the shoulders.

IIRC from what my dad said the 500 yard qualification was on your "battle zero" the target was 24" wide and 40" tall , pretty big silhouette.
Last edited: Today at 5:24 PM

That really shined up nicely.

I have a friend who had a bottom bicep tear repaired and it is stronger than it was before the tear. He is a life long weight lifter.

M
4 rifles I have never used the bore scope on

NES braintrust - help me with sling setup on a bolt action

Question about my first AR
2