I find (pre-panic) that CCI SV is the most consistent, reliable ammo at "commodity" prices. Last brick I bought was $29.99, a couple of years ago.

My favorite at the next price level, but still under most "match" ammo, is Norma Tac-22. Slightly better groups than CCI-SV, I use it for Rimfire Sporter matches. Since we're headed into the cold season, I'll also mention that its "greasy" lube is much better in cold temperatures than wax-lubed ammo (such as CCI and Eley) as it won't harden and prevent good chambering in the cold. I once had a terrible stage in RS shooting Eley that failed to fire on each of the ten shots due to hard lube. 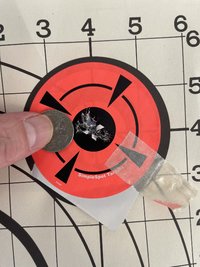 AWESOME
What ammo were you shooting ? 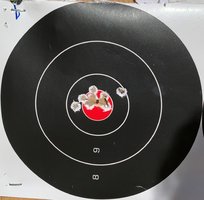 Pretty much moron proof setup. & I assure you, I’m a moron.

BarnBuilder said:
AWESOME
What ammo were you shooting ?
Click to expand...

This was SK rifle match
M

Pretty much moron proof setup. & I assure you, I’m a moron.
Click to expand...

You should be able to improve on that.
Good job and nice rifle

mac1911 said:
You should be able to improve on that.
Good job and nice rifle
Click to expand...

Always striving to do better.