This Remington Wingmaster 870 was bought for my Dad as a present from his parents when he graduated HS. Its a 1953 year model. In pretty good shape for a 62 year old. Last time it was fired would be @1980. Sat in the back of a closet since then. Passed onto me eventually after he and my mother both passed away. The big bonus was that as a kid I used to regularly clean/oil all the firearms even if we didn't shoot them. But the extent of my skills then were brushing the barrel and clean anything I could hit with a cloth or q-tip. So as I took this completely apart recently, I found that the insides were pretty nasty/dirty. But no rust. Once I really got into it I found some fairly rough machining to what I would have expected to be smooth parts.

So it really needed some TLC. Figured I bring it into the 21st century while I was at it. Ended up taking it into a tactical direction. After all said and done, only factory original parts I ended up with were the receiver, bolt assembly and action bar.

Fun build. Most likely could have had brand new for what the parts cost. But that's beside the point of giving the old bird a facelift. I shot this gun many times as a kid. And I maintained it for my Dad since I was @8 and taught by him how to clean/oil a firearm, but more importantly how to respect any firearm. And bought it a new Plano case too. You did a nice job but if it were me and my Dad's shotty I wouldn't have changed a thing. Just sentimental I guess.
N

So wrong. But to each his own

That crossed my mind the whole time too. But I'm not to sentimental about things. I have thought of the old guy every day since 2001 when he died. The old stock has a nice stress crack in it that runs parallel with the mounting bolt. It appears to still be solid even with the crack. Maybe just force some good wood clue into the check and clamp it for a few days, it could be strong as new again. It and the forearm would need a refinish too. So it is a candidate for a new "purty" stock and grip. Nice thing if I decide to make it appear more like it was when new in 1953, there is nothing done that cant be reversed.

No permanent mods made to it. Like the guy at one of my LGS said, some guns like the 870 or AR15 are just adult version of Lego blocks.

northny said:
So wrong. But to each his own
Click to expand...

Wait till ya see it with Curb Feelers and LED lighting....YowZa!!

I like the original Nothing like and old classic with patina metal and nice wood stock. To each his own.

northny said:
So wrong. But to each his own
Click to expand...

My opinion is a gun like that deserves to be configured in whichever way will get it the most time out of the closet and at the range. Plus all the wood is still there and can be put back on at any point if it needs to be put back to original look. Way to go on getting it out, treating it to some attention, and sharing.

Nice job. I am thinking about doing something similar to my old 870 woody. I do like the looks of that Magpul stock.

Individualist said:
Nice job. I am thinking about doing something similar to my old 870 woody. I do like the looks of that Magpul stock.
Click to expand...

Why the magpul? Aesthetics or to actually change length of pull?

Also just before you take the wood off clean it and see how it looks. When I bought my 60s 870 it looked dramatically better after cleaning the stock as there was decades of crud and skin cells/oil on there. My hands were actually getting dirty from touching the stock before it was cleaned! 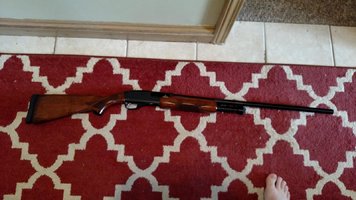 I like guns as they are.....BUT sitting in a closet sucks for such a gun that demands to be used!

As long as you use it in this version great. If it's just going to sit in the case.....why bother.
Looks good and it should be around for another 60 years.

If your ever feeling nostalgic you can put the old parts back on.
Last edited: Sep 18, 2016

Your rifle so mod the shit out of it.

I don't get the handle on the for-end.

je25ff said:
I don't get the handle on the for-end.
Click to expand...

I bought a Winchester from a guy at work and it has front and rear pistol grips. I was kind of turned off, but the price was right.

It's actually good for hip fire, but sucks when I unfold the stock

i shot my first clay targets with that back in 1976. my buddy from work owned the shotgun and we went to his club in the northshore, can't remember which one, after work. hand thrower, couple cases of clays and 100 rds each taking turns throwing after 10 shots. brought back sweet memories when i had more fun missing and life wasn't as serious. while your 870 is cool...i'd have left it alone also. enjoy though, looks like it will be fun to blast with.
Share:
Twitter Reddit Share Link