Firearm found at Restaurant in West Side

Saw this today in Westfield News. A Westfield man left a "automatic" pistol at a restaurant where he ate. I'm not sure of the full details, but I don’t know how someone could forget this. Mistakes can happen I guess. Hope the guy doesn’t get hung out to dry. I remember reading post on here about police officers leaving their duty guns in bathrooms.

By Carl E. Hartdegen on April 8, 2013in Police/Fire, Westfield
WESTFIELD – While it may be understandable for a customer to leave a hat, or even a wallet, when departing a restaurant, it harder to understand how a person could leave a pistol behind.
West Springfield police came to the city’s police station Friday morning to deliver a pistol that an Elizabeth Avenue resident left at a restaurant in their city.
Officer Michael Bradley reports that West Side police said that the man had eaten at a Riverdale Street restaurant and, after he left, the management discovered that he had left a .22 caliber automatic pistol in the booth where he had been seated.
The pistol was surrendered to city police who report that the owner’s license to carry a firearm will be reviewed.
Click to expand...

Semi-automatic has automatic in it.

Hopefully it was at least .22 WMR

.22 better than a sharp stick

Youradolt said:
.22 better than a sharp stick
Click to expand... 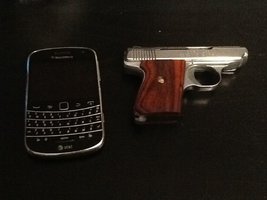 Maybe its supposed to be .32 ACP

Didn't have enough change to leave a tip?

Robert Blake was in Westfield? I didn't know he got married again?

Electric Eric said:
Robert Blake was in Westfield? I didn't know he got married again?
Click to expand...

this will not end well unfortunately if the guy is a good guy which is too bad, but part of being a gun owner is being accountable for your weapon at all times. Cops and soldiers have to have this reinforced because a lot (most) are not into guns.

Always have it on your person and this won't happen.....
O

Too bad he wasn't a cop-he would be receiving a promotion.

Value of buying AR15 Lower FTF in Mass vs. at an FFL
2

Officials investigating after one dead, another injured, in double shooting at Massachusetts Dollar Tree
2