STAND UP! HOOK UP STAND IN THE DOOR! 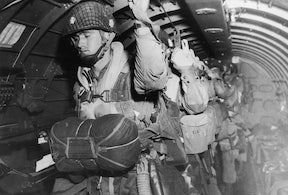 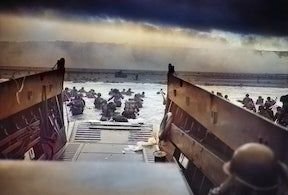 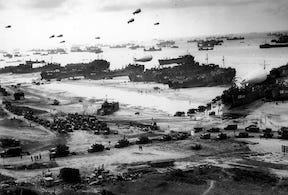 Nah, it was June 5-6, from the Airborne perspective. 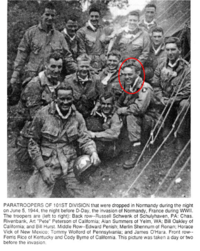 I was fortunate enough to find this account of my great uncle's death in a book being written about 101st actions at D-Day, and spoke with Mario Patruno in his home in Fla, few years ago, about a year before Mr Patuno's passing. In speaking with Mr Patruno I could see and feel the deep brotherhood between him and my great uncle and all the members of Fox Co, 101st. I share it as it seems to capture the realities of D-Day and how it affected those that participated.

Tommy Wolford and Mario Patruno were on a hedgerow facing west, when a French-made German tank of the 100th Pz Bn came straight toward their position. Wolford had a rifle with a grenade launcher and when the German tank fired its small main battery, the blast blew Wolford off the hedgerow and killed him. Mario fell backwards into a foxhole, lying on his back.

Soon thereafter, SS troopers overran the position as F Co. members fell back. A German was suddenly standing right above Mario's hole. Mario shot him in the head and he fell mortally-wounded, face-down, right on top of Mario, with blood running onto his face and into his mouth. Mario kept pushing-up on the German, trying to get his body off of him. The Germans had taken control of the area and were spraying bullets everywhere. Two German litter-bearing medics paused above Mario's hole and saw a German lying face-down, with his body moving up and down, as Mario was struggling to emerge from underneath.

When they lifted the wounded German off Mario, he pointed his weapon at them and sat on their stretcher. He laid down on it and motioned for them to take him to a hedge gap at the right (north) side of the field. This saved him from being killed or captured. They ran him over to a gap in the right hedgerow and he rolled off the stretcher and exited the field, heading to the right (east), in the general direction of the withdrawal.

The German's blood tasted salty in his mouth and Mario paused at a cattle watering pit, to wash the blood off his face. Falling back further, he encountered Bob Noody, who had a bazooka and who he saw fire at a German tank and miss with it. He also encounterd his Sgt, Russell Schwenk.

Later, when elements of G/41st AIR, 2nd Armored Division arrived, the Germans were withdrawing and Mario went back and examined Wolford's body with a 2nd AD soldier, who was a green replacement and who was seeing action for the first time. Wolford's body seemed to not have any marks or wounds on it and he was evidently killed by concussion from the tank round. When bullets started hitting the leaves of the hedgerow Mario yelled at the green 2nd AD armored infantryman to duck. The rookie soldier said "Whaat?" and bullets struck and killed him, as he had remained standing, oblivious to the danger. As intense as the above sounds, Mario's worst experience in Normandy came later, on a night outpost, where he was put one night for 2 hrs, 50 yards ahead of the MLR. After staring intently in the darkness at a bush, the bush suddenly looked like it had a German helmet atop it. With pounding heart ("so loud, I thought the kraut could HEAR it",) he crawled out with a length of leather rawhide, to strangle the German. He pounced on the dark object, only to discover it was just a bush. Quivering all over with nerves and adrenalin, he was a mess when the next trooper came out to relieve him. Mario had to see the medics, who gave him a shot of something, to calm him down. Later in the war, two men at a time were assigned to outpost duty. Mario still remembers this as the most intense experience he had in Normandy and ironically, there was actually no real enemy or killing involved. Yet the experience and all the physical and mental stress involved were very real. 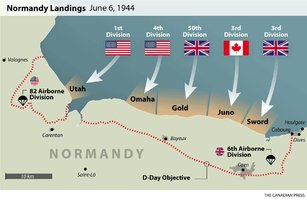 Spent some time in Normandy a few years back. It's a most humbling experience viewing what those poor bastards had to do. Walking on the sands of Omaha Beach and looking up to the fortified positions that weren't even knocked out by both Naval gunfire and bombing. To cap it off, walking through the many acres of graves, row upon row, is enough to bring you to your knees. May they all rest in peace. So many brave men to which we owe an unceasing debt of gratitude.

This map is very inaccurate. The 4th Division landed at Utah and the 1st and 29th Divisions landed at Omaha. The 101st Airborne also dropped behind Utah along with the 82nd.

Jeez it was amazing to me how many maps of 'D-Day' I found via google that were totally inaccurate. Here is one that is pretty close.

Nothing on Google front page to commemorate this.

CWulf said:
Jeez it was amazing to me how many maps of 'D-Day' I found via google that were totally inaccurate. Here is one that is pretty close.

The West Point atlases tend to get it right, and their visual style is distinctive. This map you've posted is derived from theirs. 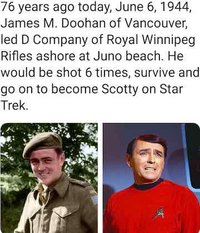 The 6 hits were from friendly fire. 4 in the legs, one took off a finger,
one to the chest and that was stopped by a silver cigarette case.

I had the pleasure to meet a gentleman who stormed Omaha Beach. He started by telling me he was a WW2 veteran and after some back in forth he opened up more about it after he saw my genuine interest in his stories. Just being in the presence of someone who went through something like that was powerful.

I also meet a women who was from Germany and was a nurse during WW2. She told me a little about it and how she left Germany. She said "I lived under Hitler and Obama is like Hitler". I laughed, this was during Obama's presidency. 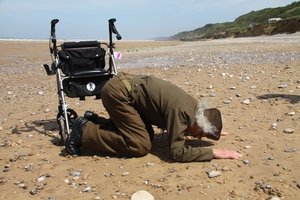 This is from photographer Doug Dunbar "I took this photo of Sgt Major Robert Blatnik 5 years ago. This was the stretch of Omaha beach in Normandy where he came ashore on #DDay. He commanded 901 men. Head count 24 hours later and about 500 yards inland, they had 387. 500 yards. Let that soak in.

That is a little more than a man a yard.

CBS Reports (1964): "D-Day Plus 20 Years - Eisenhower Returns to Normandy"
Stumbled on this watching something else on U-Tube... 90 Min's be excellent watching.
View: https://www.youtube.com/watch?v=vNaxTXfjfXk
You must log in or register to reply here.
Share:
Twitter Reddit Link
Top Bottom