Location
Haffa sack over the Border 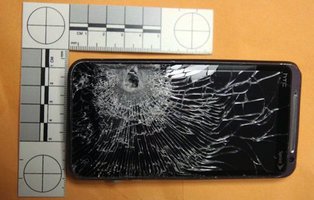 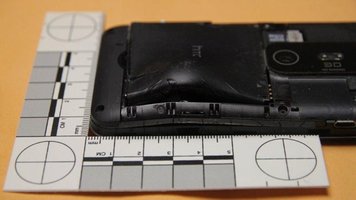 An attempted robbery of a central Florida gas station nearly ended in tragedy early Monday morning, but a clerk's well-placed cell phone saved his life.
At about 4:40 a.m. Monday, a man walked into a Hess station in Winter Garden, Florida, and asked one of the clerks for directions. When the clerk began to respond, the man pulled out a revolver and demanded that the clerk open the store's safe.
The clerk was unable to access the safe, so the gunman ordered a second clerk to try. That attempt was also unsuccessful.
"At that point in time the suspect went to leave the store, and as he was leaving he fired one round towards the clerk," Winter Garden Lt. Scott Allen told WFTV.
The bullet struck the clerk in the abdomen, not that he noticed.
"He didn't realize he'd been shot," Lt. Allen said, adding that he clerk's smart phone had stopped the bullet. The clerk didn't become aware of his luck until he took his phone out of his shirt pocket.
Click to expand...

Gawker is a shitty site but I had to share this story...


Like to see an iPhone take a bullet for its master

if i wasn't so sure the force would crack the glass anyway i'd wrap my iphone in a wallet i have which contains a IIA panel and then shoot it.

He got very lucky that it hit in the battery compartment area.
G

atilla said:
if i wasn't so sure the force would crack the glass anyway i'd wrap my iphone in a wallet i have which contains a IIA panel and then shoot it.
Click to expand...

Do it anyway it's an iPhone!

Gooman24 said:
Do it anyway it's an iPhone!
Click to expand...

pay for the replacement and i'm game.

We did that at the first car shoot.

The iPhone help up well.

I could show you but I threw it out due to the toxic innards being broken open.

Who needs body armor when you can take a bunch of old cellphones, duct tape em together and rock that under a hoodie.

Women Talk About How Guns Save Lives