Anyone own one of these, or any other straight pull bolt action?

An interesting design for sure and I can see where it would be a lot faster to cycle the bolt. 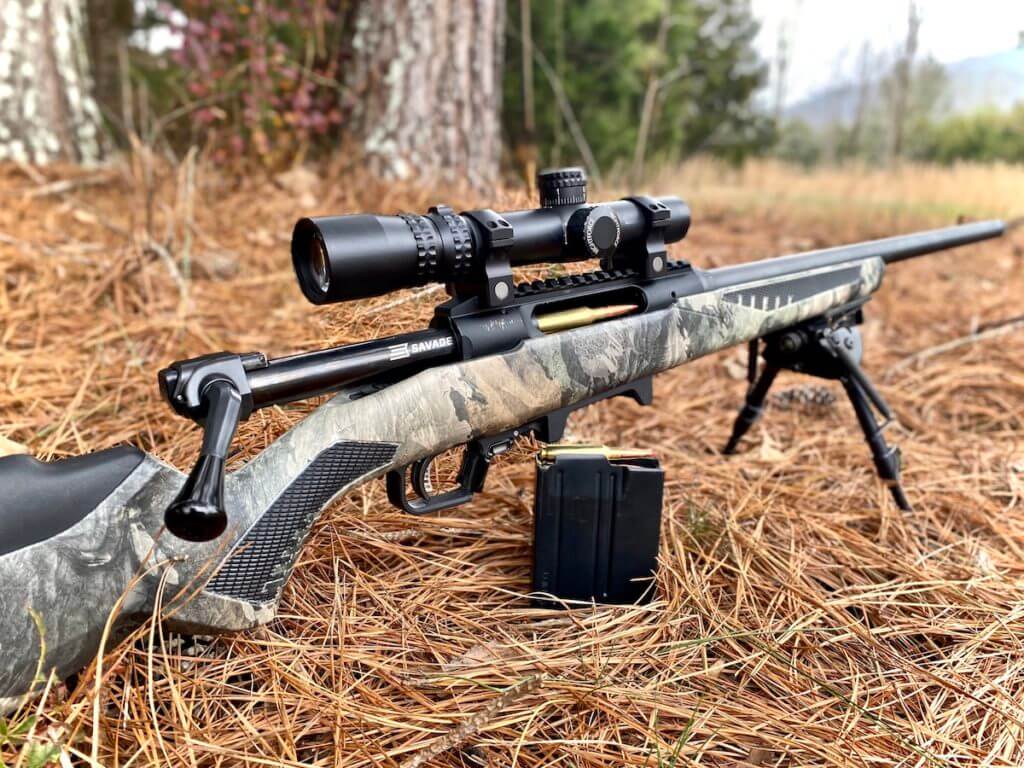 The new Savage Arms IMPULSE rifles are a whole new breed of rifle that raises the market to a new higher level. There have been European straight pull rifles for decades, but now there is an American made design at a much more affordable price point and loaded with additional features.

Simple and fast to operate, though not so simple to manufacture, the IMPULSE line has been in the works at Savage for 2 years. The new rifle features 13 new patents to develop and secure the design. It opens a whole new world for fast operating, accurate rifles. I hardly know where to start describing the IMPULSE.

For those of us accustomed to running standard bolt action rifles, it takes a little practice to break the habit of lifting the bolt handle to open the action and pushing down to close it. When operating the IMPULSE straight-pull action, pulling the bolt handle rearward causes it to cam backward unlocking the HEXLOCK locking ball-bearings. Continue pulling the bolt handle straight to the rear until it reaches full cycle, and then push it straight forward until it stops, locking up the HEXLOCK ball-bearings in their machined recesses in the barrel extension. 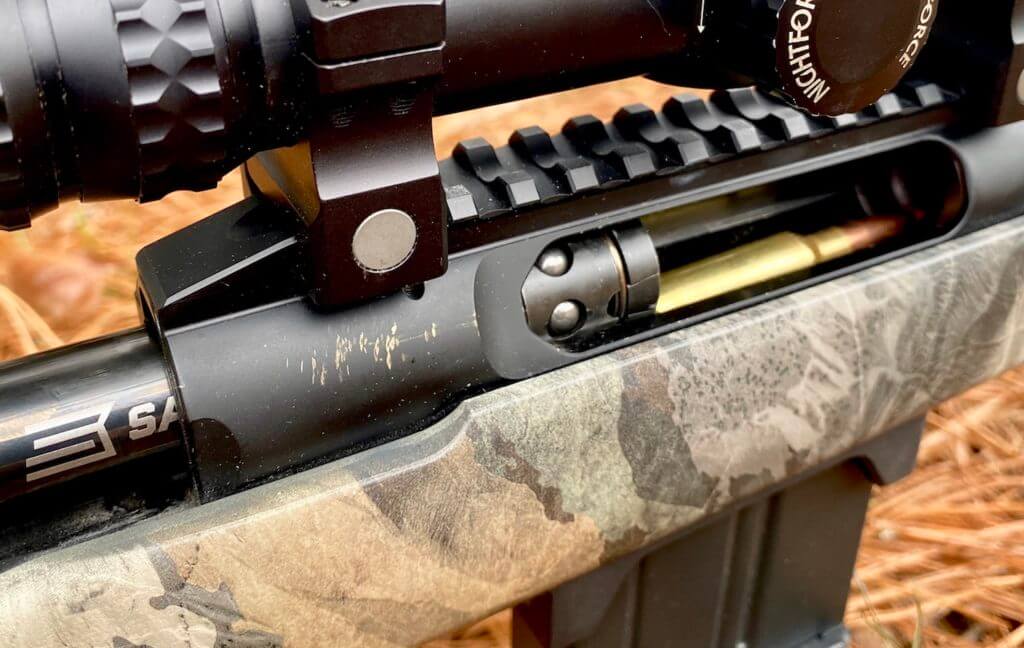 HEXLOCK locking ball-bearings clearly visible on floating bolt head of factory blueprinted action.
The HEXLOCK bolt utilizes 6 ball bearings that are forced outward radially from the bolt head into the barrel extension to lock the bolt in place when the bolt handle is pushed forward. As pressure increases when a cartridge is fired the pressure causes the bolt to lock up even tighter. The IMPULSE action is rated for standard and magnum cartridges.

Since the hardened steel bearings lock into a barrel extension attached to the barrel, the IMPULSE still has steel on steel lock-up for extreme strength. The action is actually made of aluminum to reduce weight and has a 20-moa scope base machined into the top. This eliminates one failure point of scope mounting; the base coming loose. This mitigates the additional cost of buying a base for your new rifle. 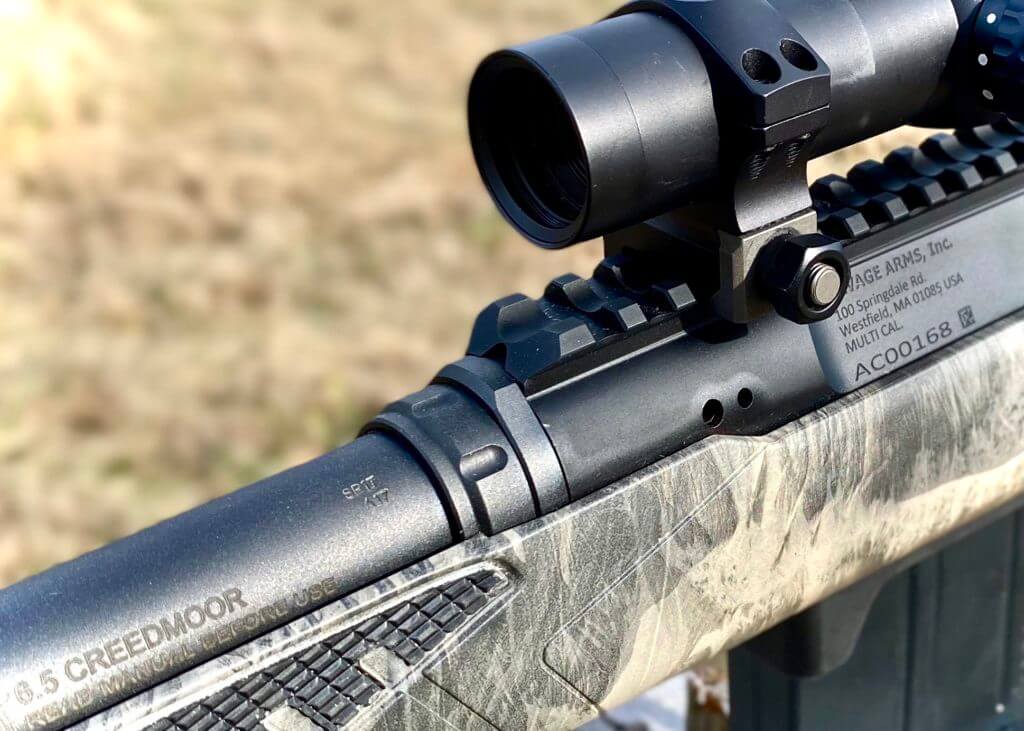 Integral 20-moa base and familiar Savage barrel nut on the free-floated barrel.
When the bolt handle is pushed forward into the closed position the bolt latches in that position so that it can’t be bumped open during handling. Pulling the trigger obviously releases the bolt to allow rearward cycling. There is also a quick-release button on the back of the bolt that can be pushed to release the bolt to cycle it rearward for ejecting unfired rounds or chamber checks. 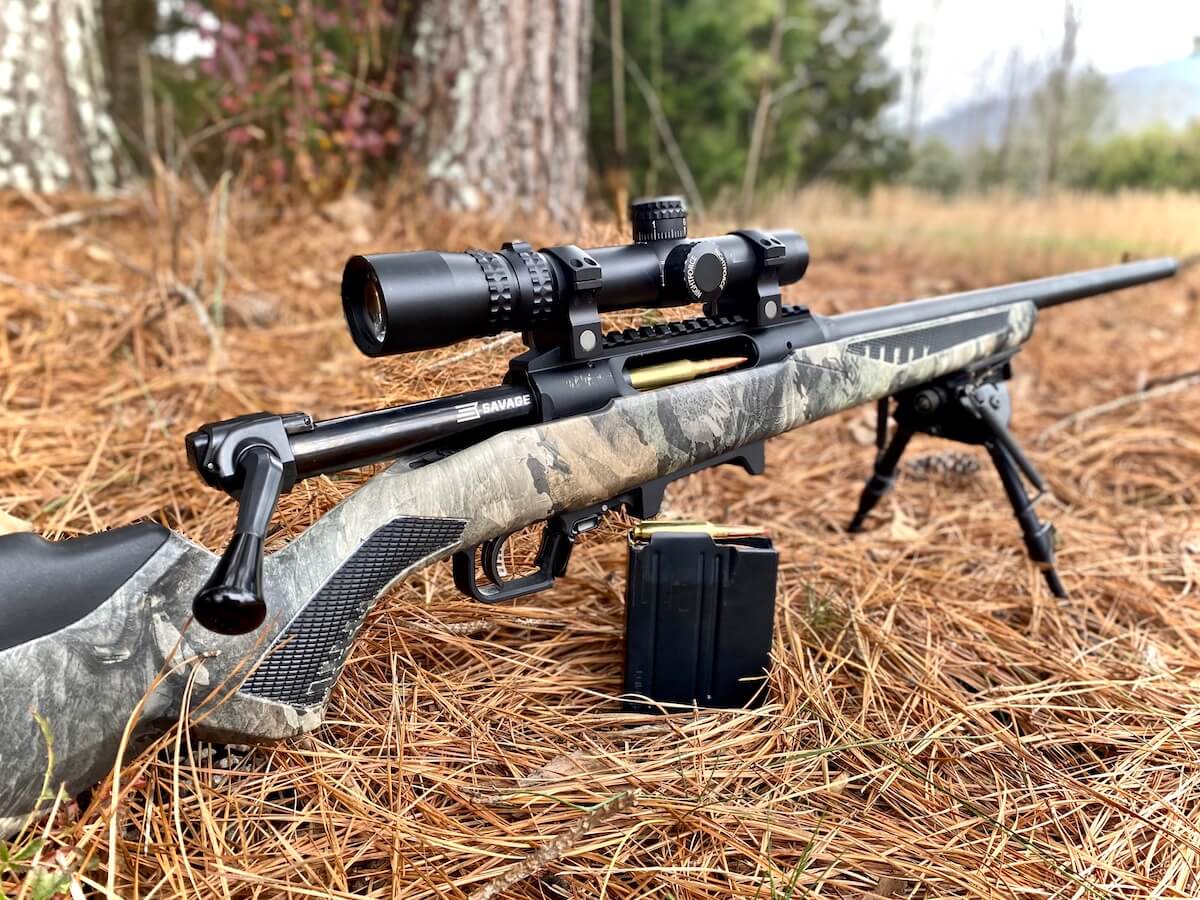 The new Savage Arms IMPULSE rifles are a whole new breed of rifle that raises the market to a new level. It’s really slick, very fast to operate, incredibly accurate; perhaps the most accurate rifle I have ever shot.

Are these even available in stores yet and at non rape prices?

I’m interested but don’t want to ruin my muscle memory with a 90 degree bolt lift.
D

These have just been announced and I don't think are released yet. The action is based on a Heym design. The only straight-pulls I've ever handled are K31s, which are pretty fat, unergonomic (for me) rifles.

Compooky said:
I’m interested but don’t want to ruin my muscle memory with a 90 degree bolt lift.
Click to expand...

Might find a market in the UK, New Zealand and Australia. Semiautomatic and pump action rifles and shotguns are subject to very restrictive licensing in those countries, which amounts to a de-facto ban for the average gun owner. Straight pull shotguns and rifles, along with lever actions, are about as close as they can legally get to rapid fire.
A

I have a straight pull .458 SOCOM built off of a side-charging AR receiver and the Lantac straight-pull bolt carrier group. I typically take it hunting in PA. Works just fine for me.

I would like to see a 22lr straight pull that can be easily switch from left to right pull.
Something like this but closer to $1000
Savage should be able to do it

Gross motor skills. That's the whole point of a larger bolt handle. Easier to hit with elbows or knees.

And you magnificent bastard for picking a video in my language.

And you magnificent bastard for picking a video in my language.
Click to expand...

You may have what it takes to master the gross motor skills reload.

I lust for one, a Predator model with the 10-rd mag and a long barrel in 6.5 CM. Just swap the handle and it's left-handed.
A

Yeah, mine's black and scary. Who even needs an AR to hunt, right?
T

mac1911 said:
I would like to see a 22lr straight pull that can be easily switch from left to right pull.
Something like this but closer to $1000
Savage should be able to do it

This is actually a legit good idea because while I like pump and lever .22's, I doubt they're as accurate as a bolt action, but a traditional bolt .22 is still a slow shooter and requires too much work. Give me a straight pull bolt action .22 and I'll definitely check one out.
H

Don't know. If this counts but I've a Browning T bolt 22 lr haven't had any problems operating it as opposed to my regular bolt rifles and it's left handed to boot.

i would see the same issue as with an AR if you have that design for a hunt at winter or swamp - you can get sand, dirt, a water than can freeze around those bearings... not sure why to deal with any of that over the usual bolt design where nothing pretty much can seize and get locked up, no matter what you did to it.

Obviously there is no personal experience with this particular model, but how much force is required to run the bolt??? All sorts of stuff has to happen on just a pull and push. Needs to lock and unlock the action. Needs to cock the firing pin. Eject and insert new carriages (probably the easiest function).

I've always ASSUMED that they are hard to pull and push. And if so, I'd like that bolt out a bit farther to get a better purchase on it.
B

The British Enfield rifles have a 10 round magazine and a slick, cock-on-closing, bolt action that enable a skilled user to deliver a high rate of accurate fire. Just use the same basic design but upgraded with modern lightweight materials and chambered for modern cartridges.

paul73 said:
a very first thing that came to my mind was a memory of a sling that was coming off my old rifle every time as those bearings got rusty and dirty and i was too lazy to replace it.
maybe i am wrong, but it just looks like an attempt to improve something that needs 0 improvement at all.
same crapus, no?
View attachment 462391
Click to expand...

Could be a similar mechanism. There are tons of uses in industry that use the idea.


BOOTKNIFEFAN said:
The British Enfield rifles have a 10 round magazine and a slick, cock-on-closing, bolt action that enable a skilled user to deliver a high rate of accurate fire. Just use the same basic design but upgraded with modern lightweight materials and chambered for modern cartridges.
Click to expand...

That's certainly a business decision a person could make. It looks like Savage wanted to make something new though. That's how technology progresses.
M