Been tossing around ideas of updating from my old crappy bench that was not in the best spot in the basement. The bench was too large to move into the other room and the bench was 30+ years old and in rough shape. Wanted something a little more updated and legit. Did not want to go crazy. Small, effective, and inexpensive.

Found the workbench at Lowes for under $200. Has alight, 3 drawers, power strip with USB outlets built in, upper storage compartment, pegboard, and fiberboard top.

Also took the opportunity to upgrade the basic RL550B Dillon press when I made a stop at Shooters Outpost in Hooksett, NH on my way up north to deliver a motorcycle for work. I had acquired this press from my gf's father for a very low sum of money with all the dies and toolheads. Added the strong arm mount, roller handle, bullet tray, and shell holder. He had it for quite some time and used to shoot competitively so this press has some miles on it but still performs flawlessly!

Also picked up a smaller 3" vise from Harbor Freight while I was getting a new 6" vise for my shop to throw on the bench. I want to double up bench use for some cleaning and other misc gun work. The vise was like $15 after I scored an employee price from a friend that works at the store.

Here is the new Setup 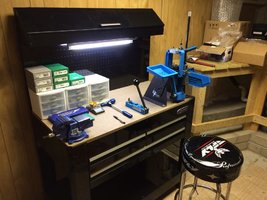 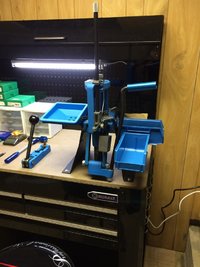 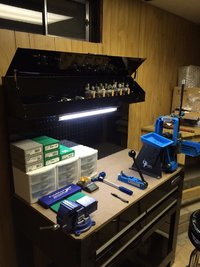 Here is a quick shot of the old setup 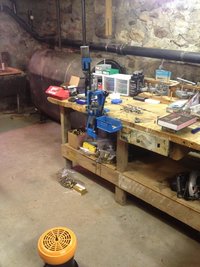 Just moved my shelving unit over with all my components and loaded ammo till I get a cabinet or safe moved down there. Coming together nicely. Just thought I would share this. Have had a hard time and have been going back and forth for months trying to figure out if I wanted to use my poor woodworking skills to "build" a bench. But I am a mechanic, the Lowe's bench was all metal and sleek and bolted together. Couldn't pass up the deal on it.

this is excellent idea. i love your bench.
even if not for reloading this is so space efficient. beats my bench
most excellent job!
M

I found a old solid door in the trash and used it to replace my fiberboard top on a similar bench.
The fiberboard does not hold up well...the through holes for your mounts will loosen.

Location
Not Where I Want To Be In Peoples Republic Of MA.

Yea my bench looks a lot more like your older bench, except I built mine 3 years ago.

I found a old solid door in the trash and used it to replace my fiberboard top on a similar bench.
The fiberboard does not hold up well...the through holes for your mounts will loosen.
Click to expand...

yes i will likely upgrade the top to butcher block or something nicer. the fiberboard will do for the moment. I need to figure out how I want to mount the vise and the dillon swager. want to try to make everything bolted on somewhat easier to remove. plan on picking up a tipton gun vise to work on some of my rifles and have a dedicated spot to clean.

I just needed to move into the better room in the basement with better heat,space, insulation, and outlets. Its also cleaner, the room before was the woodworking area which gets pretty dusty dirty and had to cover up my bench when someone needed to use a saw or something. plus the other bench wouldn't fit and I have been putting off "building" my own new bench for months. I am an experienced mechanic and fabricator, but give me a piece of wood and im pretty much lost. I just have a hard time grasping it and have no interest in adding another hobby or skill to my life as I already work pretty much 24/7 with my real job, volunteer/part time job, and side work. so this bench also saved me a bunch of aggrivation, time, and thinking. For under $200 it was well worth it in my mind. I went to harbor freight after for the vises i needed for my shop and for this bench, and they have a "similar" workbench but its not no light, no power strip, very basic and wobbly. this lowes one is MUCH better construction for the extra $. Harbor freight has a nice solid wood one (solid as in doesn't wobble as much as the steel work bench, prob made with some nice pine)

ill update with more pics probably as I modify and continue building the reloading/gun area. would like to move my safe down there eventually as well.
S

In regards to having equipment that is removable/maneuverable.......I have many tools that when combined, would take up all the real estate on my bench. I mount each of these tools to a standardized wood base that is the same size for all the tools (swager, trimmer, other presses ect) and as I need them I mount them to the bench for use. Each wood base is just a simple rectangular base, nothing fancy. All of them have the mounting holes in the same place so when I go to mount it to my bench, the mounting bolts line up and its a snap to switch out gear. When not in use I just store them on a shelf out of the way.
G

I have several benches from Home Depot, Lowes, and Sears. Although the Sears benches are the most expensive, they are also the strongest. I found it necessary to reinforce both the Lowes and Home Depot benches with angle iron, while the Sears benches needed no reinforcing.

The hard board has two functions--protects the MDF from fluids that would cause it to swell and can easily be swapped out if it gets too natsy. It also protects the work from damage from screw heads that hold the MDF panel to the frame.
M

I always wanted to mount something like this as my bench is very small 30" wide. Im constantly changing out equipment...not just for reloading.
My entire space for all my shit is small... and currently a friken mess. As I need to Rotate all my shit to get to the tools for the project of the moment.......lets just say I have been busy and lazy at the same time!

Your old bench, yep, looks like mine. I have a clutter problem for sure, can't believe the stuff accumulated from all these years. Nice set up you have now op, hope you enjoy it as much as I enjoy my gigantic, 12' reloading bench thats piled with "good junk."

Looks good, I like the light and top storage. Mine is a mess.

Maybe a new reality show? Reloading Room Makeovers a new bench, a safe and updated equipment. All I need now is a few sponsors.

Alright all just go clean it up and reorganize myself.

Nice setup. I recently bought the same bench, sent you a PM with a question on where to find the "plugs" you used to fill those silly holes.
S

EddieZoom said:
Nice setup. I recently bought the same bench, sent you a PM with a question on where to find the "plugs" you used to fill those silly holes.
Click to expand...

Eddie I did not get a PM from you it looks like? What holes are you talking about?

SVMRacer911 said:
Eddie I did not get a PM from you it looks like? What holes are you talking about?
Click to expand...

SVMRacer911 said:
Eddie I did not get a PM from you it looks like? What holes are you talking about?
Click to expand...

Not quite sure what happened there with the PM/Post but no worries. I was able to find some 3/4 plastic plugs at Lowes to take care of the holes in the top of the Harbor Freight bench. I had literally looked for these things everywhere. Thanks to the link you sent, I was able to point at a picture and that made all the difference.

<Edit>
Sorry, I got my posts criss-crossed. My post was meant for the other recent reloading bench discussion.
</Edit>
Last edited: Oct 18, 2014
H

Well since this topic popped up I might as well chine in.
Last year we had to move down to my 1st floor apartment due to my wife's disability. One room was wall to ceiling with boxes of everything t hat was upstairs. About a month ago finally got the room cleared out, had a new vinyl floor put in then started on my new reloading bench. Built from 2 x 12s for the frame 4x4s for legs 2 pieces of 3/4 plywood for the top. 12 feet long 2 feet wide and set up with an interchangeable set up by Pat Marlin I can have any of my equipment set to go in 5 min or less. Height is a little taller than planed but not a serious set back. Hope to test out the set up today by loading up some 45 acp and maybe some 45 auto rim.
Last edited: Oct 18, 2014
S 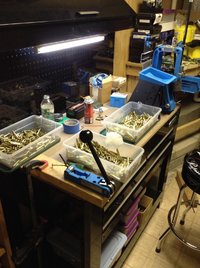 Found a nice way to mount the super swager, here I am depriming and resizing 5.56 brass then swaging it and will swap the tool head to prime, powder and seat the bullets.
R

I always wanted to mount something like this as my bench is very small 30" wide. Im constantly changing out equipment...not just for reloading.
My entire space for all my shit is small... and currently a friken mess. As I need to Rotate all my shit to get to the tools for the project of the moment.......lets just say I have been busy and lazy at the same time!
Click to expand...

I like his setup. But have you seen his videos? His press seams to move around quite a bit. It doesn't look very sturdy.