That would be depressing, as a mass resident seeing everything we can't buy.
C

I'll be set up there. I have 3 tables, Ammo, magazines, bayonets, books. No sales tax!
There is going to be a piece of legislation (crap more like it!!) debated on February 13, if passed, it will create 7 day waiting period for gun sales and AMMO sales, no private sales, all must go through FFL. If our Republican governor veto's it l

zboys said:
That would be depressing, as a mass resident seeing everything we can't buy.
Click to expand...

Other than "hand guns" FFL transfer most everything else is in play?

Headed over with my youngest son and brother in law Sunday morning. Always liked this show .

zboys said:
That would be depressing, as a mass resident seeing everything we can't buy.
Click to expand...

Not really I am from Mass and I am going tomorrow to buy what ever I see and want.

Well, I was going to this then I was doing the appleseed at Pelham. Appleseed cancelled so I will see you all there.
Last edited: Feb 9, 2019
F

Would like to but have to work all day both days.
D

No plans today, so I'll probably go this afternoon. Hopefully someone has some AA2200.

It's too quiet Anyone there? Any 9mm AR uppers?

The only ATM in the building is out of service, bring cash!!!!

This show is dying a slow death. Pros: Very fast getting in, hand they guy a $10 bill and you are in. No tickets or coupons. Line moved at nearly walking speed. Candy coated nuts instead of beef/cheese. Cons: Very few gun vendors. Lot of empty tables/space, $6 for parking. Disappointing
Last edited: Feb 10, 2019

Went this morning. Plenty of free parking on the street. One empty table, the rest were full. There was a mix of stuff, including some food vendors, a book vendor, memorabilia, and guns. Oh, and some state association and gun club tables, mostly with raffle tickets.

Found some used S&W 3rd Gen magazines at reasonable prices. If I had a 4006, there would have been plenty of pre ban magazines for me to grab.

One vendor I talked to said that the March show in Concord, although smaller, was likely to have more gun dealers.

Not a bad way to kill a couple of hours.

I ended up hitting the range. I’m very happy with my choice. 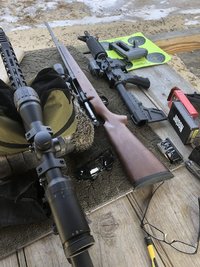 Small, good mix of vendors, could use more handgun vendors. $26 for two people is okay for close parking. Only real let down for me was size, and that had to do with 2.5hr drive

I didn't buy much but I liked it. It's not a huge venue but it was relatively full and pretty crowded. I just bought a few odds and ends like SKS stripper clips so I wouldn't walk out empty handed.

more importantly, what did you think of the hotel? I just renovated the lighting/electrical.

Sorry, I can't say I noticed even though I walked through a lot of it before hitting the ATM at the TD bank around the corner

I scored some pretty good reloading stuff today. Worth the trip for me.

I liked it . Brother in law found some .41 mag reloading stuff he was looking for . Son and I got some mags . Not a bad way to kill some time .

Got a nice fat 50 ammo can, barely used SigTach brace for short money and another sign to put on my fridge (facing the deck side door). 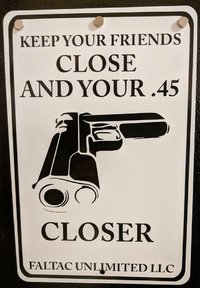 There was a guy there selling 40 round PMags for $20 each. So just over a buck more than in a local gun store. Yeah, pass. I'll get them when I want at one of the local stores and not pay a premium to get in the door. IF they had been the same price, or even $19 each (rounding up to make it easier), I would have grabbed one or to. If he was selling them for a couple of bucks less, then I really would have. He called out to me as I was at the next table and I had to tell him "not at that price". Then there was the guy selling unknown make barrels (for AR's).

There were more raffle tables trying to lure you in at this show than the last one I went to. Passed on all of them.

With the way things are going, for these shows, I'm not sure if I'll bother going to the next one. I mostly go to see if there's something I could use, but haven't seen at a local store (or found on either Brownell's or MidwayUSA). The SigTach brace (going to be used for my AR10 pistol build) was the highlight.

I did see the people from Chester Arms there showing off some nice guns. I'll have to be sure to swing into that shop (I'm close to them now) when I'm ready for another purchase. There was a revolver, or two, that caught my eye. I'd rather do that at the regular store than in the madhouse setting of the show. Especially since we were limited to noon time to get out of the parking spot (metered parking now, even on Saturday).
E

Scored some nice FAL mags for $20/pop. First time at the Manchester show, was decently impressed compared to the recent Marlboro show.
You must log in or register to reply here.
Share:
Twitter Reddit Link