several years ago i started tooling up to be able to cast, reload and shoot home cast bullets. I reconized early that the way prices and cost of living going up 10x faster than my pay I need the most cost effective ammo i can get.
Cast loads with pistol powders in rifles makes for some inexpensive shooting with accuracy being on par with jacketed ammo in my old milsurp rifles.

I have several garands to choose from. I will decide which one for testing tonight?

Im going to test the few batch thursday and it will be for a postal match. No idea how well these will do. Im a bit worried the alloy is a bit soft for the velocity which i think will be around 1750-1900fps ? The rifle that really boosted my CMP shooting not my first M1 but one of the better shooting ones in the early days of garanditis.
Its a high 5mil range with a 55 barrel. The bore is not that pretty but not bad as far as old war dogs go. Some are better some are worse. I will warn everyone though if you like how your bore looks and you think its nice
DO NOT BORE SCOPE IT. Video done with a $14 bore scope
Needs to be cleaned a bit better theres some copper fouling. This bore has some frosting, pits and some wear especially near the muzzle. This gun got me into the low 430s with HXP so it has potential. I have not "cleaned" this bore for a while maybe 600 rounds. I just CLP when I get home dry patch it CLP again and put up in the bunker. I dry patch it when I take it out again. Even with some stock fit issues. I will give it a good scrub and test out the cast loads

I will post a video of the after shots with cast and also the deep clean view later. No time for playing with videos right now
Last edited by a moderator: Nov 18, 2017

Looking forward to this, Mac! You're a Maverick!
M

You might want to look into powder coating your bullets. Easy enough to do basicly a shake and bake process and will keep your gas system from being clogged up with lead.

I shoot a gas checked powder coated 160 grain Lee bullet over 34 grains of H4895 with good results in my CMP Garand. I am at work and don't remember the exact Lee number but can add it later. This load shoots as good for me as any jacketed loads I've tried. The Lee mold is 309-160 and I use a tuft of Dacron fluff to keep the powder at the back of the case.
Last edited: Jul 27, 2017

highlander said:
You might want to look into powder coating your bullets. Easy enough to do basicly a shake and bake process and will keep your gas system from being clogged up with lead.
Click to expand...

mac1911 said:
...Moving on to the M1 i want to find a decent load that will hold the 10 ring of a SR1 and also function 100%...
...I will post a video of the after shots with cast and also the deep clean view later. No time for playing with videos right now
Click to expand...


How do those flat points cycle? I find that profile isn't always 100% as to smooth feeding into the chamber in my bolters. If speed isn't an issue, you can finesse them into the chamber okay and they shoot okay.
M

NavelOfficer said:
How do those flat points cycle? I find that profile isn't always 100% as to smooth feeding into the chamber in my bolters. If speed isn't an issue, you can finesse them into the chamber okay and they shoot okay.
Click to expand...

cycled 100% not a problem on function. I need to play with this rifle and see just how low it will function on powder charge. 37 grains is a known function in all my other M1s so i started there. accuracy is another issue.
I have a 185 grain lee 309" i might try also. The lyman 314299 did well accuracy wise in another M1 at first try. 4 moa at 200 yards for 24 shots but they where a low charge and hardly even moved the bolt. I will work at some more.
so far not so great with this powder charge and bullet.
The blak tape is my 1st 5 shots to get a rough zero then 10 shots for score....only 8 found the paper...ohh the fun

I scrubbed the bore clean and went to test .....I could not get the bore scope to work on work PC so no super clean bore shot....here it is after only 20 rounds...im thinking these bullets are not the right size and being pushed to fast ? owell need to start somewhere

Not that it's relevant, but I ended up using 27 grains of Lil' Gun under a 190gr GC bullet in my 8mm Hakim. Seemed to function fine and was fairly economical.Can't say I ever shot any rounds at 200 yards with it though.

I run the flat nose , actually a ranch dog mold ment for 30/30 cast with straight coww at around 1600fps out of my 1903a3 for cmp vintage and will hold the ten ring IF I do my job. Shooting from the rifle rest I'm right around 1.5moa with this bullet and the 03a3. Other than a wet patch before putting up and a dry patch before shooting I have not needed to clean it after 300 rounds now.
I will get there with the garand.
Last edited: Jul 28, 2017

Do your cast loads cycle the action?
M

Arto said:
Do your cast loads cycle the action?
Click to expand...

With authority leaving a nice pile around 3o'clock 6' away.

Arto said:
Impressive - waaay back when I tried CB's with Unique & the action only moved about 1/8" & left a dirty gas cyl & shavings
Click to expand...

I don't think there is a pistol powder that would cycle the M1 until you get into dangerous chamber pressure zone?

Im going to check out all my rifles again...been a while and I lost my data sheets in a broken pipe flood.
I will find the best op rod piston and gas cylinder combo and hope to get this rifle cycling in the low 30 grain area. With a good gas system and a "older" op rod spring I might get good function on as low as 32 grains?
Last edited: Jul 28, 2017

come on mac where's the paper patch? That should help clean up the bore too.
M

Michael J. Spangler said:
come on mac where's the paper patch? That should help clean up the bore too.
Click to expand...

Might dabble in patch'n in time.
Working on getting the bore clean again.
I think the last to rounds just liquefied and coated the bore.
M

I,spent the day getting the lead out and the barrel spotless , AGAIN. I will start over I forgot how frosted this bore was.
This M1 might get the 308 conversion sooner than later.

maybe on my most worn out , mostly correct M1 . paper patch will be the next project.

so a little up date

the bore scope is working again: think its the usb adapter.
the bore after another heavy cleaning. Not perfect has some pitting but most 60 year olds do


last pass with cleaner and brush

Back at it...
So I tried a few loads with the 165 grain flat nose. Its just not playing well with this rifle? to much of a jump to the lands. wrong size ? Who knows going back to the bullet that did ok last time.
So now I need to find a base line of full function and accuracy. I went through my rifle and the few parts I have. I selected the best I had in gas cylinder and op rod for the best fitting and hopefully efficient gas system allowing me to run some lower charges of H4895.
So up next is the 314299 COWW +2% Tin sized .310" gas checked and 2500 white label lube. COL is 3.280" even at 3.300" they still do not get into the lands so I run them just a little short to function in the clips and mags.
I will be running a cycling test soon starting with 30 grains and working up. I have one rifle that will almost cycle at 29 grains and the gas cylinder was used from that rifle as it specs out well.

As I move forward with the cast garand project.
I will also be doing as much as I can to improve accuracy of the rifle I'm dedicating to the cast project.
Just a few small things so far.
https://www.youtube.com/watch?v=n65268efS2o
Last edited by a moderator: Nov 18, 2017
M 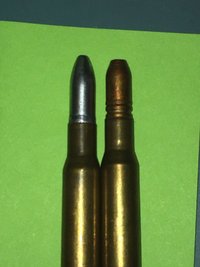 What kind of group did that 170 Lee hold?

I have more of the Lee 170s cast, no GC or coating, if you want me to send them to you?

I got a phone call today and my bullets are coming from Norm Purcella. One is a .30 coated gas check. I intended to load it for the 03 but now you have me thinking of trying it in the Garand. Are there any problems with shooting coated lead bullets in a gas operated rifle?

This cant be ok