Lawman 124gr 9mm...probably the best shooting 9mm round I've come across so far.

Grabbed a few 100 rounds of this stuff last week. Was pleasantly surprised, through my M&P 9C this stuff was consistently dead on out to about 50 feet (which is great for me) through my shield out to about 35 feet. No failures of any kind and has a great "feel" to it. I've been using Blazer and Aguila for a while now but this stuff just 'feels" better when shooting it.
I like the Lawman .45 acp as well....and it's American (even better) 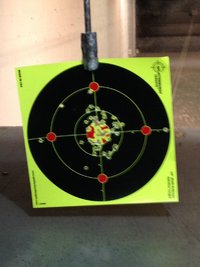 I also had a couple of boxes of the magtech 115gr 9 that FS has got. 5 FTE's with the first box through my shield.
Not much better through my 9C but a bit.

the 124gr ammo is most likely barely subsonic out of your 9c. absence of sonic crack can make pistol shooting easier, especially indoors. for this reason i usually keep some 147gr 9mm on hand for my wife. she is fine shooting 115gr stuff, but with the 147gr she is lights out. this isn't a function of accuracy (especially at just like 7-10 yards), but rather subsonic nature. yes at longer ranges the 147gr really does shine due to better sectional density, but at shorter distances such ballistics don't come into play.

for same reason some shooters (especially new ones) can shoot 45acp quite well. subsonic thus perceived as more pleasant and less disturbing to the autonomic nervous system. at first my mom loved shooting the G21. once i put a G17 into her hands she started flinching like crazy.
Last edited: Jan 9, 2017
Share:
Twitter Reddit Share Link
Top Bottom