A Western Australia dad who shared his passion for guns and ammunition with his two young children have been slammed by police as a 'disaster just waiting to happen'.

Daniel John Prunster, 25, pleaded guilty to a string of charges when he faced Geraldton Magistrate's Court on Tuesday, including failing to adequately store firearms, pointing a firearm at another person and possessing cannabis.

As part of the case, two controversial pictures were shown to the court.

One shows Prunster's baby son lying in his cot wrapped in a belt of ammunition, which the proud dad shared on Facebook in February, the West Australian reported.

'My nugget trying to be a Russian,' the post was reportedly captioned.

The court also heard about a horrifying image police found on Prunster's mobile phone dated April 2020 of him pointing a shotgun at his daughter, who was holding a rifle.

She was just 15-months-old at the time.

His lawyer Amy Bowlay told the court Prunster was showing the toddler the correct way to hold a firearm and had removed the bolts and ammunition before giving it to his daughter.

'The rule is to treat all firearms as dangerous and he has (not done this),' he told the court.

'The gun cabinet key was in the vehicle and ammunition was scattered around. It was a recipe for disaster just waiting to happen. His negligence could have resulted in a fatal accident.'

Police made the disturbing discoveries after 68 rounds of ammunition and 14g of cannabis were found in his partner's car.

Officers searched Prunster's Geraldton home where they discovered 10 rounds of .223 ammunition, a single shotgun round, and .223 rounds near a gun safe in a wardrobe, which did not have a separate compartment for ammunition required by law.

A closer inspection uncovered a belt containing 25 rounds of shotgun ammunition, a .22 and .223 magazine containing live ammunition and 40g of cannabis hidden under furniture.

Prunster remains out on bail and will be sentenced on April 19.

He also faces having his firearms license revoked by the court.

Ms Bowlay told the court her client was the sole provider for his young family and used his firearms for hunting and 'cultural reasons', as well as for controlling vermin.

She said Prunster acknowledged the ammunition and firearms weren't stored safely but argued it wasn't an ongoing habit.

Prunster recently acknowledged to friends and family online that he needed to change his ways.

'I needed a wake up call, I'm ready for a change in my life. The last couple of days have really been a challenge but I'm powering through. Thanks for the support from everyone much love, times are changing,' he posted on Facebook in March. 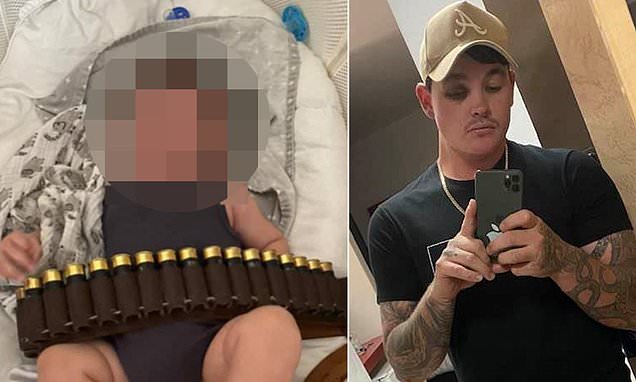 Daniel John Prunster, 25, pleaded guilty to a string of charges when he faced Geraldton Magistrate's Court, which heard about two disturbing photos.

I didn't know Australia allowed their subject to own firearms.
Everything was cool until the part when he was aiming the shotgun
at his kid.Now that make him a sick nut who shouldn't even own a
boomerang.

It’s one bandolier of shotgun shells. Who cares.

This 25 year old is not the brightest bulb in the box.

I thought the Aussies were all unarmed.
A

PATRON said:
I didn't know Australia allowed their subject to own firearms.
Everything was cool until the part when he was aiming the shotgun
at his kid.Now that make him a sick nut who shouldn't even own a
boomerang.
Click to expand...

Didn't see that picture in the article so I can't say if what they wrote is true about that. Did I just miss it?

And7 said:
Didn't see that picture in the article so I can't say if what they wrote is true about that. Did I just miss it?
Click to expand...

What? You think the media would lie to us!
N

did anyone else read it and think the "ammo belt" first mentioned was linked ammo for a belt fed?

I was like wtf I've got a picture of my kid holding a belt of .50bmg whats the big deal. The I see it was only a 12ga shotshell belt for bird hunting

Australians need to have more slam pigs in their lives, maybe they'd loosen up a bit.

Wonder what would happen if this was in Massachusetts?

PATRON said:
Everything was cool until the part when he was aiming the shotgun
at his kid.
Click to expand...

Lighten up, Francis. His lawyer swears he removed the bolt from the shotgun before he drew a bead on the tyke.

Yellow journalism at it's worst.

In Australia it is!!

Australia has those same problems. Those biker gangs in the original Mad Max movie weren't fictional, they were modeled on Australia's hyper violent biker gang culture which the authorities haven't managed to do jack shit about in 50+ years.

You know who loves Facebook more than Boomers who just forward anything they find to other Boomers, cops. Cops love Facebook, people make it so easy for them.

SHOCKNAWE said:
I thought the Aussies were all unarmed.
Click to expand...

Police: His weapon of choice

Police: Flasher Drops His Pants in Front of Children, Father Pulls a Gun