CrackPot said:
The 97B and 97BD are gone from all my distributors so whatever new old stock is out there is it for the gun. I found one more today and grabbed it which completed the zero inventory position for all my distributors. Maybe I hold on for a while and post them as "rare" and "with extras" in a few months. Isn't that the way to maximize price on NES classifieds?

You know what you’ve got.

drgrant said:
I always tell people if you love 1911s but you also dont simultaneously hate them you haven't fired them
enough.
Click to expand...

This is absolutely the truth. I ranked my .45s for shootability (for me with my tiny-dancer hands) in another thread. Didn’t include my 1911s since it was specific to non-1911 45s. If I include them it would look like this:

The CZ and the FNX are punished for being too big for my hands. I’m still surprised that the Springfield comes in right behind the HK, since it was pretty much half the cost of any other gun on the list.

cathouse01 said:
You know what you’ve got.
Click to expand...

CrackPot said:
Thank you. "rare", "comes with extras", "I know what I have". How could I leave that last one off...
Click to expand...

"low round count" is more credible but one of the two

Cz is funny though. They frequently discontinue a model and release it again with a new sku again soon thereafter. I do wonder if this is the case here?

Maybe this should be a discontinued mega thread. I just tried to buy a Ruger 77/17 to replace one I gave to my kid and I found out it’s discontinued. The 77 was a legit bolt action line.

JRT said:
Maybe this should be a discontinued mega thread. I just tried to buy a Ruger 77/17 to replace one I gave to my kid and I found out it’s discontinued. The 77 was a legit bolt action line.
Click to expand...

Yeah, the original owner put a Cajun trigger in mine. It's pretty sweet.

I'm glad I have big hands.

I was bummed to find out it was discontinued, I did give it to her with a Trashco scope though so I suppose it's not a total loss.

Location
The mountains of S.E Tenn

Sammy said:
I'm planning to pick up my own 97 this weekend. Got tired of "borrowing". question for ya: you went with Pro package instead of STandard and SA. Why? I figured SA would give you a better trigger, no?
Click to expand...

Adjustable sear and a few more pins.
Even if you don't use the set screw for it, it comes through mildly polished.
The replacement pin seemed to press in slightly easier on the original sear, so it was a matter of 2 or 3 swipes over the polishing stone and it was good to go.
With some flitz and a few stones and 1200 grit, I got the d.a. down to 9lbs and the s.a. down to 3.5 without the adjustable sear, and that was before breaking it in.

If you decide to do it yourself, read through this a few times. And definitely keep and eye on this little bastard , as it likes to jump out.
You can see where all the tension sits in this pic I took of when I did it. That one pin keeps everything in place. Slides through the frame and the cage. 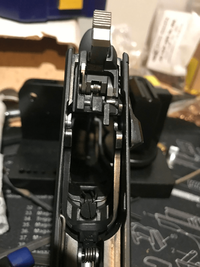 So being discontinued, can I get a deal on a 97B? And I’m in the market for one. Have cash will travel.

Half joking for laughs, but I want one.

I doubt you'll get a deal, assuming you can even find one.

I just got mine back today from CGW 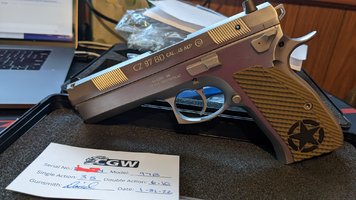 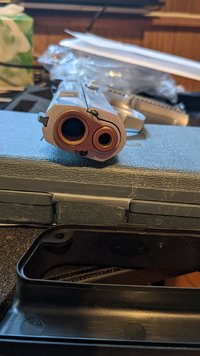 gerrycaruso said:
I doubt you'll get a deal, assuming you can even find one.
Click to expand...

There are metric tons of them on GunBroker right now.... at least 97B's.... It never was a hot seller to begin with.

ETA: im not implying its a bad gun, it's just the epitome of a gun without a well defined market. There really is no CZ97 archetype other than "I want a decent large 45 for no particular reason and this looks cool and is very well made so imma set cash on fire thx"

drgrant said:
Yes I have, actually, and some of them do surprisingly well if we're not talking shitty repro guns or whatever. Even a base level smith you will get lucky often and its great.

But if you want to have a standard, pick up a Magnum Research 1911. They make a midline gun that is pretty close in cost to a CZ97.

It will take a CZ97 to the cleaners out of the box at least in that one way.

Again though these guns are really two different ballgames. a CZ97 should be compared to its peers like a P220 or P227, etc, or a Ruger P series 45, and so
on.

I also strongly suspect that a CZ97 is going to run longer without a stoppage, vs a 1911 where if you look at the f***ing thing the wrong way it will probably
jam. I mean my 1911s are pretty reliable, but they all eventually will PUNISH you if you let them get dirty enough. On the other hand things like my G21, or G30, or
back when I had one.... a Sig P220, those were all guns that you had to try very hard to get to f*** up. Contrasted with the 1911 archaic swinging link controlled feed f***ing
nonsense garbage retard stuff going on inside those things. (I love 1911s but I also simultaneously think its a shitty f***ing design in that regard, but that shitty design partly contributes to the ergonomic wins you get on a 1911.... thats why "its complicated" ). I always tell people if you love 1911s but you also dont simultaneously hate them you haven't fired them
enough.
Click to expand...

I have both --MR Is a shooter and a great trigger. I have not tried the CZ. I am going to the range tomorrow.

Love me some hard chrome! Looks awesome! I’m probably going to pick up another SP-01 Shadow and send it to CGW for pro package and HC. Good to have a backup lol

I just looked up CZ97 on Gun Broker. There were 0. There were many 75s but no 97s. Maybe they're there but I suck at computer stuff.

gerrycaruso said:
I just looked up CZ97 on Gun Broker. There were 0. There were many 75s but no 97s. Maybe they're there but I suck at computer stuff.
Click to expand...

gerrycaruso said:
I just looked up CZ97 on Gun Broker. There were 0. There were many 75s but no 97s. Maybe they're there but I suck at computer stuff.
Click to expand...

If you search as one word, there's a front sight. Breaking it in two turns up more options.

Lmsoul said:
I have both --MR Is a shooter and a great trigger. I have not tried the CZ. I am going to the range tomorrow.
Click to expand...

I just got back from the indoor range!! Umm, 97 is more accurate than me, and I feel like in single action, it wants to shoot fast if I am making any sense, But dam, it is smooth shooting!! Compared to my MR and Ronin 1911. The CZ is heads above both from a trigger perspective. (single action).
S

A month ago, there was barely a dozen listings. I suspect dealers are taking advantage of the run-on model by collectors.

Sammy said:
A month ago, there was barely a dozen listings. I suspect dealers are taking advantage of the run-on model by collectors.

There are a lot of weird drop shipper type distributors probably just trying to unload them while the "attention" is being brought to it.
S

I own a 97B from 2002. I put a CGW package in it years ago. It is the easiest shooting, most fantastic gun I own, aside from the 9mm SP-01 I also put a CGW kit in to. I weigh 250 pounds and am am 5' 7". I am fat and slow. And I know that. But I regularly qualify with my 97B for my license. Guys doing my qual with me and shooting Glocks cannot believe my scores. One guy told me to slow down and I would do better but I had stuff to do and he was wasting my time.... But I was already 280/300. I also tricked out a Para 1911 with a Cylinder and Slide kit I got cheap. It's a great gun but the 97B is a killer compared to the 1911. Same trigger pull. 97B is the best .45ACP ever built. Period. It is heavy but you get the pull down to 3 pounds and you will want for nothing else. It's what that stupid Desert Eagle wants to be....

For those of you who just picked up a CZ 97B/BD, Greg Cote just got in some mags for them:

At $42 they are several bucks cheaper than anywhere else and the are in stock!