Met Brian last year at Fighting Pistol in PA. He is an adjunct instructor for Tactical Response. He has been time law enforcement for 20 years. He also has his own training company 3R Operations, Inc. I have never met a more polite and thoughtful person that uses the word f*** in pretty much every sentence. One student a female middle school health teacher,(who also happens to be a bad-ass motorcycle licensed instructor) who asked him to use the word MUFFIN instead… yeah, that did not work so well… It did make for some fun jokes throughout the two days…

Arrived an hour early and hung out with some other students from western Mass and shot the shit until the rest of the class showed up. We were chatting about other classes we have taken Some of them are instructors themselves have been up to SIG Academy multiple times, trained with John Farnum, Super Dave, FoF classes, as well as previous classes from Brian. I still think of myself as having the skills of a beginner and got anxious…Hoping I was not going to suck too badly. (the male ego is fragile) A few students were borrowing belts, holsters, and guns from Brain as we are getting set up and applying liberal amounts of sunblock and bug juice. Ticks are plentiful in the woods of NH. Brian introduced himself with a brief bio. He recommends training with as many different people as possible especially the older ones. We did our safety briefing & a thorough the medical briefing on what happens if there is a training accident. We had a doctor in the group and an EMT. Brains truck was backed into the bay with the hospital location programmed into his GPS.

We were told this is not a shooting class, it’s a fighting class. We would concentrate on getting off the line of attack (the X), clearing our garment, proper grip, the draw, focusing on the front sight and trigger reset. We practiced getting off the X as cleared our garments and yelling STOP! With a command voice. We learned that a simple tap and rack will fix pretty much all that goes wrong with the gun. I can hear Brian now in my head, “…what do you do if you get a click and not a bang? MOVE! TAP, RACK.. Get that f***ing gun running and back into the fight!”

We started live fire and my first shot had the BIGGEST flinch evah! OMG! What the MUFFIN? We were shooting DEA dot targets from 3 yards. I was a ½” low of that big f***ing dot 1. I thought to myself, get your f***ing shit right! Ben DeWalt crept into my brain and I got my shit together. That was the last dot I missed, thankfully! We added an assessment of our shots, if we missed the intended target, we were to make the missed shot(s) & a 361-degree scan with the pistol straight up looking for more people who needed to be shot. Top off the gun with a new mag, retrieve any mags on the ground with bullets left. All this is to be done with eyes on the threat. We were shown proper technique for not looking at the ground for mags or at your holster when re-holstering.

We were shown how to clear malfunctions. We practiced this each time with a scan & reload each time. We added dummy rounds to mags to be loaded every time for day one. Brian showed us that type 3 malfunctions can be fixed in the same basic way. Gun goes click instead of a bang, MOVE, Tap, Rack, & get another click. MOVE! Strip out mag. add fresh mag, tap, rack and get back into the fight! We switched out dot target to Humanoid Target. The top of the A section (heart) & in the brain were the only areas that were considered hits. “…Any misses of where you intended the bullet to go… AND YOU BECOME AN ACTIVE SHOOTER possibly…”

The first day I was shooting next to a small young woman named Denise (D-NICE). She ran a SIG 320 like a f***ing BOSS! I was so impressed with her skill and perfect technique every time. She looked like a standard Millennial, but she was a trained f***ing killer JOHN WICK style. So damn impressive.

We shot two-handed, strong hand, weak hand. We learned how to clear malfunctions with only one hand both strong hand and weak hand. As Brian would walk the line his attention to detail for perfect form & technique was OCD’ish. Nothing gets by that Mother_Muffin’er. He would always be saying remember why you are here, that bad guy wants to f***ING KILL YOU. You need to be hard to kill. He would give us around count to shoot into the heart & the brain, asses, scan, top off and re-holster. He would walk the line giving us polite correction where needed. All through the day Brain was keeping us in the mindset of someone is trying to kill us. We shot while moving forward and moving backward. Something Brian said has stuck with me. Good shooters know the shots they can make. Excellent shooters know the shots they can’t make. If we were too far from the target to make accurate deadly fire, Brian would ask us if we were confident that we could hit what we’re aiming at? If we start hitting innocent people now we are an active shooter...”

Final drill of the day was one person shooting while moving around obstacles. Performing reloads & clearing dummy rounds. I was corrected when I racked the slide off my rmr. “…Grab the back of the slide behind the ejection port with your full hand & pull it like you are going to rip it the f*** off...” On my scan, I was not able to answer the question Brian asked. I scanned again, I was unable to answer correctly again. On my 3rd scan, I answered the question correctly. A GREAT teaching moment. Day 1 ended we were all sunburned & tired. However, we all hydrated as we were always reminded throughout the day to drink a lot.

Day 2 started with a mindset lecture. When to shoot, what to do after you shoot. Getting an attorney now before you need one. Getting all your affairs in order now. I loved the lecture. Brain reiterated that people should train at Tactical Response. Its life changing. The three battles you must fight. The gun battle, the legal battle, and the emotional battle. You will not only learn how to survive these battles but win these battles. After the lecture, we headed to our range in the rain. We set up two large canopies and donned our raingear. It was pouring out and we were getting soaked to the core. I found out what I thought was a waterproof rain pullover was NOT. Once it got wet in sucked in the water. I was cold & put on a sweatshirt under my pullover. In 30 mins that was soaked. There were puddles in my sleeves, and I was miserable having a ball. We shot right up against the target in retention position and then we shot one-handed retention with the other hand protecting the back of our head. We would shoot rounds to the “junkulas region” Brain’s term. I called it rounds to the balls and then moved back and traded the shitty shots for well-aimed deadly fire into the heart and brain. As we moved back, we “zippered” the shots from the groin to the heart. Love the feeling of the gun shooting so close. f***ING AWESOME! We practice these 4-5 times to get everyone comfortable with the muzzle blast. I absolutely loved it.

Our final exercise was a long string of fire with everything we had learned in the two days. Each of us one by one would line up do a correct draw while moving off the X aim at the bad guy's heart and standby. He would say bad guy 1 has bugout scan. At some point, he would yell FIGHT! & we would have oriented ourselves to the threat, multiple shots to the heart as we are moving behind cover. He would say bad guy is down & another bad guy showed up we would shoot the steel from behind to cover multiple shots & move to a different elevation or side of cover. Standing, kneeling, supine. At some point, Brain would say cover is compromised move to additional cover. We would engage from supine & kneeling until that cover was compromised & move another cover and do the same. Once Brian would tell us that bad guy was down, we were to scan & top off. Then based on what we were taught at the lecture, Brian would have us make the 911 call (simulated, Brian as the operator). A great learning experience.

Brain mentioned that most important shot is after you do anything else, (first shot after a reload, after a tap, rack, after lunch, or first shot of the day). As others were going through the drill I was watching them miss the shot after the reload. When I was up I paused and concentrated on that first shot a little more after my reload. There were two red-dots in class, me and another dude and he had skills. He was the first person to go and the rain was coming down very hard. His red dot became unusable and he was missing the steel. I was thankful when I went the rain was not as hard and I still could use my red dot. After we all went through the drill the class was over. We debriefed, talked about something we learned, certificates and hugs were given, and we were done.

GREAT CLASS. SO GREAT I GAVE BRIAN CASH FOR THE SAME CLASS IN JULY. TOO MUCH FUN NOT TO DO IT AGAIN. James Yeager of Tactical Response says that “Brian A. Sayers is one of the guys that I recommend for you YANKEES!” 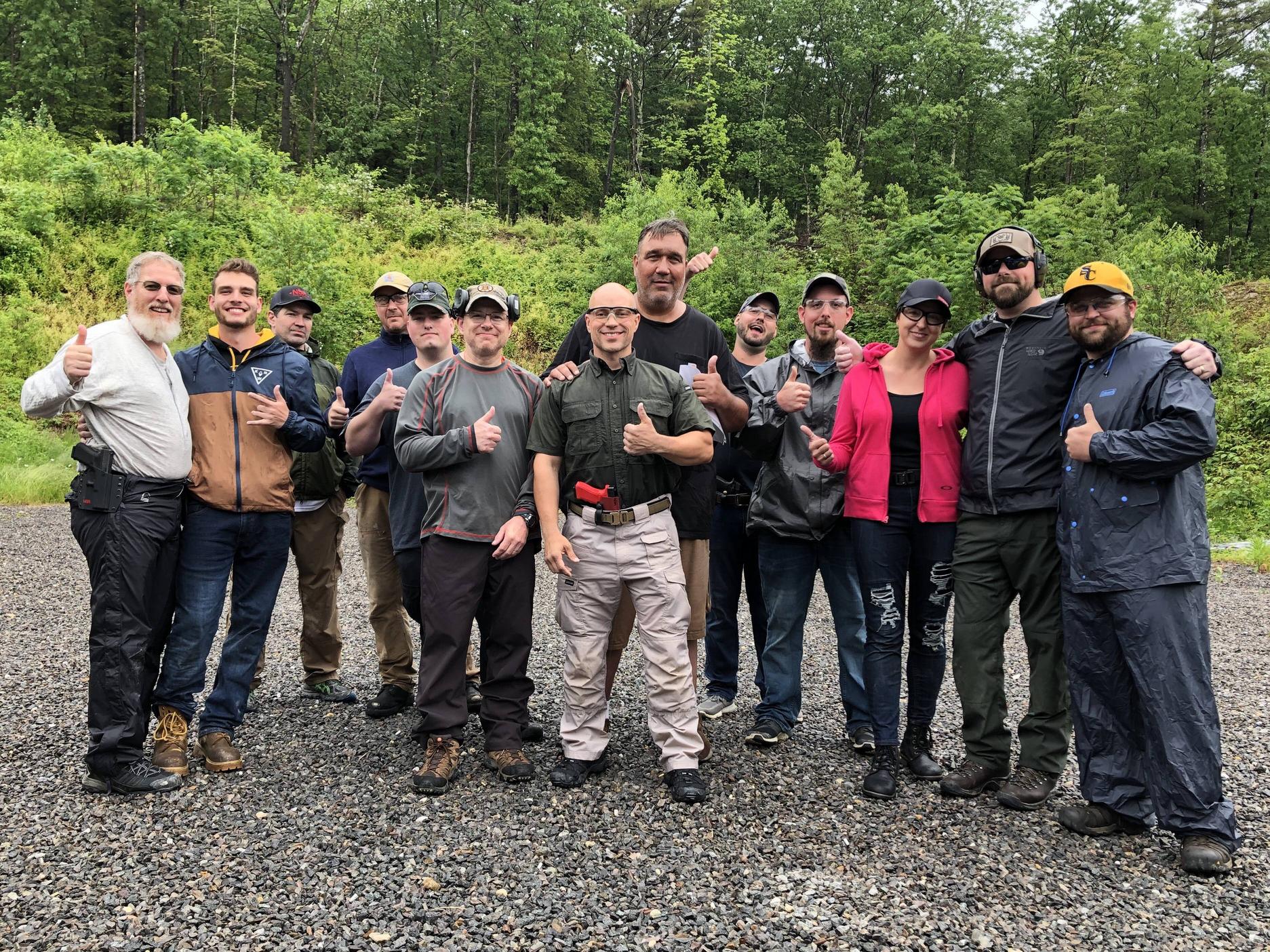 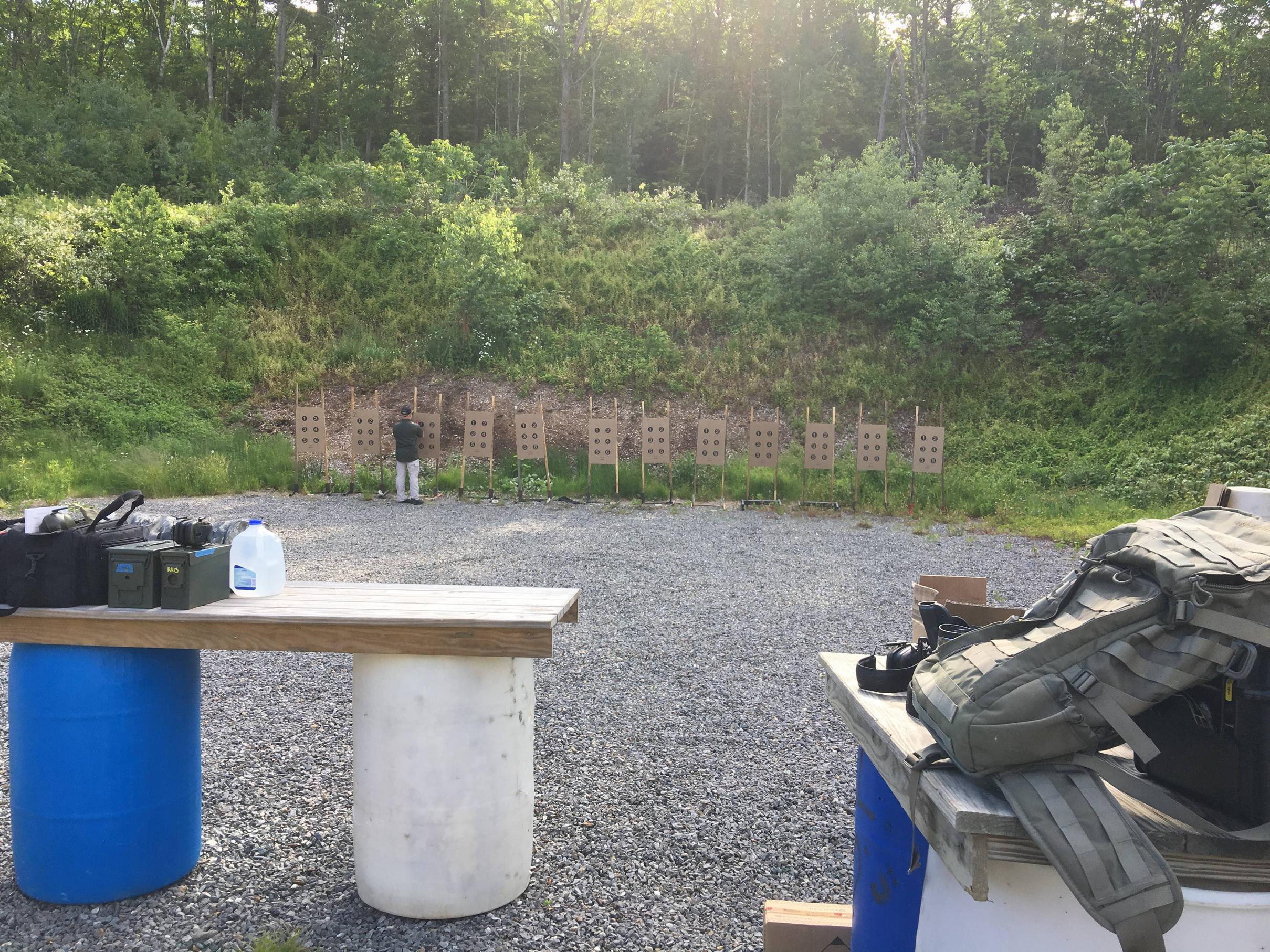 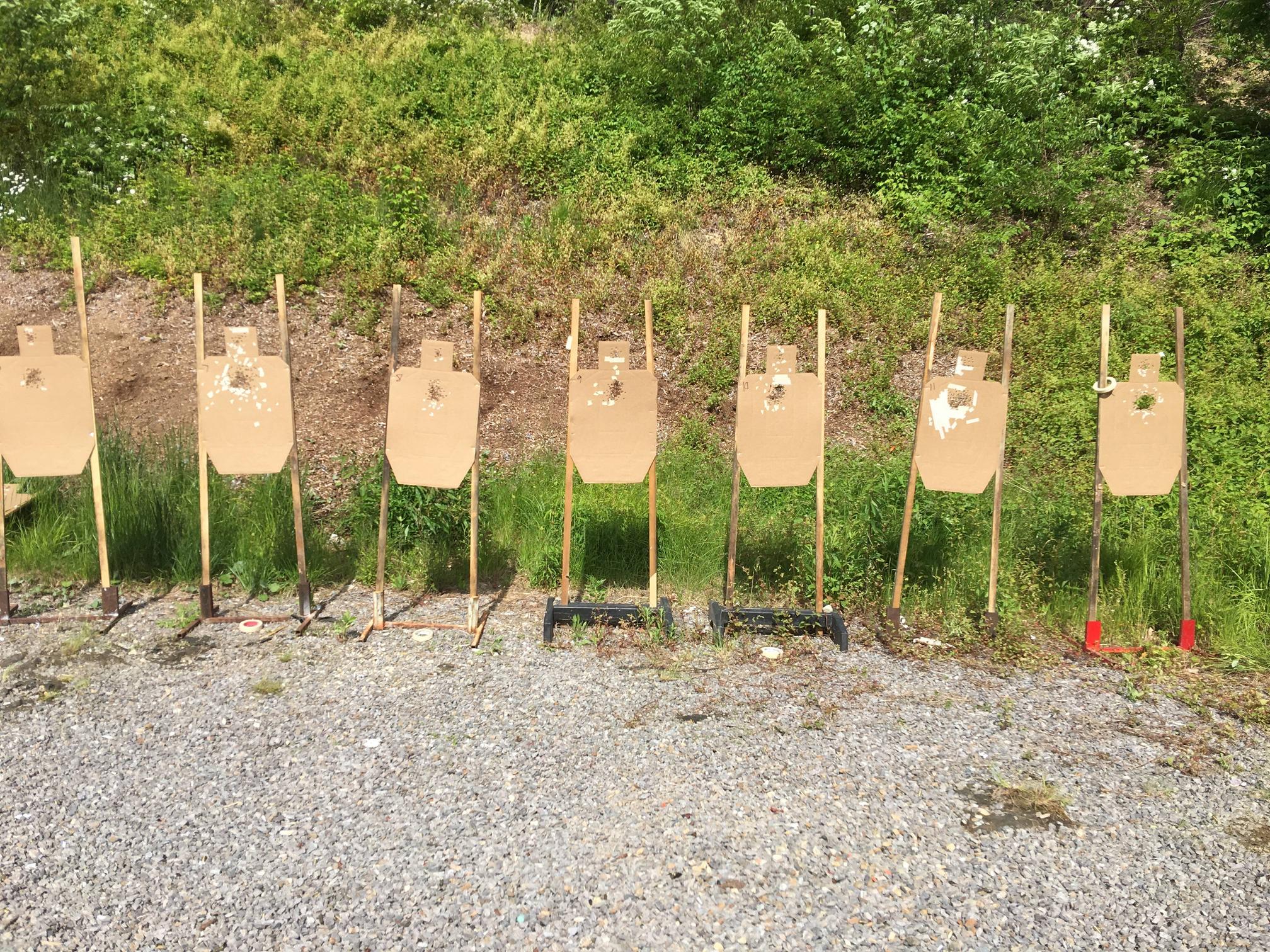 Another great review. This sounds like a great class to take.

Thank you kindly.
Absolutely take this class if you have the opportunity. At the end of the class, he offers a 100% money back if you did not think the material was worth it. No one took him up in his offer. I actually gave him cash at that moment for the next class in July.
Share:
Twitter Reddit Share Link