NOTE: This was an advanced class only open to prior students of 3R Operations Everyday Pistol and without the context of being in the class under the watchful eye of a competent instructor many of the drills and concepts were left out intentionally. There was a lot more in the class than in this AAR. Safety was always number one. Brian’s attention for us not breaking any of the safety rules at any time during the two-day class was impressive, at an OCD level of detail. Drills were explained multiple times to the group, demonstrated by Brian, and gone over a few times to each of us individually as we ran the drill.

We started off with a medical briefing, We had our safety briefing, really stressing the safety rules as we would be drawing our guns in a confined space with other students sometimes in front of us and to the left and right of us in the car. GO SLOW AND THINK ABOUT WHERE YOUR MUZZLE IS AT ALL TIMES.

Introductions were made and kept short as we all knew each other from previous classes with Brain. One of the more impressive things about Brain’s classes is that he has an extremely high customer retention rate. I would say over 90% of his students come back at for at least one additional class of his, and over 80% come back for multiple additional classes. That says a lot about his classes. Brian went over the course objectives and how the class was going to flow. We were going to start off slow and build the skills eventually getting too complex drills. All the drills were optional and if anyone decided not to do a drill it was no big deal, no one was to an eye roll or make a dumb ass comment about someone opting out[/b][/u]. Everyone did every drill in the two days.

We had a lecture on how setup our vehicle (based on Brain’s 21+ years of law enforcement) how to position mirrors so you can see all the way around your vehicle, structural details of your car, and how collisions affect the body. Where to place and NOT to place your hands on the steering wheel. How and what the airbags will do when they get deployed. Where exactly to position the driver’s seat. The proper distance you should keep between you and other cars, how to drive away from danger correctly. When your life is in danger there are certain things you can do with your car to get off the X, Brian goes over them in detail. Going to guns should be the third option when you are in your car to save a life. This class will go over in detail how to use that third option effectively and safely.

We learned how to correctly unbuckle our seatbelts with two hands in case under the stress one hand misses the button, where and how our left hand is positioned behind the belt to ensure we are not tangled in the belt as we exit the vehicle. How to correctly open the car do with two hands and keep it from bouncing back at you.

The most important shot is the first one, our first shot of the day was to the heart of the bad guy from about five yards. We lined up and each of us walked up correctly drew our pistols as we got off the X, delivered a clean heart shot, and moved off to the side to finish the Wyatt Protocol (Fight, Asses, Scan & Top-off). We all had good shot placement and Brian told us we needed to shoot like that for the balance of the class.

Our first drill with the vehicle was with the door open we were to press the gas pedal simulating us trying to drive away, saying the words “vehicle down, bail-out”, unbuckle our seatbelt correctly, get out, draw our pistol, fire at a steel target, walk backward firing until we see the cover in our peripheral vision, move behind and utilize cover correctly, shoot the steel target until a cease-fire was called. We were to finish our Wyatt Protocol off to the side.

We built up tasks and skills on each drill doing the same type of drill, first door open drawing our pistol outside the vehicle, door closed opening the door correctly, drawing our pistol inside the vehicle, opening the door one-handed. We added a shooting passenger and did some drills communicating and working as a team to exit correctly while moving to cover while shooting the bad guy.

We were taught that we all do not go into the car at once. One of us stays out and looks around for danger until the car is ready to roll and then he/she gets in at the last second. Most attacks happen when you are getting into or out of the vehicle. Have a lookout during those times if possible.

We did drills pulling a child’s car seat out under fire, securing the child behind cover shielding it with our bodies, and shooting bad guy targets. You noticed the students that had children, they handled the baby's car seat more carefully than the students without children. HA!

The theme of the class was the vehicle is a bullet magnet and its terrible cover for the most part. Get out and go to cover as soon as you can while firing accurate shots into the bad guy, you are responsible for every bullet that leaves your gun. Do not be the active shooter!

Brian sat in the passenger seat and taught us how to safely pin an innocent passenger (himself) to the seat while pushing the muzzle of the pistol past him and shoot out his window at a bad-guy target. I felt bad for him, all twelve of his students pinned him hard into the seat as we pushed past him to keep him in a safe place while we shot through his window.

We had a block of medical training, how, when, and where to use tourniquets. We were shown a few different types of TQs and how to put them on yourself. CAT, TK4 & RATS, we were shown how to pack the wound with gauze and add a compression bandage. We did some drills where we simulated the driver weak arm was “down” we had to get our pistol out one-handed carefully and correctly from the driver’s seat, shoot through the windshield until slide lock, the passenger had both arms working and they would shoot a few times through the windshield, the passenger would get out and move to cover and continue to provide covering fire into the bad-guy steel target while the driver had to get themselves out of the car get behind cover, apply a TQ correctly, pack the wound and apply a compression bandage on themselves, reload the pistol one-handed and get back into the fight while utilizing cover and having the TQ and compression bandage tight on your weak arm. That was an interesting set of drills.

We learned the best cover available on a vehicle was behind the wheels/axil shooting in the fetal position around the end of the vehicle. Brian set up a target with “ankles” to shoot at and if you hit the “ankle” the cardboard target would fall over and expose the heart. Shoot him in the heart a few times! That was cool.

We did some drills where we would have non-shooters in the passenger’s seat, we would have to engage bad guys to calm the non-shooter down, get them out of the vehicle and to safety while they are freaking out and not being very helpful.


Brian gave us a talk about the “truck gun”. His argument was that if you were taking fire you would fight with what you had inside the car. Most of the time it will be your pistol. If you ran with a long gun upfront with you everyday ROCK ON! But never leave a gun in a car unlocked. We do not arm criminals! The idea of getting your long gun out from the trunk under incoming fire does not seem realistic. You need to get your ass away from that car as fast as you can. Bullets will be slicing through the car. NOT A PLACE TO BE if you are taking fire. That made a lot of sense to me, I did not bring a long gun to class. I do not roll with one in my car and I would be fighting with my edc.

We did an interesting drill where a cardboard target was placed in the driver’s seat and the passenger’s seat. We were to walk to the car and shoot the driver multiple times in the heart through the windshield. One by one we did this drill, we examined both targets and I was surprised to see all hits were in the bad-guy target and just two very small pieces of glass were in the innocent’s target. If we had to shoot a bad guy, we could do with confidence that a bullet would not fly off into an innocent in the passenger seat.

Brian is so confident in his material and his instruction that at the end of the class he offers you your money back if you did not think you got what you paid for it. EASY DECISION! Brian is a great instructor. He tells you a few times what he wants, he shows you how he wants it done and tells you again what he wants… I like that.
##


No website by choice. Email or call Brian for an invitation to a class. You will not regret it. Full money-back guarantee. 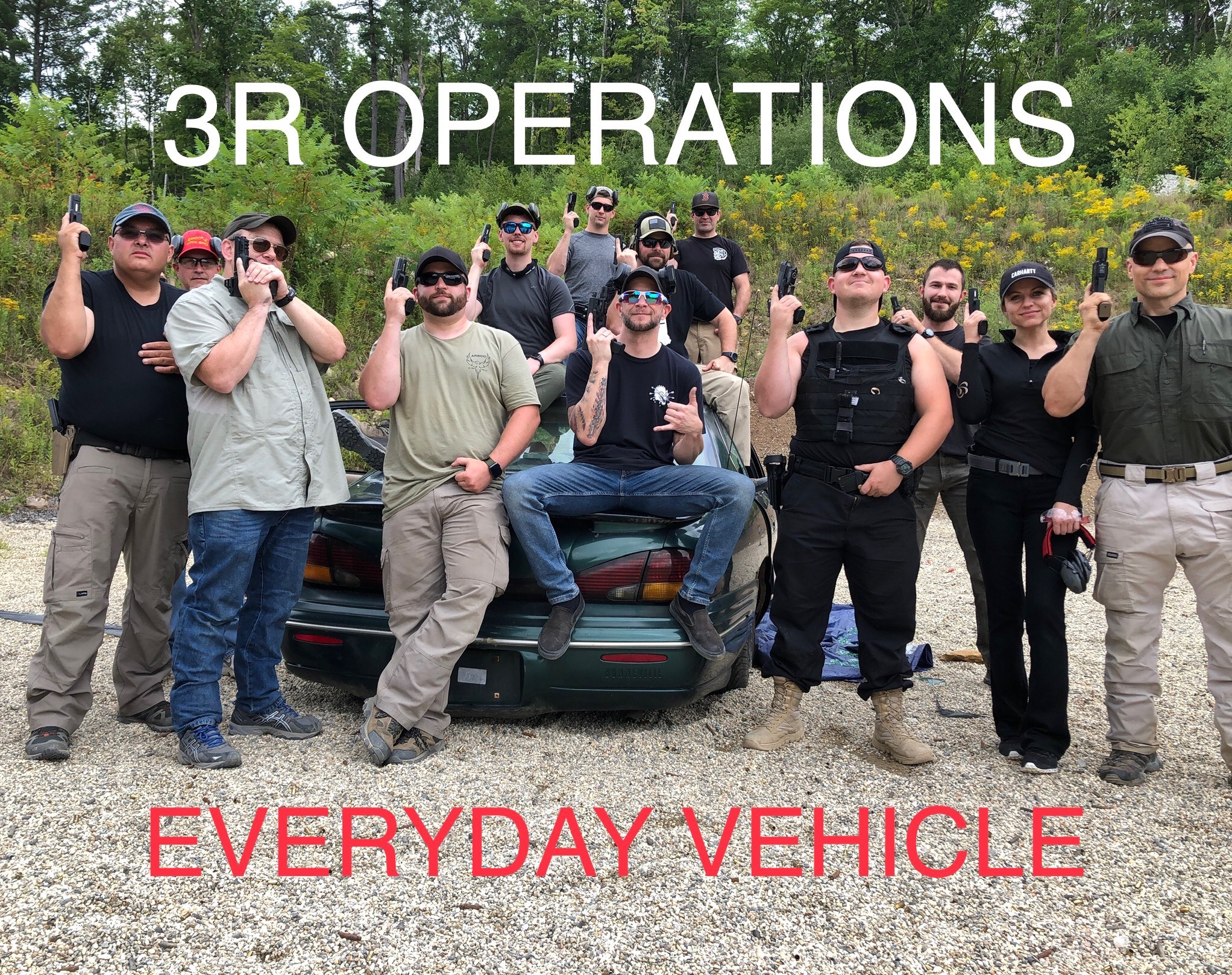