Anyone have primers explode on XL650?

I've read stories of the entire stack of primers exploding on the XL650. Today I was loading 45ACP and even though I sort the brass somehow a damn small primer case snuck its way in. The primer exploded, I wasn't even pushing that hard. It was loud and scared the crap out of me but luckily only that one primer went off. My question is, what causes the entire stack to go off? Did I get lucky or is there something else that causes this problem. I would like to avoid this if at all possible.

It’s called sympathetic detonation. The whole stack usually goes because the primers are either touching one another or are so close as to let the detonation shock wave initiate the explosive compound in the other primers. In the case where you were pushing the primer into a case, it was far enough away and shielded from the other primers......

I've read a few accounts of this happening, usually a result of forcing a primer. (So they say...) I took a big piece of 3/4" plywood and screwed it to the joists overtop of my XL650.
I have had a very few SPP's turn sideways in loaded rounds. Found these while gauging my finished rounds. Can't say I felt it when it happened.

It has happened to me. It blew that plastic rod up through the florescent light and scared the shit out of me. Dillon said to throw the whole priming system away and sent me a new one. It was my own fault for trying to see how fast I could go. I loaded 1200 rounds of 9mm in 1 hour. It was a very dumb thing to do . I don't recommend it.

I had one pop on me on my 650 (same issue, small primer .45acp case while running large primer cases) and it was a solo pop and not a sympathetic detonation taking out the entire priming tube.
P

WanMan99 said:
I had one pop on me on my 650 (same issue, small primer .45acp case while running large primer cases) and it was a solo pop and not a sympathetic detonation taking out the entire priming tube.
Click to expand...

I have a 650 and reload 45. Wanting to avoid a problem, I have found a very effective and fast method to sort 45 cases for large and small primer pockets. Dump your unsorted cases into a plastic pan or box. Using a plastic 50 piece bullet holder for 45ACP; these are the plastic frames new ammo comes in, scoop cases into the plastic holder shake it to speed up the process. They usually drop in with the heaver shell head end down. Cover the open case ends with a flat object and turn them over so the open ends are now standing on the flat surface. Carefully lift the plastic case off the standing cases and you can easily sort out the primer pocket size as it’s easy to spot the difference sizes when they are lined up with each other. I can sort out 500 45 cases in less than 10 min. It also works for sorting 9mm and 380 as its easy to notice the case length differences when they are in the plastic holder.

Location
South of you

Many people buy the 650 to make ammo FASTER. The primers will explode if you slam them fast into the primer pockets, especially if one gets sideways in the primer fill tube.

FAST ammo is NOT GOOD AMMO. I suggest that you slow down, and be more careful. DO NOT SLAM the primers into place.

I have never had a stack of primers explode like that. Tens of thousands of reloads. Never even had a single one explode in a single station press. If you go slow you can fold primers in half and they will not go bang.

Think of how a primer is designed. Firing pin hits it with speed, and force of speed. It takes both to make it burn. By going too fast, you are simulating the action of the firing pin, hard and fast. So, slow. Don't try to get 650 9mm's per hour, or 800 or 1000 per hour. That's not going to be good ammo, and could cause the type of explosion you incurred.

When I do my reloading classes, on a single station press, I always watch for students to start getting lazy, and slam the primers into place. I always stop them, remind them about the firing pin example, and allow them to continue, slow pressure to place the primers in the primer pocket.

I doubt that the chain reaction had anything to dob with the maker of the primers, bad batch, or anything like that.

Duke has a good point on this.

I have crushed the ever loving shit out of FEDERAL primers (the most sensitive) and never had one go off.... but thats because I didn't slam the shit out of things when priming,

Location
Northwest Assachusetts where the dragons be

drgrant said:
Duke has a good point on this.

I have crushed the ever loving shit out of FEDERAL primers (the most sensitive) and never had one go off.... but thats because I didn't slam the shit out of things when priming,
Click to expand...

same. slow and steady. thankfully i figured the small primer 45acp gig on my Lee Turret long before i got the XL650. that trained me then and there to inspect cases as they came out of the brass cleaner.

I crushed these 2 last night. Notice how they started to fold. They are Federal 100. 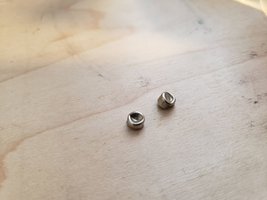 I too have had a single primer go off while attempting to seat, no harm done other than needing a clean pair of shorts. It's hard to see how the whole stack can go off, but I've seen photos of the result. I have crushed many primers with nothing happening, Like Duke explained primers are meant to go off with a fast hard hit.

Personally I save the hard to find Federals for my revolver loads. When I use them in my 650 I always give the primer system a thorough cleaning and go a little slower.

I have crushed many primers due to feeding issues, using hand primers. Typically due to miss feed in the hand tool. Luckily never had a detonation.

Time to put on the brown pants.....Dead Pool
Q

Nope, never. Thousands+ of rounds down the chute, have crushed them (inadvertently) 10 ways to Sunday in the press and even dropped the turret on one with an already primed case in place and a primer in the tray. I am reeeaallly skeptical of claims of the whole stack going off..wonder if it’s more folklore at this point..the design does not support something setting off the entire stack of primers...other than faulty primers.

Original Dillon manuals came with a warning about not using Federal Primers.

Quite_Exasperated said:
I am reeeaallly skeptical of claims of the whole stack going off..wonder if it’s more folklore at this point..
Click to expand...

Don't think it can happen? Sure the odds of it happening are very low. But it can and has happened,

How likely is it that a loaded round, say a 45acp loaded with a lead round nose bullet, will go off by the primer being struck while about 100 rounds are being poured from an Akro bin into an ammo can?

I ask because it happend to me 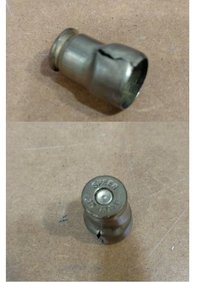 The case expanded to way larger than the diameter of the bullet, The bullet was found in the ammo can with no marks on it, it was loaded in a different case and fired.
Yes it was a small primer 45 case, if anything the smaller primer makes it more amazing. That was a Winchester primer

Yup totally my fault, broke a light above and ruined a perfectly good pair of pants.
The good news is Dillon replaced all the parts for free. Except the pants. 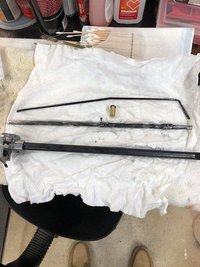 Jbarila said:
Yup totally my fault, broke a light above and ruined a perfectly good pair of pants.
The good news is Dillon replaced all the parts for free. Except the pants.View attachment 350708
Click to expand...

Glad you’re okay. Can you give us the debrief? What were you doing at the time? Any leading indicators there was a problem? Did you force something? Anything feel funky in the press just prior? Crack pipe set it off? Haven’t seen pictures of this before..

I was setting up a Mark VII auto loader, indexing was off a tiny bit. Crimped a primer and off it went. I was rushing and thought it was ok. Lesson learned. Same thing could happen if you force a handle. Remember if it isn't smooth and you get a solid stop don't force it.

That's why Dillon Puts a heavy duty pipe around the primer tube. All the pressure goes up and launches the primer follower. Thats what broke the fluorescent light above. Wasnt really very loud, the worse part was the light breaking.
Q

Jbarila said:
That's why Dillon Puts a heavy duty pipe around the primer tube. All the pressure goes up and launches the primer follower. Thats what broke the fluorescent light above. Wasnt really very loud, the worse part was the light breaking.
Click to expand...

10mm reloading case failure. What could cause this?
2

Reloads for a Springfield M1A?
2