Picked up my last pair of Wartime 32s

Coming to the end of restocking my wartime German/German occupation .32 collection. In the mail last night was this Sauer 38H, police proofed, from early 1943. Also on its way is an Imperial proofed M07 Dreyse from late 1916. I'll take a new family pic when it gets here. By 'end,' there is not too much left in this field that really interests me. I think there are 4 German .32 use pieces left from WW2....Spanish Astra300, French Ruby, French MAB D, and the Hungarian Femaru M37. There is still the Imperial M4 Walther pistol as well, but finding an Imperial marked one in decent condition that doesn't break the bank has been difficult.
t

Will you be getting the new acquisition to the range any time soon?

Depending on weather/chores I hope to get to the range later this week. Gew98M gets first crack, then the Sauer and Dreyse. Probably two trips.
t

Dreyse is as awkward as the Sauer is sweet. 35 feet.
t

I haven't shot my Dryese in years. Bought it, had some shit steel case .32 which was a mistake, broke the extractor on the second shot and haven't fixed it yet.

Found the final slot of my Imperial proofed .32s, right here on NES. Here is an early 1916 Walther M4 with my other Imperials...Mauser, Sauer, and Dreyse. Technically there were other Central Power .32s; namely the Steyr, Frommer, Bayard, and Beholla, but these were the big 4. Walther held a military contract in 1915 to make 250,000..but they didn't quite get there (225,000). They had to subcontract out, first to Immanuel Meffert (m) of Suhl (this piece), then another six manufacturers.

Had it at the range today. Having a LEFT ejection port was nice. 50 rounds Fiochhi ball at 50 feet. Very comfortable pistol; room for all my fingers. Very easy to take down. Problems with the magazines (1 original, 1 repro) and mag catch spring. Original mag would pop out of battery 50% with the next shot FTF. The repro mag stayed in, but stove-piped 50%. Accurate none the less. Maybe a new spring would help. 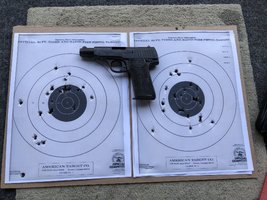 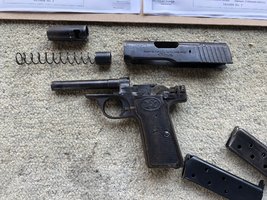 Your missing a Ruby pistol.

Picked up my first Krag

picked up my garand from fedex monday

Picked up a couple of rifles today