I have a tan YJ hard top I want to get rid of. Some A-hole broke the passenger side window and the back glass out of it. The driver side window is fine, someone also cut a tilting sunroof into it at some point (I don't get it either... It's a Jeep). The Fiberglas is in fine shape, it is 25 years old. The window has a goldish tint to it, if you know YJ's you know what I am talking about.

Anyway it's free I would like it to be used by someone if for nothing else than for parts. Otherwise I am going to crush it and put in in a dumpster. If you only want the window or sunroof you can have them. You can even pull them here if you want and I will junk the rest. The only thing is you only have till next Sunday night (9th) to come get it or it's going in the dumpster before it gets pulled. Again it's free but I won't say no to a box of ammo or six pack of beer. 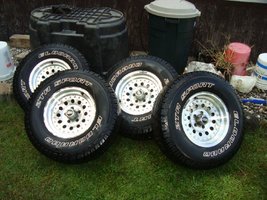