Whagt kid of pussy are you? Real men carry 500 S&W

1) 9mm Ammo is cheaper to buy
2) 9mm is more available and plentyful over all
3) 9mm is the caliber most used by police and the military
4) 9mm ammo will be easy to trader as many other owners own and need 9mm
5) If one of your 9mm pistol breaks and it can't be fixed (for a variety of reasons) you still have another 9mm to use with the ammo you have already bought/stored.
6) Having 2 pistols shooting the same caliber means you have less ammo to buy. You don't have to buy/accumulate two different minimum amounts of distint ammo.

One is none two is one.

40 with a conversion barrel for 9mm.
Lots of 40 cal on the shelves,hardly any if none of 9mm.

perry1386 said:
Without starting a caliber war, that I think this is going to...

9mm is an less expensive round, I wouldn't say ANYTHING is easier to find right now then anything else.
Click to expand...

Dunno, I looked and looked and no .40 to be found anywhere on my shelves. Of course, I no longer actually own anything in that caliber, so no reason to 'find' the ammo. Hence, I conclude 9mm is more common.
W

Don't you guys know that not only is a 40 good for shooting but it can be used as a bomb too. Kaboom!

Funny story: there's a local yokel "range" that amounts to a cut out side of a hill in NH that I shoot at when I visit a friend up there. Last time I was there, I had my DSA 16" FAL clone with a M4-72 comp. The M4-72 generates a fair amount of concussive blast and kicks up dirt beneath. Its a loud comp but it kills recoil, I just double up on ear pro, so I don't mind.

There were two guys there in their 60s-70s. One was in full Cowboy Action regalia, including chaps, and he had a .500S&W Magnum. The other one was bare-tiddies shirtless with an Aero AR homebuild that he referred to as his "Corona Virus Gun", which he spent exactly $1200 on.

Anyways, Cowboy Action guy shoots his rather large revolver and it makes a nice-sounding "thud." I looked over some while I was loading FAL mags and the gun seemed relatively tame. Went about my business loading mags until I was good to go. I started shooting my DSA and when I finished, my friend pops into my left side view hinting over at the old guys. Cowboy Action guy said "that gun's too f-ckin' loud!"

I handed the DSA over to my friend so he could shoot a mag. By the time he was done shooting, Cowboy Action guy left in a huff. I find it really ironic that someone who would shoot a .500S&W Mag would bitch about the noise generated from a .308. But hey. What do I know?

Whereupon, Captain Nips came over when we were done, and he said something like "I told [Cowboy Action guy] that it wasn't a .223 because the mag's straight!"

40 S&W is out of favor since LE seems to be going back to nines. In normal times, 9x19 ammo is much cheaper than fotay, especially the FMJ or copper plated practice stuff.

Coyote33 said:
Interesting to look at this in hind sight.
Click to expand...

Necrothread raised from the dead.

Yes. I have a P226 that I've only put a few mags through and it's in .40. A 9mm conversation is what I'll do once ammo is readily available again (I'm picky).

can we get a “aww, not this shit again“ meme?

the ONLY upside is ammo tends to be more available... as it is massively less popular than 9mm.

I’ll watch for your classifieds posting after you shoot it.... 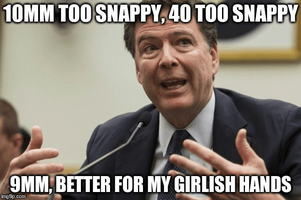 357 sig. Easily converted to .40 with a barrel swap and same mags can be used.

I never have a problem finding ammo for either.

Regarding the fotay, I think EC said it best

EddieCoyle said:
It was invented by French women so that they could have something to shoot while their husbands cooked.
Click to expand...

That was a great old thread

Mark from MA said:
357 sig. Easily converted to .40 with a barrel swap and same mags can be used.

I never have a problem finding ammo for either.

One of my favorites is my S&W M&P 40C with an Apex trigger along with a stock 9mm barrel and a Storm Lake .357SIG barrel. With three choices, I can't go wrong

cockpitbob said:
Regarding the fotay, I think EC said it best

That was a great old thread

I was looking for the quote. You beat me to it.

I've come to appreciate the 9x19. It's incredibly efficient - cheap factory ammo in normal times; very light recoil; ability to put more rounds on target more quickly than a fotay. I have a Glock 23 - great gun; in retrospect probably would have done better with a G19. G43 is the Glock version of the J-Frame - low capacity, small, fits in a pocket holster. The fotay is great for USPSA where it is needed to make "major power factor" in certain divisions and is used in relatively heavy guns (the various widebody 1911oids).
Last edited: Jul 24, 2020

Say, is that the new Tandemkross charging handle?
M 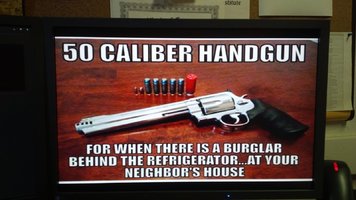 Anyone know where I can get a HUGE IWB holster?

Three calibers out of the same gun. The slide on the 9's don't allow the larger barrels to be fitted and the .357 SIG guns are too hard to find. 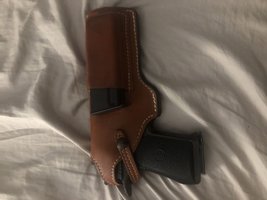 Mattmatt617 said:
View attachment 376514
Anyone know where I can get a HUGE IWB holster?
Click to expand...