Thank you for contacting me about Brett Kavanaugh's nomination to the Supreme Court. I believe that there were many reasons to oppose Justice Kavanaugh's nomination, including the serious allegations of sexual assault by multiple women, his radical views and his record as a judge, and the secretive and rushed process Republicans used to advance his nomination. That's why I voted no on his nomination and urged all of my colleagues to do the same.

Millions of Americans watched Dr. Christine Blasey Ford tell her harrowing story of being sexually assaulted by Brett Kavanaugh. The courage she showed was remarkable, and her testimony was credible and compelling. I believe her. And Dr. Ford wasn't alone. Other women also described being sexually assaulted by Justice Kavanaugh or seeing him engage in inappropriate sexual behavior. Despite these alarming allegations, and Justice Kavanaugh's partisan, insulting, and disqualifying testimony before the Senate Judiciary Committee, Senate Republicans voted to put Justice Kavanaugh on the nation's highest court.

Justice Kavanaugh's nomination was the latest step in a decades-long campaign by right-wing groups and their billionaire backers to capture our courts. Over the last forty years, as the rich have gotten richer and working families have struggled to make ends meet, the scales of justice have been weighted further and further in favor of the wealthy and the powerful.

Justice Kavanaugh has furthered that tilt. Over the course of his career, he has voted to limit the ability of women to make their own health care decisions, opposed a ruling protecting women's access to birth control under the Affordable Care Act, opposed rules designed to address climate change and protect the environment, and ruled that the Consumer Financial Protection Bureau - the agency that has returned $12 billion directly to people cheated by corporate lawbreakers - is unconstitutional. Justice Kavanaugh also believes that sitting presidents should not face personal civil suits or criminal investigations or prosecutions while in office.

I believe that the credible allegations of sexual assault, his record as a judge, and the broken process Republicans used to advance his nomination should have disqualified Justice Kavanaugh from a lifetime position on the nation's highest court, where he will be making decisions that affect every person in this country for a generation. I will continue to oppose judges who will not stand up for every American and will fight for judges committed to equal justice under law.

I appreciate your reaching out to me about this issue, and please do not hesitate to contact me in the future about issues of importance to you.

So she didn't like his impeccable lifetime record of being a fair and honest judge and someone who has been praised by his peers as such? Or was it after reading the first 1,000,000 pages of documents that were released she felt she needed another 100,000 to be sure? Or was it that she was fired from the Consumer Financial Protection Bureau for it and her being corrupt as f***? Or was it that the Republicans catered to the Democrats at every turn, extending the process far longer than it should have been?

NOW all you have to do is go VOTE
F

She's slipping... not one word about his being 'soft on gun control'.

Happy to hear things from a Native American perspective.

You guys never cease to crack me up.

Yup, drawing from all those years of her people's oppression.... what a phony f*ck!

"The rich get richer" says the multimillionaire politician.

I wouldn’t even tea bag that squaw if it was the last warm place on earth.

LoginName said:
She's slipping... not one word about his being 'soft on gun control'.
Click to expand...

Those are his "radical views"

I'm with you Lizzy, said no one.
F

His record as a judge matched the 2016 Obama appointee 95% on the same damn court.

He lied 0 times and she lied at least 4 (4 inarguable lies). She's not credible - the witnesses she claimed to have said "nope" including her friends.
J

I guess Kavanaugh was quite a win then.

Wickedcoolname said:
"The rich get richer" says the multimillionaire politician.
Click to expand...

decades-long campaign by right-wing groups and their billionaire backers to capture our courts
Click to expand...

He was Jewish and not an indian. But the high cheekbones could fool a Senator.

Fixxah said:
He was Jewish and not an indian. But the high cheekbones could fool a Senator.
Click to expand...

It was three years ago, but it never gets old, possibly my finest work; 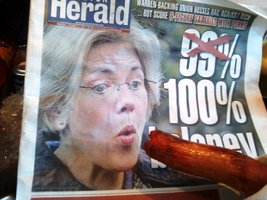