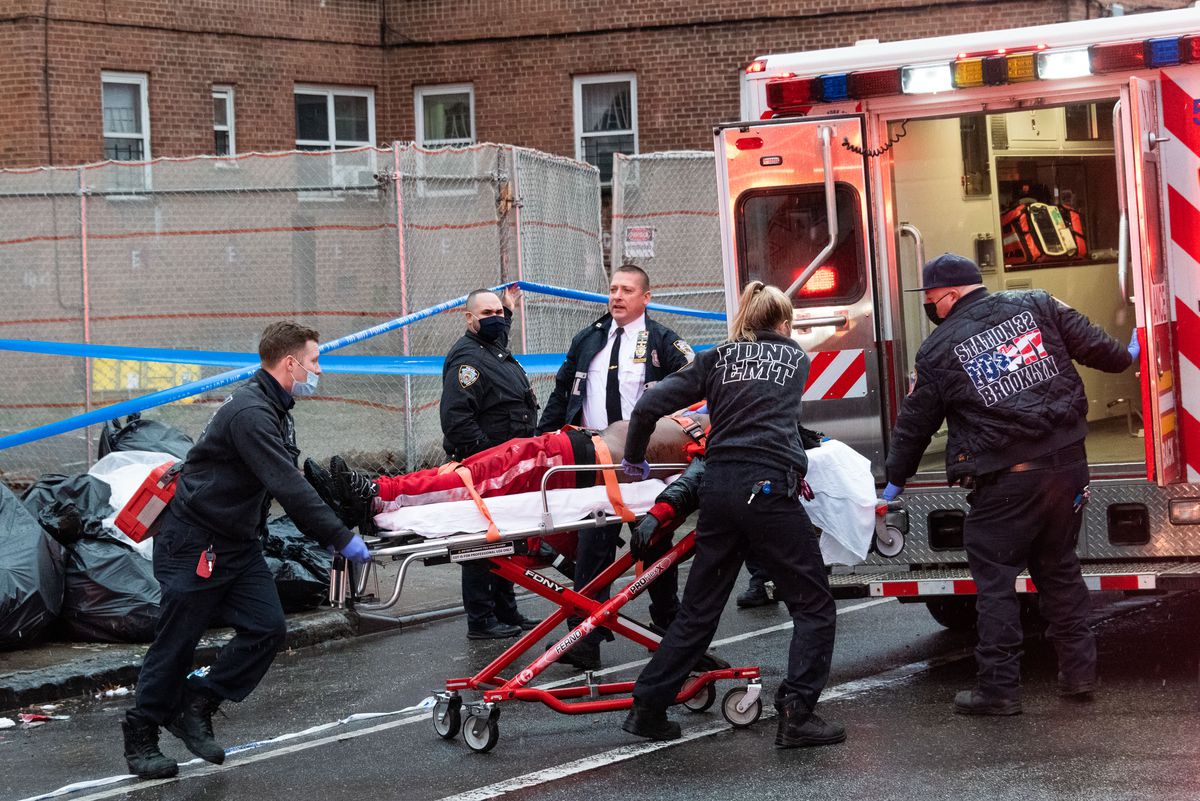 The NYPD closed the book on 2020 with a 97% jump in shootings and a nearly 45% surge in murders — and they couldn’t wait to turn the page.

On top of a pandemic that took more than 25,000 lives, New York City endured a soul-crushing crime surge in 2020 — a 97% jump in shootings and a 45% surge in murders.
The NYPD released the sobering preliminary year-end stats Friday, eager to turn the page on a tally that recorded more shootings from mid-May through mid-September than in all of 2019.
When the ball fell in near-empty Times Square, the NYPD counted 462 murders across the city in 2020 — 143 more than in 2019.
Shootings were also up — cops counted 1,531 shooting incidents across the five boroughs, 754 more than in 2019, officials said. In those incidents, bullets hit 1,868 people.

The hasn’t been such alarming violence since 2006, when 1,565 shootings were reported, according to Police Commissioner Dermot Shea. 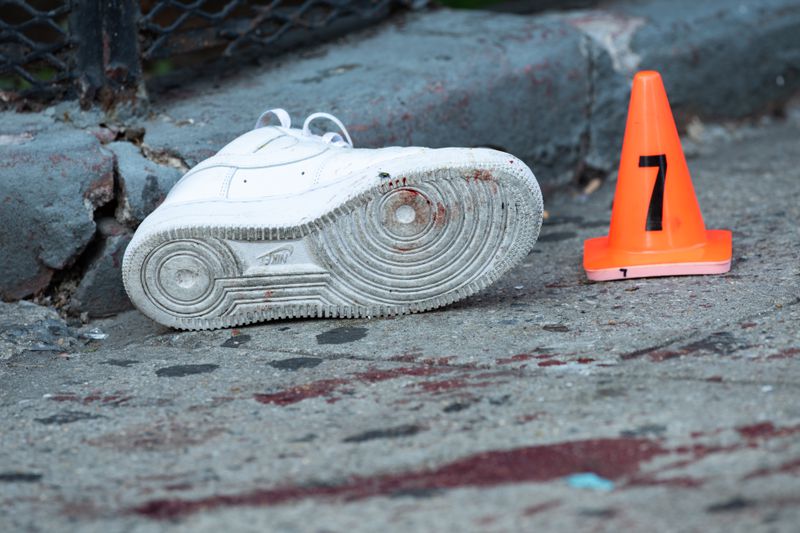 A 6-year-old boy was taken to Kings County Hospital with a gunshot wound to the left leg after he was shot on Crown St. and Nostrand Ave. in Brooklyn Sept. 7. (Theodore Parisienne/for New York Daily News)
The violence escalated the following week when 37 people were shot, prompting a surge that exploded after the police killing of George Floyd in Minneapolis May 25, which set off protests, looting and rioting in the city that brought a response by thousands of cops.

By early summer, shootings had skyrocked, culiminating in a horrific July 4 weekend in which 41 people were shot, nine fatally, in one day — carnage that police say was primarily caused by street crews and gangs.

From the first week of June through the second week of September, 985 people were shot in the city, according to statistics. That was far ahead of the 777 people who were shot in all of 2019.
At the other end of the painful tally, there were decreases in rapes, robberies and assaults, although the stats showed jumps in burglaries and car thefts, officials said.

The out-of-control bloodshed came as a new state law stripped judges of much of their discretion to keep potentially violent offenders behind bars, police say.

Shea and other officials blamed the bail reforms on the surge — and say the situation was worsened when scores of jailed prisoners were let out to mitigate the relentless coronavirus spread among that population. Advocates of the reform dispute Shea’s belief — but there was no disputing the carnage. 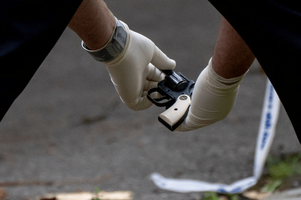 A man was rushed to Jacobi Medical Center in critical condition after he was shot five times in the torso at 1509 White Plains Rd. in the Bronx Aug. 29. (Theodore Parisienne/for New York Daily News)

The bullet spree’s youngest victim was Davell Gardner, a 1-year-old shot in his stroller after two men stepped out of a dark-colored SUV and opened fire at a cookout in Raymond Bush Playground in Bedford-Stuyvesant, Brooklyn, on July 12.

On Aug. 9, Christopher Ross, 53, whom friends described as a playground peacemaker who helped keep children safe, was fatally shot as he played handball at his favorite court in Crown Heights’ Lincoln Terrace Park, the victim of a stray bullet.

In November, seven people were shot, one fatally, during a “sweet 16″ after-party in Bedford-Stuyvesant, officials said.

And on Dec. 23, 16-year-old James Solano was shot in the head as he was ambushed in the doorway of a Bronx deli. Suspected gunman Marquis Beckford, 22, was arrested five days later.

“I see better times ahead,” Shea told reporters the same day Solano’s alleged killer was arrested. He vowed to sharpen the NYPD’s focus on violent street gangs and “get people off the street that are terrorizing neighborhoods.”

“This year, we will redouble our efforts to improve quality of life, better engage our young people and eliminate gang violence,” Shea said in a New Years message to his officers Friday.


“Make no mistake: We have a tough road ahead. The city needs you now more than ever. People are looking to our police department — and to you — for reassurance, guidance, and a sense that our city is under control.” 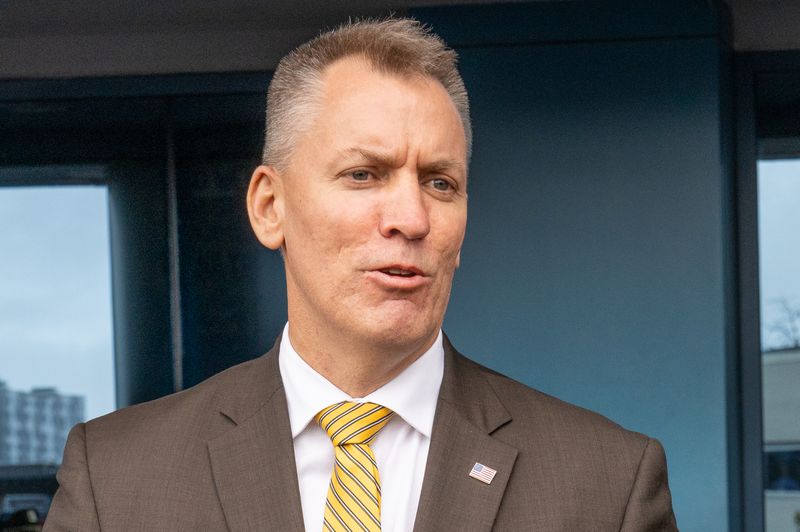 “Everybody saw this coming last December,” said O’Donnell, referring to bail reforms allowing a free pass for most misdemeanors and nonviolent felonies. He charged Mayor de Blasio and the city’s district attorneys with decriminalizing various offenses to the point “where there are bodies in the street.”

“Where are the people who mandated this?” O’Donnell asked. “At the very least they dropped the ball. They tragedy is we have more and more dead kids. Their lives do not matter.”

Advocates for criminal justice reform say there’s no evidence linking bail reform to the crime surge. Data collected by the Vera Institute for Justice shows out of the 2,000 people facing open gun cases at home in July, only 40 were rearrested on weapons charges. 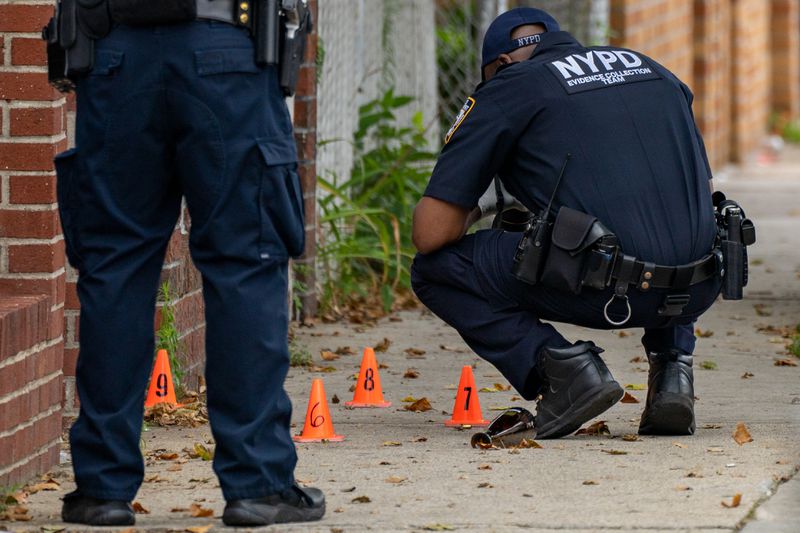 “Shootings are up nationally, which clearly shows this is driven by the pandemic, not bail reform or any forces that are specific to New York City,” spokesman Bill Neidhardt said.

“Yes, Mayor de Blasio has driven down arrests, that’s because he is opposed to mass incarceration,” said Neidhardt. “The mayor regularly calls for people who commit violent crimes to be arrested.”


In his view, the city’s decision to cut the NYPD budget by $1 billion, along with decisions to remove School Safety from the NYPD umbrella and to have social workers answer calls involving emotionally disturbed residents, leaves the city and the police department in a tough situation in 2021.

Eterno, who teaches criminal justice at Molloy College in Rockville Centre, Long Island, said the city’s decisions to curb the department were done without any knowledge of what police officers actually do.


“Ninety-five percent of police officers don’t fire their gun in the line of duty, but the general public doesn’t know this,” he said. “They need to understand this far better. Otherwise, you just get these quick fixes. It shouldn’t be because you watch an episode of ‘Law & Order,’ you know policing. You don’t.”

The NYPD rank-and-file officers are now “demoralized,” he lamented. “The one thing I felt I had as a cop was that I was on the side of good. The cops today are not there.”

Socialist Nirvana. de Blasio is what they all deserve.

#BLM. Even Clinton (Bill, not that turd of a wife of his) understood that in order to save black man lives, you need increased policing and serious F'ing up of criminals in these neighborhoods.

At some point in the last 21 years, these dirtbags have become "lovable rogues." Now we can't police because DatsRassiss! So more young black men die and somehow we focus on the infinitesimal % that get shot by police accidentally.

My cousin works violent crimes for the FBI in NYC. We stayed up until midnight drinking whiskey at Christmas last year, and he predicted this would happen because of that stupid law. When are liberals gonna understand that violent criminals don't jist need a hug and a "second chance"?

I myself, do not assume most liberals can fathom solutions to society problems or for that matter any other complex issues. Their brains from what I have witnessed over the years just is not wired for common sense. Major cities in New York, New Jersey, Minnesota, California, Illinois, Oregon and Wisconsin should not be a surprise to anyone here if they follow the politics and news from these cities.

You would think that other states, that haven't quite made it there yet, could see what has been a clear pattern degradation, but, even some of those are like a moth to a flame with the divisive policies. 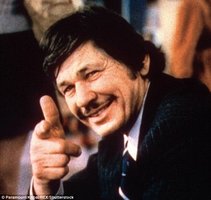 Couple of years and Bloomberg will be comparing NY numbers to the NICS database to justify more laws.
O

NYC should go to Chicago for help. Jack.

Clearly all we need is less police and more social workers!

jamison55 said:
When are liberals gonna understand that violent criminals don't jist need a hug and a "second chance"?
Click to expand...

Funny. They do understand it and it is exactly how it is done and why it’s done. Crime and gangs is a government’s best friend. It justifies all the rest they are doing to you, in the name of keeping you safe.

As if you were safe to begin with - then why would you need them?

why do dead gangbangers' shoes always fall off when they get plugged?

one-eyed Jack said:
NYC should go to Chicago for help.
Click to expand...

If NYC's problem were merely a surplus of crime
and not also a shortage of support for police work,
the entire Chicago PD would move East at end of shift.

Because Chicago is mistreating their police so badly,
they'd all quit if they had somewhere better to go.

jhblaze1 said:
why do dead gangbangers' shoes always fall off when they get plugged?
Click to expand...

Number of criminals who improperly own guns increases in California