"there is just too many white people in here, and this is a space for people of color.”

I don't agree with any of this racial dividing under the guise of inclusivity.
I guess that makes me a racist so I might as well embrace it. 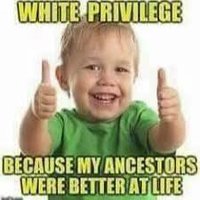 "In wake of 'too many white people in here' video, UVA students are asked: Should whites be allowed in school's Multicultural Student Center?

A black woman was recently caught on video in the newly opened Multicultural Student Center at the University of Virginia saying there are "too many white people in here, and this is a space for people of color." The university's official stance is that the MSC is for all students.

"Should whites be allowed in the Multicultural Student Center?"

"I'm pretty much fine, like, if that space is [for nonwhites]," a white male student replied, adding that "we have more areas where we can feel comfortable, and if [people of color] don't feel comfortable in those other areas ... it's nice for them to have a space where they do feel comfortable."

A black female student noted that it's important to "be mindful that it is a space where students of color go to be comfortable and to feel safe and supported, and when ... white students ... are in there doing something that could be perceived as disrespectful ... you have to understand that that could be hurtful."

"White people need to be aware of the fact that it's not a space for them and make sure that ... when they're entering ... that space they're not ... taking up the space [from] people of color who want to use it," a black male student said.

He added that the MSC "is a place for people of color and ... multicultural students to gather, and so they kind of want that to be a safe space for them," but that "you don't want it to be exclusive" to the point that "white people are being ostracized ... so it's kind of ... a tough balancing act."

But in the end he noted that UVA is predominantly white and that the school's "spaces ... are made for white people," and therefore other spaces where people of color and LGBTQ people can feel "safe" should exist.

A black female student added that UVA has a "history" of "oppressing people of color, and so it's very hard for people to have a space where they feel, like, safe, and the MSC is place where we feel safe." She also said that if white people do enter the MSC, it should be to "engage" with culture and to attend MSC events.

A white female student said the MSC is "a multicultural student space and that white people need to be aware of the spaces that they occupy" and that the black woman who spoke in the viral video "had a good point, and she wasn't aggressive."

Another female student said "as a white person I don't want to say that I should be allowed anywhere, and I think it should be up to those organizations to decide."

In wake of 'too many white people in here' video, UVA students are asked: Should whites be allowed in school's Multicultural Student Center?

'As a white person, I don't want to say that I should be allowed anywhere'

Eventually people are going to wake up and realize that today's Universities are the root of all of our social problems.

Inclusiveness - too many white people here

BBQ.Uncle said:
Once upon a time...

Inclusiveness - too many white people here
2

Is there a Hell hot enough for these people?

Britain is too tolerant and should interfere more in people's lives

There Still Is Good People Out There...