The5thDentist said:
Is this true? Did Cobain actually say this?
View attachment 181996
Click to expand...

Snopes says Not True because they couldn't find any reference to it when they googled it.....

Seems always to be related to people going straight Republican from what I've heard at least. Is there an option to auto fill all for a specific party rather than clicking each individually?

Good to see the people are wide awake in this election and noticing and calling out the fraud...Keep up the good work people don't let these ****ers steal this one.

headednorth said:
Seems always to be related to people going straight Republican from what I've heard at least. Is there an option to auto fill all for a specific party rather than clicking each individually?
Click to expand...

That's what it sounds like. What a horrible idea. It just screams "I don't care who's running, but I like the look of that letter next to their names".

Bfatz said:
Good to see the people are wide awake in this election and noticing and calling out the fraud...Keep up the good work people don't let these ****ers steal this one.
Click to expand...

Location
Deep in the woods of SC

ToddDubya said:
That's what it sounds like. What a horrible idea. It just screams "I don't care who's running, but I like the look of that letter next to their names".
Click to expand...

I used it today. But I knew ahead of time that the R candidates were the ones I was voting for anyway. So it just saved me some time. Click "straight party-republican" Look at the screen to confirm the correct names are there. Select candidates for the offices that had no republican candidate. (local gov shit) Click confirm. Done.

Of course that was after I showed my ID confirmed the info on it and had the back of the license scanned. What a burden that was.

ToddDubya said:
That's what it sounds like. What a horrible idea. It just screams "I don't care who's running, but I like the look of that letter next to their names".
Click to expand...

I'd like a straight "Vote against the incumbent party" option. That is essentially what I did on mine.

Congratulations on a tremendous campaign!!
You have dealt with an unbelievably slanted & negative media & have come out of it beautifully.
You have proved to be the ultimate competitor and fighter!! Your leadership is amazing!!
I have always had tremendous respect for you, but the toughness & perseverance you have displayed over the past year is remarkable.
Hopefully, tomorrow’s election results will give you the opportunity to Make America Great Again!!
Best wishes for great results tomorrow,

I know that this is reported as being true, but I'd have to watch Belichick personally write and send the email/letter. Sports reporters can't get anything out of Belichick. If they asked him what time of the day it is, he would reply, "I don't know. I'm only focusing on playing the Seahawks next Sunday."

M125X said:
There should 100% be all paper ballots! No more computerized. There are a ton of problems across the country right now, they all seem to be switching votes to D, never to R...
Click to expand...

The problems with the voting machines are INEXCUSABLE, but at the same time fraud with paper ballots is going to be much harder to detect. Paper ballots are not even close to an answer to our problems.
G

Look at the screen to confirm the correct names are there.
Click to expand...

If you know how to program, then you know that this doesn't guarantee anything. Just cuz it looks right on the screen doesn't mean it's been programmed to record what the screen says.

I don't know for sure what it indicates, but the gunfire around home has been many times what it usually is. Non-stop all day from quite a few neighbors, including those that usually don't show any shooting activity. The sun has set and they're still going at it. Enthusiastic about Trump? Pissed that they think he's going to lose? Not sure!

by exposing their bewbs ...

, stupid femen, he was grabbing the other parts ...

Boris, more importantly, has Putin told you how he is rigging this election?
Click to expand...

yeah, he was flying back from the Epstein's island when he called, it's totally rigged for whomever will win.
Click to expand... 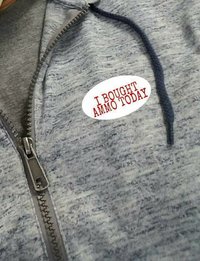 Went to my polling place, didn't see anybody open carrying (except the one cop who is always there). Outside the usual supporters were there with signs... just one tiny little sign for Trump/Pence, multiple people there for H.

On a positive note, by 5PM the turnout was already better than we had for the primary, with ~70% of registered voters having cast a ballot.

SteelShooter said:
Snopes says Not True because they couldn't find any reference to it when they googled it.....
Click to expand...

Snopes has a point -- Pretty much everything Cobain ever said in public is online, even quotes from 1993.

Interesting how the quote just appears without any link to a source, on August 2nd, 2016. Never even hinted at before that date, not mentioned in any book, or biography or on any tape.


If you want to give somebody credit for a Trump prediciton, try Adam Carolla:

I'm still doubtful Trump can pull this off. His path to 270 votes is extremely narrow and a lot of things need to swing his way to win this thing.

Location
Deep behind enemy lines in the very heart of libtu

The voter turnouts you guys are reporting is heartening to me. Mainly because I firmly believe liberals are either too lazy or too busy scheduling their Kickball League practice and a night of artisinal ciders and cheese with their besties to bother voting.

My son posted this on FB. Whether he wrote it or not, I'm not sure.


Imagine it is November 9, 2016 in America and we wake up knowing who our new President will be. If it is Hillary, think of the groups of people that will celebrate. Illegal Immigrants, criminals and future criminals who will be supported for pulling a gun on a police officer, planned parenthood, the media, and the list goes on and on that represent everything that is wrong with America. If you're still "with her," look around at who you'll be celebrating with. Now imagine waking up knowing that Trump is our new President. You may or may not like him, or really know what kind of president he will be. But here are some things you will know for sure:
• The Clinton Corruption is destroyed and rendered powerless.
• The media has been neutered forever.
• Career politicians will have lost all job security.
• The guns in your home will safely stay there.
• Preachers will be free to preach truth without the threat of government interference.
• Israel will have no doubt that we are truly their ally
• Iran will not get one more plane full of cash.
• No more apologies to the world for being great!
• Our enemies, most of which help fund Hillary's campaign will definitely be a little scared.
• Our healthcare rates stand a real good chance of going down.
• There is at least some hope that new manufacturing jobs will be coming back to your state.
• The drug cartel and other criminals currently crossing our borders will realize their days are numbered.
• The police will be supported so they can restore law and order.
The list could go on and on, but it sounds like America may be on the road to becoming great again within the first few hours on November 9 if Trump does win.
Copy and paste this as your status if you support and will vote Donald Trump for president 2016. #trump2016.
REASONS TO NOT VOTE HILLARY

If you are Gay, Why are you voting for Hillary when she wants to bring in thousands of refugees that believe all Gays should be executed?

If you are Black, Why are you voting for Hillary when she admires Margaret Sanger and defends Planned Parenthood who want to abort as many black babies as possible? Exterminate the black race because they are like "weeds". (Margaret Sanger quote) Most of those clinics are in Black neighborhoods.

If you are a Christian, Why are you voting for Hillary Clinton when she wrote her Senior thesis on Saul Alinsky who dedicated his book 'Rules for Radicals' to Lucifer (the Devil)? She says he was, and still is her mentor.

If you are a Veteran, in the Military, or closely related to a Military member, Why are you voting for Hillary when she left those men to die in Benghazi and had the nerve to lie about it over and over again? They called for help but the help was told to stand down.

If you have a factory job, Why are you voting for Hillary when she supported TPP? Factory workers are being laid off because jobs are going over seas. Don't forget the deals she's made with china. She also welcomes open borders and illegals to get benefits to be paid with Your tax money.

If you are poor, Why are you voting for Hillary, when she is supporting Wall street and all the big banks? Big banks keep poor people poor by destroying the poor man's credit by allowing medical bills and collections to affect your credit scores so you can pay higher interest rates than the rich; Taking much of the little money you earn.

If you breathe, Why would you vote for Hillary when she and the Clinton crime family have left a trail of dead people that did not agree with her, or they knew too much?

stacarter said:
The voter turnouts you guys are reporting is heartening to me. Mainly because I firmly believe liberals are either too lazy or too busy scheduling their Kickball League practice and a night of artisinal ciders and cheese with their besties to bother voting.
Click to expand...

The problem is, it won't matter. They've managed to corrupt the system to the point that what is reported tomorrow morning won't match the legal votes cast. For those bastards, there's simply too much at stake. And the Soros money ensures the "Media" will back it up.

Pilgrim said:
My son posted this on FB. Whether he wrote it or not, I'm not sure.
Click to expand...

She managed to corrupt the ****ING FBI.

Welcome to our new reality.

Hey my ban ended just in time for election day. Lets see if I can make it through the night and remain a member. Anywhere on the ballot where there was a democrat running unopposed, I penciled in the write in line (democrats suck) wonder if that will get it tossed in the circular file? Who cares really, its MA so its not like my vote counts.

When Trump wins the rats will scurry. They're not on her team because they like her and what she stands for. They're on her team because it's good for their careers. Once she's clearly a liability, it's time to start putting some distance between you and her.
You must log in or register to reply here.
Share:
Twitter Reddit Link
Top Bottom