I am considering adding to my small revolver collection. I have a 22lr GP100, ruger 38special, and S&W performance cetner 357 mag. I am thinking a 44 mag needs to be added to the family. My question for you guys is, SA or DA? It would be for plinking, but would also carry it in the woods. Is the SA trigger much better? I do not understand the advantage of a SA, other than they are just super cool. Pete

Single action is old school. There is no advantage. You have to cock it every time to shoot.

Location
Behind the Iron Curtain - DPRM

DASA is the best of both worlds - JMO.

Generally SA only will be loading gate vs swing out cylinder. DA/SA pistols have a huge advantage over single action only. You can use the SA feature for accuracy and DA if you’re in a hurry.

I have one of each (got a single action first) and I much prefer my SA/DA Model 15.

SA is for when you wanna play cowboy.

Location
An island surrounded by land on three sides

I don’t believe any of my .22 revolvers are double action. If you want a .22 single action, look at the Heritage Rough Rider .22 Caliber Revolver they are under $200 so if you don’t like it , you aren’t out much.
D

If you have any intention to use a revolver for defensive purposes, go with a DA/SA. Single action only revolvers for defensive purposes have been obsolete since about 1885-1890 with the invention of the swing out cylinder and modern DA/SA revolvers. Not only do you have to cock the hammer with each shot, you're going to have to load the gun like a Colt SAA or a M1895 Nagant - poke out each case one at a time with the rod or a stick and reload one at a time through the loading gate. Assuming you get a traditional SAO revolver like a SAA clone. Also assuming that you're getting a modern gun that's drop safe and that you won't have to only load five in because you can't leave the hammer down on a loaded chamber.

Let me put it this way: people going into combat have favored DA/SA revolvers over SAO revolvers since the Crimean War. If a bear is attacking you, you're going to squeeze the trigger as fast as possible and you will want follow up shots as fast as possible. You're not going to want to sit there and cock the hammer between each shot and then do a Nagant-speed reload.

I lived in Grafton County, NH, where you'll run into black bears fairly often, and if I was going to buy a specific woods gun for New England, I'd buy a Glock 40 MOS and mount a RMR on it.

If you live in Mass, a G20 would work the same and you'd just have to have the slide milled. This isn't Alaska or Montana where you'll need a .44 Magnum for bears.

My experience has been that a plinking gun and a woods gun can be two very different things. Regarding any advantage of a SA only - I don’t think so but I’m not an expert. I have Ruger Vaquero 5.5 barrel in .357 that I bought for my son who is almost 13. Do I have other .357/38 spl he could shoot - absolutely, but that revolver is a fun as hell and he loves it. Plus, there is something very cool about pulling back the hammer with every shot.

I wouldn’t carry a heavy revolver such as the Vaquero on a hike - it’s just to big and I can get by with something smaller and lighter. My sp101 with a 3’ barrel or G27 along with hardcast loads can give me excellent performance for just about anything here in the northeast.

Buy what you want and have fun with it. I don’t think you can go wrong with a SA only... I really enjoy mine.

If you think you can get r done in six, a single action is fine.

Yes, a DA is far superior for tactical purposes. So what? You’re not gonna hammer out .44mag like Jerry Miculek, a SA is fast enough for the average person. You’re also probably not going into an extended gunfight requiring multiple reloads.

I have both SA and DA revolvers. I much prefer SA for overall coolness. I also don’t get into a lot of gunfights. I don’t always carry a reload for my CCW, so a full cylinder of .45LC is more than a .38snub in capacity.

But my next pistol will probably be a DA Ruger in .357, even if I don’t have one in SA. 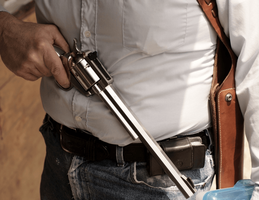 Deploying a SA revolver safely and quickly takes a higher learning curve and more regular practice, as you must cock the hammer "in the heat of the moment". DA is intuitive, draw, point and squeeze.

Thanks guys. All good info. Makes sense that most prefer the da/sa.

peterk123 said:
Thanks guys. All good info. Makes sense that most prefer the da/sa.
Click to expand...

If your going to woods carry or planning on using it for any type of defense purpose get a redhawk sa/da.

If your only going to target shoot or plan on reloading for it get the Ruger sa Blackhawk.

dhuze said:
I don’t believe any of my .22 revolvers are double action. If you want a .22 single action, look at the Heritage Rough Rider .22 Caliber Revolver they are under $200 so if you don’t like it , you aren’t out much.
Click to expand...

Actually, they're way under $200, CDNN has been selling then for as little as $109
I got one with the black pearl grips and second cylinder in .22 WMR for $139
For the price it can't be beat, and the trigger action is much better than expected.
Interesting feature is they have Colt SAA style (4 click) lockwork, but also have a manual hammer block safety.

Just remember if you want to shoot Single Action with a Double Action revolver... you can.
Not so much with trying to shoot DA with an SA revolver...

Then there was Colt's London factory, which closed when Colt couldn't compete for British and European contracts because the Euros wanted DA/SA revolvers like the Beaumont-Adams.

C. Stockwell said:
I lived in Grafton County, NH, where you'll run into black bears fairly often, and if I was going to buy a specific woods gun for New England, I'd buy a Glock 40 MOS and mount a RMR on it.

If you live in Mass, a G20 would work the same and you'd just have to have the slide milled. This isn't Alaska or Montana where you'll need a .44 Magnum for bears.
Click to expand...

That‘s exactly what I did. I have a place in NH and there are all sorts of critters, large and small, so I picked up a G40 MOS. The great thing is the same frame is used for the G20 and G41, so I’m on the lookout for those slides/barrels so I can have a 3-in-1 gun. I just need to pick up an SRO or RMR. I’m a huge fan of the SRO I have on another gun.

I realize that had nothing to do with revolvers, but it’s a good ”bear” option.

Beasty SA/DA Hunter or Plinker. 454 or 45LC. Good for those windy days! Bears? 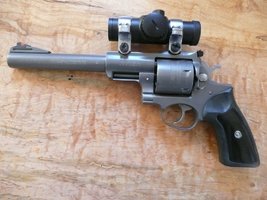 I enjoy my Ruger single six. It’s my first and only single action pistol and it’s fun to shoot. I throw it on the hip for hiking. It’s comfortable to wear all day in a Ruger leather holster with a thumb break.

I have a Colt SA Army in .45 LC. While it has visual appeal, as a gun it is pretty horrid. The rear sight is a simple gutter in the top strap -- I couldn't use it worth a damn even when my eyes were good. Loading and unloading it is a slow process. It is not drop safe -- when carrying it you must carry with the hammer down on a empty cylinder. A double-action revolver with a swing-out cylinder is superior in every way, except perhaps ultimate strength. 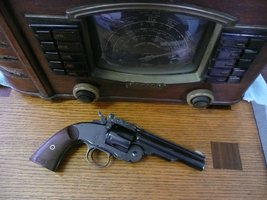 i have a ruger nm blackhawk in 45 colt to scratch the sa itch. way back, i had to have a colt saa. bought one new for $499 believe it or not, shot it a few times and sold it. wish i had that one back.

nothing wrong with a sa in .44 mag for woods carry. anyone who says they regularly double action shoot a .44 mag i'll call a liar to their face. anyone who says they do it and after the first shot hits their target i'll also call a liar. i've been shooting .44 da revolvers for over 40 years and i still thumb back the hammer if i want to hit what i'm aiming at.

it all come down to ya want a sa, get one. da/sa appeals to you, get one of those.

Life is short, get both!

Get a convertible .45 ACP/LC Blackhawk. I dumped my .44mag after using heavy loads in the LC cylinder. (325gr CorBon IIRC).
.45ACP for fun cheap practice.

Old style single action revolvers - what are the options in Mass?