The only thing to remember is that from a state compliance standpoint, making an SBR doesn't get you around the AWB.

So if you want all the evil features you need to start with a pre-ban lower.

Some will say this isn't true. I am not one who shies away from exercising my rights to the fullest extent of the law. I have shown this in dozens of posts calling people wusses for being afraid to do legal things. (carry unloaded handguns unlocked in their car. note - the requriement for a locked container only includes large capacity rifles and shotguns). Bottom line is I wouldn't chance it. If you want pre-ban features write the check for a pre-ban lower.

With that said, you can build a very nice SBR that is post ban. I prefer muzzle brakes and fixed stocks. So for me it wouldn't be a big deal.

These are 2 photos of a pre-ban SBR I used to own. In one instance it is completely post ban compliant except for the flash hider.
In another its fitted with a muzzle brake and all that would be required to make it appear post ban is removing the lug and pinning the stock in place.

the funny thing is that these pics are only separated by a couple of months. ARs really are like Barbie dolls. Ha.

p.s. Yes I know the scope is mounted too far forward in the bottom photo. Also, hodge podge of riser and rings is crappy. I was trying to figure out if I wanted to use a 1-4 scope on it before I bought a proper mount. And finally, you should not rings or a scope mount so that half is on the receiver and half on the handguard. 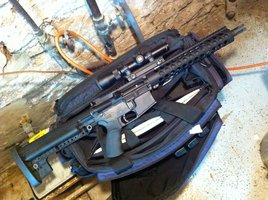 What in Christ's name is the current minimum length of a firearm in MA now?

Monday at 6:00 AM
Behind Enemy Lines