I just can't shake wanting a 41..
If you own one, do you have any gripes at all (besides the price tag)?
Do you prefer the 5.5" barrel or the 7"?
Any years of manufacture better / worse than others? Tips on buying used?

Seems like all the reviews I see are very positive, just curious if they actually live up to the hype or not.

Yup. Find one, keep it forever.
For me, the 5" heavy bbl is perfect.

i couldn't shoot mine to save my life but in the right hands...watch out. i had a 7". bought it to shoot in a pistol league in the early 80's. remember it working like a champ.

oddly, a few months ago a guy brought a vintage one up to harvard and was shooting one ragged hole rapid fire at 7 yards. a dime sized hole. it lives up to the hype for sure. don't know how good those guns coming out of the custom shop are though.

you find one for the right price you won't loose money.

Love mine, the only thing I didn't care for was the target style grips. I ended up swapping them out for a pair of 1911 style grips.

silversquirrel said:
Yup. Find one, keep it forever.
For me, the 5" heavy bbl is perfect.
Click to expand...

If one wanted to spend the extra money, buying a 7" barrel and swapping between that and the 5.5" when it suits your tastes, only takes a few seconds.

Got two, one in each length. Still trying to decide which I like better

They are nice target guns and usually as accurate as the person holding them. They can be finicky about ammo but that is true of most 22 pistols. I prefer a nice High-Standard Supermatic from the days when they were produced in Hamden CT. Sweet guns. Amazing triggers.

Location
In the Great Smoky Mountains

If you like 22 pistols it's a great one.
Found this one on Gunbroker in December for $750 I like the 5.5" barrel. Mine has the extendable front sight,which I like also. If you want to shoot a dot, get a Clark barrel.
Use CCI standard.

I bought a 5 @ 4seasons that was on the used page 1 day, drove about 50 miles, paid 5 even. Shoots better than me, wife loves it, would never sell it. Doesn't look as nice as the one above but I bought it to shoot not look at. There is nothing easier to clean.

I shot a Pardini on the league because I liked the feel of the gun. It had other quirks that bothered me but I lived with them and adapted. I was a 270's 280's shooter and in the top 10 slot for most of the years I was active. I sold it a few years ago when I left the club I was shooting at.

I also own a 41. 5.5 barrel w an Aimpoint. I bought it from a teammate and it was in mint condition. It's an older model and it always functions perfectly. I would never sell this gun. I don't have a need or want for a 7" barrel.

Both the above guns were fed nothing but RWS Target ammo. IMO running Hi Velocity ammo in a target gun is just dumb.

The only other gun that I would consider is an old Hi Standard Victor. I owned one years back that also had the .22 short conversion kit. Absolute tack driver in a young gunners hand who was more interested in the party and the strip clubs after the match. The newer Victor out of Texas (I think) was a POS.


My very first target .22 was a Hi Standard Citation 2. It was a good gun but better suited to shooting cans over NRA Gallery Match. With the slide mounted rear sight and the slide having some "slop" it was OK for a starting out shooter. I tried squeezing the slide tighter in a precision vice at work (machine shop) but it didn't work. When the Victor became available used, the 23 year old punk bought it.

My eye is on a Victor again but not sure If I'll do it.

I've got one with both the 5 1/5 and the 7 3/8 barrels. I shoot the longer barrel with open sights and a Ultra Dot on the shorter one.

Worth every penny. If I told you what I paid they would arrest me for being a thief.

Wow, they are running at about half of that over here, which ist still twice the going rate for an old style Walther GSP.

JuergenG said:
Wow, they are running at about half of that over here, which ist still twice the going rate for an old style Walther GSP.
Click to expand...

I have a friend in Norway who shoots one. The price he told me he pays for CCI standard velocity made me cry. Almost half what we pay. AND ItS MADE HERE!
B

Been shooting bullseye with my 41 for 5 years now. Moved up from a 1968 High Standard Olympic (.22 short) because ammo was getting super hard to find.
I am very happy with the 41. But it is picky about ammo. CCI sv is the only thing that I've found to be usable (accuracy wise) in the gun. If you can find one for a fair price - buy it.
B

I've got one with both barrels. In leagues where iron sights are required I shoot the 7". In leagues with electronics I shoot the short barrel. I'll keep it until someday when I get a Walther GSP.
J

The 41 is a nice gun if it works for you. The grip angle, for me, is not conducive to accurate (bullseye type) shooting. For (bullseye) I tend oto do better with a more aggressively angled grip, like you find on European competition pistols. I haven't shot bullseye in a while, but I'm planning on getting back into it to some degree, and will probably end up putting together a Ruger based pistol for that. That said, the 41 is a nice gun and does work well for many people.
M

I have a older model 7 3/8 with factory comp and weights. This is one of the few guns that just makes me feel like I have some skills. It just shoots well.
I have run just about everything through it.
Accuracy wise most of the "match" ammo does fine
CCI standard and Aquila extra super and wolf target do well enough with out spending a small fortune.

Short answer: yes definitely worth it.

I have the same model HiStd that IPSCDRL has, but with two barrels and slides. One is a 5" or so bull barrel; the other is a spacegun looking this with a comp on the end and adjustable weights. What is interesting about this second barrel is that the sight is on the barrel, not the slide like with the other barrel/slide set.

Thanks all, sounds like it is worth saving up for! I tracked a few lots on the RI auction but they were going for about 800 to 1k ea before premium. No deals there I guess.

PatMcD said:
I like the 5.5" barrel. Mine has the extendable front sight,which I like also. If you want to shoot a dot, get a Clark barrel.
Use CCI standard.

I have a Clark flat top bbl. With red dot, its quite fun on pins, spinners, etc. The chamber is super tight, to the point i called Clark to see about sending it back for some work. Failure to eject when it got dirty after a few mags of cci sv. The customer service gal said thats how they are designed. She said to put a drop of clp on the nose of the first round on each mag. Seems to work.
also fresh mag springs fixed a rare ftf.

Get one! You won't regret it
I have the 7", found it last month using slickguns; If you're anywhere near the Berkshires AJ's in Housatonic MA says he can usually get them in as well.
Avid Sports in Pittsfield had 2 used still in stock last I checked($$$$). One had the cocking indicator which as I believe means it's prior to 78, some argue those were the best years. I've had opportunity to shoot old and new, I can't tell a difference. I've shot CCI MiniMag,Federal AutoMatch and CCI Std Vel so far about 1000 rounds without a hitch on mine.

I've been shooting my #41 with a 5.5" barrel for about 10 years now. As others have mentioned, it can be a little finicky with regard to ammo. But, I use CCI standard Velocity (blue box) and it cycles very well. I use an Ultra-Dot Match Dot red dot and installed a pair of Dick Horton custom grips. It's one of the sweetest triggers you'll ever shoot for bull's eye. 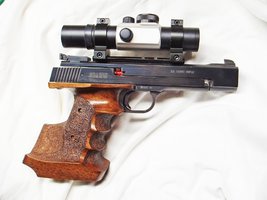 I just can't shake wanting a 41..
If you own one, do you have any gripes at all (besides the price tag)?
Click to expand...

My only tiny gripe is with the safety, I'd prefer if it were a bit bigger, but realistically I never use it.
I mostly plink with it at the range or in a sandpit, I never shot bullseye matches with it.

That's the one I have, never owned a 7", I have shot one, but I think the barrel profile looks a bit goofy and ruins the guns aesthetics.

Any years of manufacture better / worse than others? Tips on buying used?
Click to expand...

Yes, the older the better.
Mine was made in 1979 and has one of the finest triggers I've ever felt (S/N A590xxx)
The only one I've ever fired with a better trigger was older (S/N A491xxx)
I've also fired new production examples, and wasn't impressed.


silversquirrel said:
Yup. Find one, keep it forever.
For me, the 5" heavy bbl is perfect.
Click to expand...

Agreed.
I've had mine since 1984, it was the second handgun I ever purchased after getting my first LTC.
Paid $290 for it used. In 1986 I took it to the old Bay State Arms in Southboro and had it refinished in electroless nickel along with 2 mags. That cost a whopping $60, but was worth every penny, the finish has held up spectacularly over countless bricks of ammo. I have more rounds through this than any other gun I've ever owned, that includes rifles and shotguns. The only thing that ever needed to be replaced was an extractor claw, which I plain wore out. I still have all the original springs too. Also, take down for cleaning is about the easiest on the planet and new production magazines work with the S&W 422/622 series guns, of which I own several examples.

I was reading the specifications and it says "single action" -- looks like a semi-auto pistol to me.

Being a wheel-gun guy, I don't understand -- is there a hammer to pull back on this pistol ?

Here's mine with the extendable front sight: 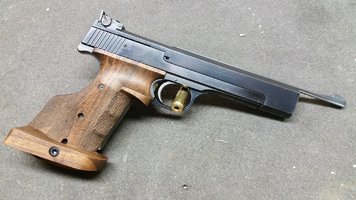 Gidge said:
I was reading the specifications and it says "single action" -- looks like a semi-auto pistol to me.

Being a wheel-gun guy, I don't understand -- is there a hammer to pull back on this pistol ?
Click to expand...

It's semi-auto with an internal hammer cocked by the slide, after you load a magazine you rack the slide to chamber the first round, doing so also cocks the hammer. so the trigger is always a sweet 2lb single action
Share:
Twitter Reddit Share Link