I just got back from signing nomination papers for Jay McMahon at a new (soon to open) shop in Stow, Great Road Firearms. Pete is not open yet but was happy to meet the girl friend and I so we could sign, he can be reached at 978-298-5401, website is still under construction www.greatroadfirearms.com. Looks like it will be a nice little place having a grand opening on March10.

I am very impressed with Jay Mcmahon's passion and would love to see him as our next AG. Please get out and sign nomination papers if you would like to get a solid 2A R on the ballot.

I signed for him at the Foxboro show. Bless his heart. 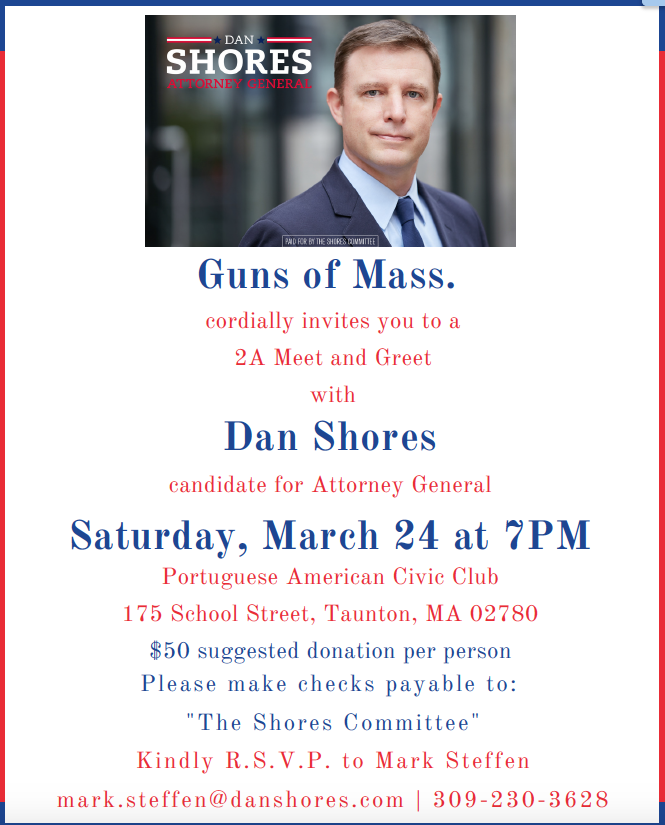 AM13 said:
Dan Shores is doing a 2A Meet and Greet at the PACC in Taunton on March 24th. I'm going to try to make it by
Click to expand...

I'm the Chairman of the Board of Directors at the Portuguese American Civic Club (PACC) on 175 School St. in Taunton. We're hoping for a very big turnout for Dan on March 24th. As a club we can't directly endorse any candidate but I can personally say I support Dan 100%, along with many of our members. He is a constitutional conservative, wants to take the politics out of the AG office and one of his first acts would be to remove the reinterpretation of the "Assault Weapons" ban here in MA.

I know people have their reservations about someone being able to compete in a race against tyrant Healey; but we have to remain diligent in our goal of raising money, creating a buzz of support and showing other politicians that we mean business in the gun community. Maybe we don't make a dent in the race, but just maybe we do. Maybe we start something for future elections, a groundswell of support and money can only help our efforts in the future.

We can't just say to ourselves "Nobody has a chance against her" or "What's the point?" What kind of way is that to think and act?

Jay McMahon is a gun guy, and I take nothing away from him and his campaign. But Dan is a gun guy himself and is by far the more electable candidate running. Remember it's not all about guns, their are many issues that we need addressed that affect all of us. To earn the trust of people and get their support you have to appeal to a larger part of the population to garner the needed votes. So join us on March 24th, visit Dan's page, donate and share with friends.

I don’t get the voting D for Gov. Wouldn’t it be more satisfying to write in something like Baker 2A Betrayer ?

Rekonn said:
I don’t get the voting D for Gov. Wouldn’t it be more satisfying to write in something like Baker 2A Betrayer ?
Click to expand...

The Dan Shores event at the Portuguese American Civic Club is tonight at 7 o'clock. It is being catered by award winning Kinfolk BBQ and Dan will be in attendance. Hope to see some NE Shooters come out tonight!

Location
N of the Rebublic. SE of Alba and W of Ling Ling

One can only hope...ill jump on his band wagon and see what he is about.

I did not know about Guns of Mass.

Who has a better chance, Jay McMahon or Dan Shores? If we really want R for AG, we need to pick one.
J

I spoke with jay at the Wilmington gun show I’m going with him.

crazymjb said:
I'll be voting against Healey -- but you guys need to realize its beyond D vs R here, she is beloved by most MA residents. I even know RINO Baker supporters who love her. These guys stand zero chance.

That's what lesbian privilege gets you these days... Credentials and ability be damned - she's a protected class so we must love her... else you're a baby killing racist, sexist, hate monger.

Just signed Jay’s papers an hour ago. Anyone but Healy.

"In the community, Governor Charles D. Baker appointed Dan to serve as a member of the Board of Trustees for Massachusetts Maritime Academy. In that role, Dan and other Trustees are responsible for overseeing the management of the Academy which has a multi-million dollar annual budget."

Did not know that but it solidifies my opinion that he was chosen by "Chuckles" to run against Jay McMahon as a favor to Maura.

commandcaddy said:
Attorney Jay McMahon from Bourne is running for AG and was the first to announce. I went to a fundraiser for him two weeks ago which was "packed ". He is extremely pro-gun and has declared he will undo Healy's AR15/AK47 guidance. I was at a couple of functions in 2014 when Shore was running for 9th District Congressman and listened to his stance on gun rights and McMahon is much more passionate. Shore seems very likeable but myself and friends down here are backing Jay.
Click to expand...

This post epitomizes the reason why we won’t get a rep AG. There is no strong support for one candidate.

PennyPincher said:
"In the community, Governor Charles D. Baker appointed Dan to serve as a member of the Board of Trustees for Massachusetts Maritime Academy. In that role, Dan and other Trustees are responsible for overseeing the management of the Academy which has a multi-million dollar annual budget."

Thanks for posting this, this is a good find. Anyone that associates with Baker or potentially owes him a favor that does not specifically denounce what he has done is dead to me. Jay it is. I also would not rule this out as an attempt to divide the vote as a favor to his buddy Maura.

Mattyweb said:
Thanks for posting this, this is a good find. Anyone that associates with Baker or potentially owes him a favor that does not specifically denounce what he has done is dead to me. Jay it is. I also would not rule this out as an attempt to divide the vote as a favor to his buddy Maura.
Click to expand...

He was appointed in Nov 2015 so this was likely "payback" for supporting Baker.

I'm going to truly miss not being able to vote against Healey......oh hell who am I kidding, I'm going to go buy the scariest AR I can find, just because.

I need to change my avatar.
P

I'm going with Jay McMahon. SOLID 2A. No BS.

Gave me the definition for what "shall not be infringed" was without a seconds hesitation. We had a great conversation after that.

As someone already mentioned, whether it's Jay or Dan, they need to have some sort of strategy in order to defeat MH. They need to be able to appeal to a larger audience than us gun folks in order to be successful. How that is... I really don't know.
P

One of Jay's big issues is the opiod issue. He had a son that was in the military, was injured, docs pumped him full of meds, got addicted, ultimately ended up without his son. Jay takes it pretty personal - was tough to hear him talk through the experience his son endured. So, he has spent a bunch of time working with doctors, counselors, addicts, to understand how opiods affect people, what isn't working - (what the State does now) - and how to actually really help people. He blames Healy for a big portion of that opiod mess, and is not shy about going after her on it. Could gain some traction there.
R

We'll be all set as long as we can hang on to a conservative republican governor like Charlie Baker. He'll rein in the renegade attorney general, and straighten out the state police, lower taxes, end corruption in the state house, curb illegal imigration, and protect our second ammendment rights.
Yup, that's what good old, salt of the earth, hardcore conservative, republican, straight shooting Charlie Baker will do for us.

Jay came to my club, his sons story was tough to hear, he’s got my support !

I’ll be doing what I can at both clubs I belong to, to pump up support for Jay.

Dan Shores campaign has reached out to me about having a table at Woburn Sportsmen's during the MA State IDPA Championship in June. I indicated that it was OK however I have not heard back with a positive commitment yet.

Very funny to hear these replies. My "opinion" and "likely this" that are truly without any merit at all.

I've met the man and his supporters on numerous occasions, I've heard his message in person. There is no doubt in my mind that Dan is the right candidate and as genuine as can be. We broke bread and had some private conversations in small groups on Saturday night in the 5 hours he spent with us. He's clearly stated; if he wins that is first act would be to throw out the reinterpretation ban. He's against sanctuary cities and MA as a sanctuary state. Wants to take on corruption and stop politicizing the office of AG. He's definitely not a Baker turncoat. I have no agenda here, I'm not beholden to anyone. Just speaking on my experience.

Jay McMahon, has very many similar views. Just not the same tact in which to express them. If you want to get someone who is in the middle or leaning the other way to come to our side; the manner in which you speak and get your message across has some bearing on that. He also has next to nothing raised in campaign funds and may not even be able to raise the $15,000 to speak at the convention. Dan is doing a fine job raising money and is a far better candidate if I may say so.

My only hope one day is that we can get on the same page as a community. Because if we did, we'd be a force to be reckoned with. We have strong numbers, a common objective but lack the organization to bring it all together.
Last edited: Mar 27, 2018
Share:
Twitter Reddit Share Link

A losing Republican candidate in N.M. is charged over shootings at homes of Democrats

M
FFL a SKS from New Hampshire to Massachusetts questions
2

Officials investigating after one dead, another injured, in double shooting at Massachusetts Dollar Tree
2