Ernie Shipman has a real nice shop in Gonic, NH. He is into SASS and can get most anything new. He got me a Colt Gold Cup the next day and for a good price.
19 Main St Gonic
335-4116
Seafarer

Another vote the Ernie / Renaissance!

Just did some business there - absolutely first rate. Great experience!!

Anyplace that has a lot of CAS stuff is OK in my book.

I'm going to have to see about going up there...

Thanks for all the positive reviews folks. We are really trying to be customer driven and keep our prices competitive. Also a belated welcome to the fine folks at Coyote Creek! If you ever have a problem or concern, contact me, Ernie, directly. My shop # is 603-994-GUNS (4867).

I was in the shop today. I didn't notice the sign but wasn't looking for it anyway. Would have ignored it if I did see it just like anywhere else. Regardless, I'd say this place is one of the best gun shops I've been to in a long time. I guess I've grown accustomed to the idea that gun shop owners are usually miserable a$$holes and curmudgeons who like to make you feel like you're a nuisance for being in their shop. Clerks are often borderline retards with nearly no knowledge about the wares they're peddling.

Not this place. Ernie is a great guy and was super helpful. He walked through a bunch of options with me, discussed everything and didn't rush me at all. Ended up making a decision in the rifle I'll buy and he's happy to order it for me. Prices seem competitive more or less. Even though he'll be on the road in the next few weeks he's offered to make himself available so he can order me what I want while he's away from the shop. You really can't ask for better customer service than that.

I find the sign thing funny. Sure, the wording wasn't awesome but it's kind of sad how fast we are sometimes to attack and dogpile on one of our own over a silly misunderstanding. Given the nitwits I've seen in various guns stores sweeping crowds of people with long guns and handguns alike, I can see why this policy might have seemed like a good idea at the time. IMO, the best solution would be to offer a secure "unloading area" like Four Seasons has. Either way, wanting to boycott a super shop and nice guy over a minor faux pas is just simply retarded.
N

I picked up 2 supressors there this week. Didn't notice "the sign". Everyone was friendly and very helpful, I will be doing more business there.

I didn't know about this place until they had the fire at their old location:

I finally got a chance to stop in at their NEW location last Friday, they're in a nice modern stand-alone building right on RT#125 in Rochester. It's easy to spot from the road as you're driving by, and they have nice a big parking lot.
They have a very good selection of firearms that runs the gamut from lever actions to NFA items, so there's something for everyone. Tons of AR's and some AK variants to choose from and lot's of handguns in several showcases. All the good stuff you'd expect to see from Glock, Kimber, Ruger, S&W etc, and even a few CZ's. They also had several of the newest model lever guns from Henry and Uberti as well as some sweet O/U and semi-auto shotguns from Beretta and Browning.
Then there's the room full of NFA items such as SBR's and suppressors, plenty of goodies to choose from, I checked out the new 9mm Kriss Vector which takes Glock mags. The only areas where inventory seemed a bit lacking were the ammo and the used guns, but otherwise it's worth stopping by if you're in the area. The prices seemed competitive with the other big shops and the clerks were very friendly, helpful and knowledgeable.
BTW, I did spot a pistol that called out to me "take me home" so I couldn't resist.

Great shop, I stop every time I am in the area, they are always very nice and I usually find something to take home, good selection of accessories too.

Wow, barely a peep about this place in nearly four years ???

I stopped in again today looking for a CZ-75 magazine.
They didn't have the mag I wanted, but they had a great selection of CZ's.
Large, medium, small and extra small. Nice!
I was really impressed with their selections of stuff, I drooled over a new production SIG P210,
(made in NH)
I tend to like oddball stuff, and they had this Browning Buckmark Target Rifle that looked really neat.
Looks a bit like a Man From Uncle creation. It felt awesome when I shouldered it in the store. 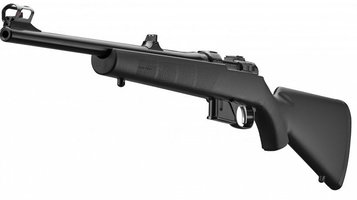 This is the version they have, the metalwork is excellent, but I'd rather have wood, and CZ has some nice wood.

If you like Henrys, they had some of those too, as well as a nice selection of Kimbers, Dan Wessons, AR's of many flavors, Bennelis, O/U's, Walthers and NFA stuff too.

As per my first review from 2016, the still don't have much of anything used, except for a few Contender barrels, but they didn't know if they were for G1or G2 models. I'll be back by that way in a few weeks, I'll bring one of my G1's by and see if the barrels fit.

Here's a pic of the shop owners pickup truck out front: 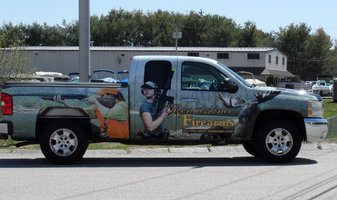 This is a really good shop, they have a modern upscale, almost boutique feel to them.
But the prices I saw looked reasonable for most items.
And they're not just in the high end of the market either, they have a nice selection of Heritage .22 revolvers for $145 and some other lesser expensive rifles and handguns.
If you make it by that way, it's really worth checking out.
They let me handle several guns, and they didn't even make me wear a face mask!
Last edited: May 14, 2020
You must log in or register to reply here.
Share:
Twitter Reddit Link