Well I could go buy a chassis system and drop it into that and be done. Or I could have purchased one of the PRS rifles being discussed in other threads. But hey, whats the fun in that.

I should have taken a before picture, but didn't. Before any changes the rifle was a basic Remington 700 ADL heavy barrel in a green SPS plastic stock that had a threaded barrel with a thread protector on it. The only picture I have with the rifle is in its original configuration was with it leaning against the buck I killed this year, and though it is a pretty picture with the snow and all, it seemed like bragging. (I assume you see what I did there).

But here is the after picture 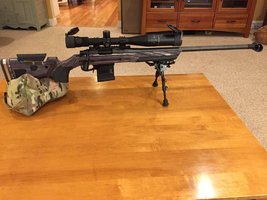 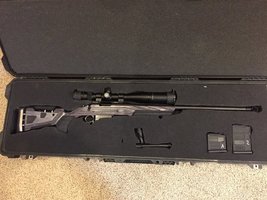 So the scope is the same one I used hunting. Vortex 6 - 16X with Mil dot reticle. The sun shade is because sometimes where I want to sit hunting (depending on wind and weather) I will be looking into the rising or more often the setting sun, and it helps. Also helps at the 300 yard line at Harvard SC

Before I changed anything else I added the JP "tank" Muzzle brake and took it to the range. I was surprised it had little impact on point of aim, but with no other changes it tamed the muzzle rise so I could see my impacts at 300 - 450 yards (at Granby).

The stock is Boyds AT-1 in Pepper laminate. The forearm and grip were upgraded to the over-molded target models.

The stock was drilled and pillared and inlet to use the PTG bottom metal for AICS mags. Five round mags for hunting, 10 for range.

Then as luck would have it, it fits in the Pelican case using the cut out for my 308 which is in an older Fajen stock. Having the same scope set up on both rifles helps.
Share:
Twitter Reddit Share Link