Pocket knife with blade 2.5” or less.

I had told my girlfriend to buy this since she wanted a smaller version of the Salt; that blade is comically small although still functional for plenty of everyday tasks.

Snora said:
I had told my girlfriend to buy this since she wanted a smaller version of the Salt; that blade is comically small although still functional for plenty of everyday tasks.
Click to expand...

I was surprised by just how much I liked having a small blade around. The mini tuff lite is almost a joke, until you realize it's like having a razor blade with a lockback and a decent handle.
R

Thanks all. Lots of good suggestions, one of them should do her fine.

Of course, I bought the serrated (Spyderedge) version.

The ARK — or "Always Ready Knife" — is a purpose-designed personal-defense knife with an extremely interesting history. The man behind the design is U.S. Army combat veteran John Shirley, who enlisted one month after the September 11th attacks and served his first tour as an infantryman. After completing his initial enlistment, being called back to active duty, earning two degrees, and becoming a commissioned officer, Shirley deployed to Afghanistan for the second time in 2011. During that tour, he served as the officer in charge of a joint-service team of non-commissioned officers who traveled in two-person teams to remote outposts throughout the country. In addition to the obvious threat of operating in a war zone, Shirley learned that forward-deployed troops faced other dangers as well, including the threat of sexual assault.

Although not widely publicized, an alarming number of U.S. personnel in Afghanistan were victims of sexual assault by foreign nationals and members of coalition forces. Many of these attacks took place in shower facilities, where soldiers were unarmed and often alone. Shirley, a long-time practitioner of the Japanese martial arts, was determined to keep his team members safe and set about designing a weapon that could literally be carried and used anywhere—even in the shower.

Shirley's vision was a small, lightweight neck knife that could be worn constantly and effectively drawn and employed even with wet, soapy hands. Since Shirley is not a knifemaker, he contacted his friend Sam Owens, a talented craftsman and specialist in historic preservation, and explained the concept to him. Owens immediately embraced the project and began crafting concept models and prototypes that he sent to Shirley to test and share with other forward-deployed personnel. Based on their feedback and the results of his testing, Shirley suggested refinements and Owens dutifully incorporated them into further prototypes.

During this process, Shirley also reached out to the knife community through Internet forums and managed to attract the attention of Spyderco's founder, Sal Glesser, with the idea. As Shirley and Owens dialed in the design, Glesser kept tabs on their progress and grew increasingly interested in the project's potential. Ultimately, Glesser and Spyderco formally embraced the project and the ARK was born.

Based on its intended purpose, the ARK needed to be small, lightweight, easily carried, and 100% rustproof. It also needed to provide an exceptionally secure grip and be easy to wield with minimal skills and training. With these criteria in mind, the heart of the ARK is its deeply curved clip-point blade ground from H1 steel—a nitrogen-based alloy that is completely immune to rust. The curved edge and deep hollow grind ensure exceptional edge geometry and pack as much edge length as possible into the compact blade. The clip profile lowers the blade tip closer to the knife's centerline for efficient energy transfer during a thrust and provides a strong, extremely sharp point.

Although original prototypes of the ARK had full tangs, textured G10 scales, and an index-finger groove, the grip they offered was still not adequate for use with wet, soapy hands. Spyderco therefore decided to invest in the tooling to mold a fiberglass-reinforced nylon (FRN) handle directly onto the blade's tang. An FRN handle allowed the use of Spyderco's proven Bi-Directional Texturing pattern, which provides unparalleled grip control even when wet.

To ensure convenient, universal carry with any style of clothing (including none at all) the logical choice was to equip the ARK with a neck sheath. After initial prototyping in Kydex, Spyderco designed an injection-molded polymer sheath that holds the knife securely when inverted, provides an exceptionally quick draw, and is completely immune to water and corrosion. The sheath is purposely wide to lay flat under clothing and keep the knife consistently oriented for a reliable, predictable draw. A rustproof breakaway ball chain easily supports the weight of the knife and resists the force of a rapid draw stroke, but cannot be turned against the wearer as a choking weapon like the paracord lanyards found on many neck knives. Best of all, the ARK and its sheath together weigh only 2 ounces (57 grams), so you'll hardly know it's there—until you need it.

Although the first-generation ARK sheath functioned well, to further increase retention during vigorous activity, Spyderco redesigned it to incorporate an integral retention tab. This tab keeps the knife locked in the sheath during carry, yet can be quickly released with the index finger to facilitate a rapid draw. For joggers and other folks with active lifestyles, this ensures that the ARK will stay securely in place while remaining quickly available when you need it most.

The ARK is a truly unique personal-defense tool that will surely find favor far beyond its intended audience. Shirley and Owens did an outstanding job of driving their vision forward and making it a reality and Spyderco is honored to be involved in this worthy project.
Specifications
It is quite small...

I've been very happy with my mini-butcher and min-impi from Andre de Villers. I've got a few of them in wood, MoP, and Abalone. He can make it with any scales you want.

A 2.5" blade is for whittling, cutting twine or cleaning your fingernails.
I'm a little different than most. If my employer's policy is a 2.5" blade... I'm going to ignore it, because if my 3.5" EDC is verboten,
then I won't get in anymore trouble with a snubnose .38 than I will with a slightly longer pocket knife...

I bought my wife the Kershaw Leek about 10 years ago. She carries it every day and uses it regularly. She prefers the straight profile of the cutting edge for normal daily tasks.
K

This looks painful to hold and or use. That whole thing looks like one giant “hot spot”.
K

Tinkermatic said:
This looks painful to hold and or use. That whole thing looks like one giant “hot spot”.
Click to expand...

I find it more comfortable and secure than most small knives. The width is a plus, and it doesn't look like a knife when closed.

Keeper said:
I find it more comfortable and secure than most small knives. The width is a plus, and it doesn't look like a knife when closed.
Click to expand...

I'd wrap that thing in paracord until it felt like an old-timey door knob...

Id ignord it and probably make a penis joke if i ever got my knife measure. I won't carry a blade under 3.4 in. I just can't get a good grip on little knives
R

Thanks again all. Daughter is complying with a “newly stressed” requirement at her place of work. Will let yuo all know final decision (kind of like final jeopardy I guess, will she like it, will she not....)

Be careful with buying the Bokers. I had one that I had an issue with, and found out when I wanted warranty work that it was a forgery.

I got a shitload of walmart $5 Ozark trail knives. I keep leaving them in stupid places. Basement, garage, under car seat....
Started doing that after TSA took my favorite sog. I thought I checked my backpack, but it has a tiny pocket at the small of the back. I left it there and went to the airport.
Now I lose them and I don't mind.

Is that a hollow grind?
Let me know when the sprint run drops in S35VN

Myerchin ef377 is the winner, the one hand easy open plus the marlin spike won outl thanks all.
B 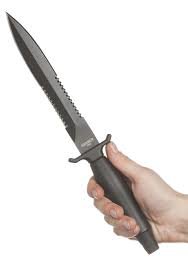 Qwikdraw45 said:
Be careful with buying the Bokers. I had one that I had an issue with, and found out when I wanted warranty work that it was a forgery.
Click to expand...

Be careful with buying anything purchased from Amazon.

Keeper said:
Be careful with buying anything purchased from Amazon.
Click to expand...

That knife I actually bought at a gun show from a reputable vendor. All the markings seemed legit. But, yeah, +1 on Amazon.

Tinkermatic said:
I was surprised by just how much I liked having a small blade around. The mini tuff lite is almost a joke, until you realize it's like having a razor blade with a lockback and a decent handle.
Click to expand...

I agree. I usually have a mini tuff lite for my Boston EDC, it does everything I need it to while I'm at my office. Some days I live on the edge and carry my mini griptilian.

Anyone carry a fixed-blade knife?
2

Get Ready to turn in your pocket Knife
2 3