nobody mentioned this that i saw, a shame. little feat guitarist paul barrere died at 71.

Paul Barrere, the singer-guitarist who was instrumental in keeping the group Little Feat going for decades after the death of founder Lowell George, has died at 71. Barrere died from the complicati… 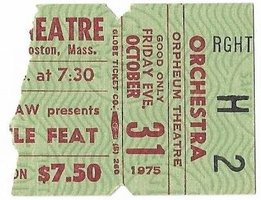 RIP Paul. Little Feat is one of my top 3 bands that I like listening to. I've seen Little Feat but not with Lowell George. Greencobra congrats on seeing Feat with Lowell.

Huge loss. What Big Red said. Always one of my favorites.

Here's a bit of Little Feat trivia that most people don't know.
Little Feat founders Lowell George and Roy Estrada both played with Frank Zappas band before they left to form their own group.
Roy Estrada was Zappas bass player / backup vocalist, and one of the original "Mothers" on all of Franks albums up until 1969, when he and Lowell George left to form Little Feat.
The name "Little Feat" was coined by Zappas drummer Jimmy Carl Black (the Indian of the group).
As JCB told it, one night while on tour, Lowell was in the hotel room with his shoes off and his feet up on the table.
Jimmy made a comment about how small his feet were, and the other band members teased him about it calling him "Little Feet".
Instead of getting mad, Lowell embraced the "Little Feet" moniker and used it as the name for the new band, only altering the spelling to change the connotation to mean "Small Accomplishment".
You must log in or register to reply here.
Share:
Twitter Reddit Link

Bozo won't be down for any more jokes....

Artie Van won't be knocking over any more banks...