NHKevin said:
NRA has been bad for NH also.
Click to expand...

The Friend's groups have donated a lot of money to local clubs. My home club has received thousands in grants for programs and equipment. Years back we received a range grant to improve the walkways and shooting areas of the ranges.

The problem is that the ILA has pulled resources from the NRA itself. time to clean up their act.

Acujeff said:
The NRA's purpose and effectiveness is bigger than LaPierre. Democrats are attacking now to cancel the NRA's political influence. Supporting these attacks right now is not in the best interests of gun owners.

If you don’t want to support the NRA administration, then designate your contributions exclusively to the NRA Institute for Legislative Action and the Political Victory Fund.

I support GOAL with as much as I can muster each year. It would not seem like a good idea to continue to send money to an organization that has now admitted funds were misappropriated and still has the same Board and Administration in place. Why would we think that with that same team in place, just because we designate funds for a specific purpose, they would be spent for that purpose?

This could be cured if the NRA stopped telling people how to vote in its annual election. 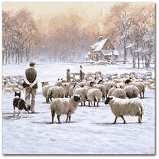 Location
the other side of the state

MaverickNH said:
"...divided we fall." Never been truer than today.
Click to expand...

like it or not the NRA is the only national group that is well known and with that carries weight, the other groups as well intentioned as they may be are like specs of dust..... hopefully the NRA makes some changes, but with everything going on with the senate I can't see it being a solid move to abandon them now.

Government facilitated the fragmentation of UK gun owner groups in the mid- to late-20th century, to then sequentially isolate and all but eliminate handguns, semi-automatic rifles, semi-automatic shotguns, bolt-action rifles, pump shotguns and break-open shotguns. Then air guns. All by going after each smaller segment, one at a time. 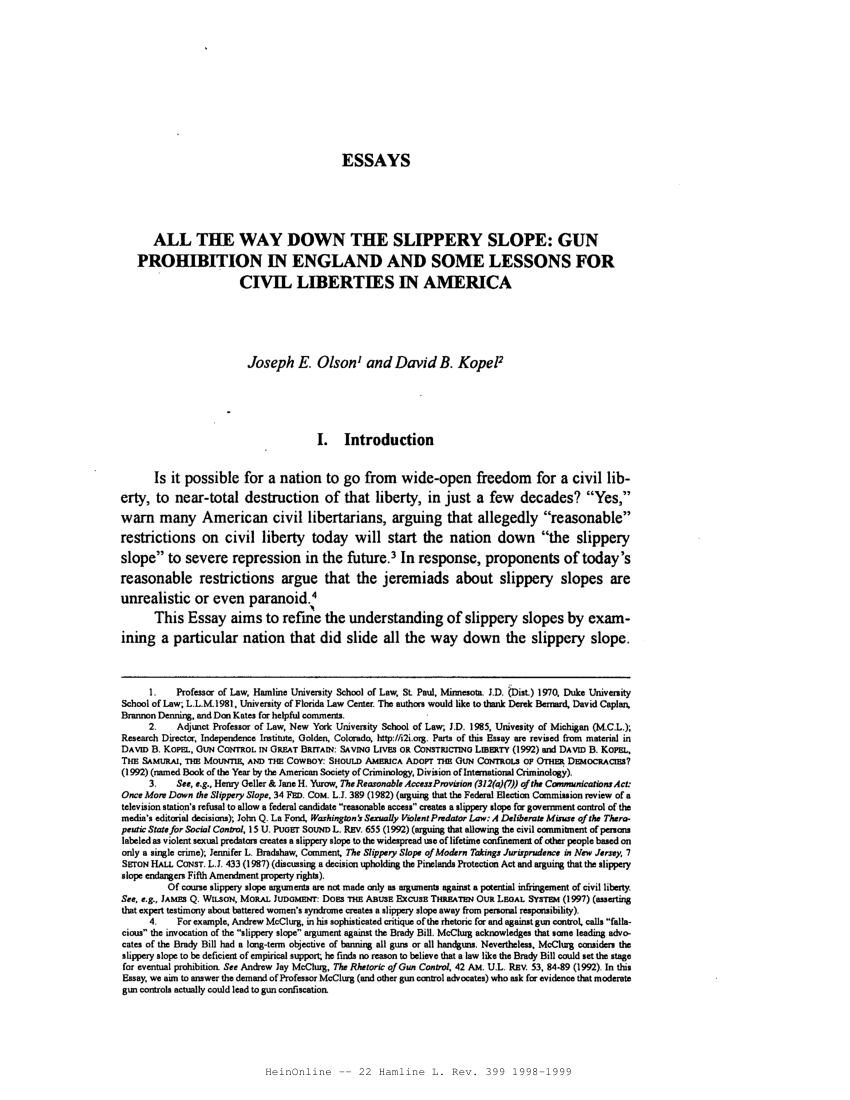 (PDF) All the Way Down the Slippery Slope: Gun Prohibition in England and Some Lessons for Civil Liberties in America

PDF | Whenever civil liberties issues are contested, proponents of greater restrictions often chide civil liberties defenders for being unwilling to... | Find, read and cite all the research you need on ResearchGate

Acujeff said:
How soon you forget the handgun confiscation initiative on the statewide ballot in Massachusetts in 1976.

It was proposed that authorities confiscate all handguns in the state, including BB guns. Gun owners would have six months to surrender their firearms, after which they would face a mandatory year in prison for owning a handgun.

The confiscation law seemed poised to pass. The most liberal state in the nation, Massachusetts--along with the District of Columbia--was the only place that had given its electoral votes to Democratic presidential candidate George McGovern in 1972. (McGovern had run on a platform calling for a national ban on all handguns considered "unsuitable for sporting purposes.")

Most of the Massachusetts media strongly supported a handgun ban. The Boston Globe, whose reach extends throughout the relatively small state, vehemently opposed handgun ownership. So did the television stations in Boston.

Read how the NRA defeated it:

Good read, thank you for the link.
G

I still don't understand why they would have set up in New York of all places. You would also think that they would make sure all the I's are dotted and t's crossed. They just got away with bad sh*t for so long they obviously never thought they would get caught and this was business as usual.

When our side cedes territory without gaining any (compromise would, for example, getting national shall issue/reciprocity in return for universal background checks - an no, that observation is not a comment on the merits of such a deal)

Get something into place for long enough, and you can change the public thinking. It is not just a battle for legislation, but a long term strategy of adjusting the social norm.

- It is now "unthinkable" that the Hughes Amendment (passed under a questionable voice vote) would ever be reversed since it is now "obvious" unimportant people should not own select fire weapons.

- It is "obvious" that felons should not be allowed to own firearms - even if the felony was digging a dino fossil on federal land or lying on a mortgage application.

- Most other countries have moved the concept of an unimportant person owning a firearm for the purpose of personal defense outside of the Overton window. Argue for defensive use of a handgun in Canada or Australia and you'll be taken as seriously as someone advocating sex with pre-teens be legalized.

- The current project is working to make ownership of EBRs and normal magazines "unthinkable" and outside the stream of "what any reasonable person would think".

Changing thinking works two ways. A couple of decades or so ago, it was unthinkable that ordinary people could be armed in public as chaos would certainly reign. "Shall issue" reform, combined with the experience of not much happening, has largely changed that perception.

What was once either banned of the purview of an elite few outside of LE is now available to ordinary, unconnected and unimportant people in most of the country. Although there have been some losses trying to expand shall issue, I do not know of any states that have rolled back shall issue.
Last edited: Nov 27, 2020

Rob Boudrie said:
Get something into place for long enough, and you can change the public thinking. It is not just a battle for legislation, but a long term strategy of adjusting the social norm.
...
- It is "obvious" that felons should not be allowed to own firearm - even if the felony was digging a dino fossil on federal land or lying on a mortgage application.
Click to expand...

25-Nov'20: Jonathan Turley: Barrett Reloaded? A New Third Circuit Decision Could Prove The Perfect Base For A Second Amendment Blowout


... the 2-1 decision ... that a non-violent tax conviction can result in the denial of gun ownership, ... concerns Lisa Folajtar who was denied the right to own a firearm. The reason was her pleading guilty in 2011 to willfully making a materially false statement on her tax returns. The plea led to a sentence of three-years’ probation, including three months of home confinement, a $10,000 fine, and a $100 assessment. She also paid the IRS over $250,000 in back taxes, penalties, and interest.​
...​
Hat tip: Glenn "Instapundit" Reynolds

Not holding my breath, but FYI.


Rob Boudrie said:
Argue for defensive use of a handgun in Canada or Australia and you'll be taken as less seriously as than someone advocating sex with pre-teens be legalized.
Click to expand...

FTFY.
At least for Canada.
(But can Australia be far behind?)

general disorder said:
I still don't understand why they would have set up in New York of all places.
Click to expand...

Maybe because it was "set up in New York" in 1871, and that's where both founders lived? Maybe?

As for why they have stayed in NY for the last 30+ years, that's a good question.

KBCraig said:
Maybe because it was "set up in New York" in 1871, and that's where both founders lived? Maybe?

As for why they have stayed in NY for the last 30+ years, that's a good question.
Click to expand...

Organizational inertia -- the bigger an organization gets, the more difficult it becomes to "move" your state of incorporation (redomestication)
R

We have a hard enough time consolidating members of the shooting community to take action. The last thing we need is to lose a household name like the NRA for some other acronym no one knows. The leadership must go, I will not deny that, but the NRA must survive this challenge.
G

Kevin_NH said:
Organizational inertia -- the bigger an organization gets, the more difficult it becomes to "move" your state of incorporation (redomestication)
Click to expand...

that makes sense for NRA but why did they incorporate the NRA Foundation in Washington DC in 1990?

f*** the NRA. Here are some federal level organizations that are actually worth giving to. FPC especially. They're involved in lots of lawsuits right now.

The top if the NRA absolutely has to go. This has become a joke of an organization especially at a time that were going to need them most. I get that they set up in NY originally but what we have seen in say at least in the last 20yrs is that liberals' in blue states don't let stuff like laws and rules get in the way of their agenda. They need to stay at least in the area. Weather we like it or not most things in this country goes through DC and or NY. They should have moved to northern Virginia. This way there not to far from the action and they have a shot to not get steamrolled like they would in a strait blue state. Yes I realize that VA is essentially going or gone blue its not NY blue. I really hope they can get themselves un screwed in a hurry although I'm not optimistic.

I hope they clean up their act. I am a member and I think others should join. But I also think there a bunch of other organizations to join. I join as many as possible. Plus with the nra you get that crappy hat nobody wears.

Rumors and speculation about Wayne being dirty brought the attention of investigators to the NRA. Everyone knew he was dirty so that's where they started. From there they focused on the organization, but he opened the door to them. He gave them the excuse, so they just expanded their focus into political gains.
He has to go, but the board (his cronies) need to push him out because he won't retire. Good luck with that.
The NRA was/is valuable but it needs to get back to it's original purpose and stop being Waynes piggie bank.
T

Golddiggie said:
I've been trying to decide if I should renew my membership or not. Last magazine will be the January 2021 issue. So not much time left. With all the BS over the past couple of years, I'm leaning towards "nope". I'll donate, or join, another org that has a cleaner record at this point. There are at least a few good ones out there.
Click to expand...

I would like to say, as much as I hate the NRA, that so long as the two GOPs win in GA, to send NRA the money. If only one of them wins or neither do, forget it, take that money and buy ammo or some body armor because the Donks and their Antifa and BLM fellow travelers...

I was a member of the Texas State Rifle Association before I learned what Chas. A. Cotton, Esq., was up to by way of political shenanigans, I shook that dust from my feet. Cotton was the WLP of Texas: fought like hell against any gun freedom that wasn't his idea, and if it passed anyway, he claimed it was all his idea.

After learning that Cotton was the head of the audit committee that found absolutely no wrongdoing in NRA finances, I literally LOL'd.

If he even has a law license after all of this is over, I'll take some pleasure knowing that he's pursuing personal injury cases for traffic accidents in Houston.

Ex-NRA insider speaks out: Gun owners should be 'horrified' by what I saw
2