Lack of shooter description indicates this story does not fit the narrative.

2 wounded in shooting at New Hampshire church during wedding

Too early for a shotgun wedding joke?

Sounds like a all black church, so this one won't count.

Nobody was carrying? In NH? Must all be from Mass.

Jealous ex who objected to the wedding?

Location
Rutland , in the oppressive Republic of Massachuse

It is really hard for me to believe that there is an African American church in NH.
Sounds like fake news.

appraiser said:
The Bishop that was performing the ceremony was one of the people shot
Click to expand...

Would make sense if someone were trying to shoot the bride or groom.

shootymacshootface said:
It is really hard for me to believe that there is an African American church in NH.
Sounds like fake news.
Click to expand... 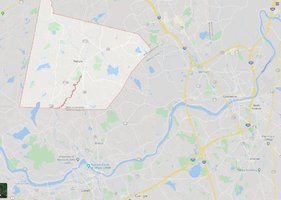 shootymacshootface said:
It is really hard for me to believe that there is an African American church in NH.
Sounds like fake news.
Click to expand...

I've driven by it hundreds of times, but never knew it was.

I figured it was the damn Hare Krishna's

Since I live there, I can tell you with all certainty , the church where this happened has a predominately Black congregation.
M

appraiser said:
The Bishop that was performing the ceremony was one of the people shot
Click to expand...

You're not supposed to bop the Bishop in church!

What's so unusual about the possibility of an all-black church, particularly within a stone's throw of the Mass. border?

Subject: Arrest Made in the Shooting at the New England Pentecostal Church in Pelham, New Hampshire

Around 10:12am this morning, Saturday, October 12, 2019, Pelham police officers responded to a reported shooting at the New England Pentecostal Church at 955 Bridge Street in Pelham. A 91-1 call was made from the church in which a wedding service was taking place. The caller reported that a man came in and shot at the presiding bishop. Within moments, nearby officers were on scene and immediately entered the church. Upon arrival, officers discovered Bishop Choate suffering from a gunshot wound to the upper chest. Officers also discovered a number of parishioners pinning Dale Halloway down on the ground.

Bishop Choate is currently receiving treatment at Tufts Medical Center in Boston, Massachusetts. He is listed in serious condition.

At this time, Mr. Halloway has been arrested on alternative counts of purposely and knowingly causing bodily injury by means of a deadly weapon by shooting Bishop Choate in the chest.

Mr. Halloway is being held awaiting arraignment. His arraignment is anticipated to be scheduled for Tuesday, October 15, 2019 at 1:00 p.m. in Hillsborough County Superior Court – Southern District in Nashua.

The New Hampshire State Police and Pelham Police Department are continuing to investigate this crime. Preliminary investigation of the matter indicates that this incident does not appear to

be a random event. Anyone with information is encouraged the Sergeant Kelly Healey at the New Hampshire State Police Major Crime Unit at the following phone number: 603-MCU-TIPS (603-628-8477).

Furthermore, church services scheduled for Sunday October 13, 2019 at the church have been cancelled. Crisis counselors will be available tomorrow for anyone in the Pelham community or the New England Pentecostal Church community at Sherburne Hall community center tomorrow from 12:00 p.m. to 5:00 p.m. Anyone who would talk one-on-one with a counselor is encouraged to attend.

The charges and allegations are merely accusations, and the defendant is presumed innocent unless and until proven guilty
W

Blackmore said:
What's so unusual about the possibility of an all-black church, particularly within a stone's throw of the Mass. border?
Click to expand...

Relax, it's a joke on a commonly held belief about NH.

New Hampshire, 94 Percent White, Asks: How Do You Diversify a Whole State?

The Groom was not shot, but was hit on the head, his SON was the one who killed the Minister of the church recently..... WTF

The Bride to be was shot in the arm, the Bishop has a chest wound and is in serious condition

appraiser said:
The Groom was not shot, but was hit on the head, his SON was the one who killed the Minister of the church recently..... WTF

The Bride to be was shot in the arm, the Bishop has a chest wound and is in serious condition

Not exactly what was said at the press conference. But this is fun, it's like a game of telephone.

UPDATE: New Hampshire wedding shooting, murder of church pastor may be related
Police identified the suspect as Dale Halloway, 37, who was “gang-tackled” by guests at the wedding after he shot Bishop Stanley Choate, 75, and Clare McMullen, 60. Groom Mark Castiglione was hit in the head by an object during the shooting, according to the Eagle-Tribune.

Castiglione is the father of Brandon Castiglione, 24, who has been arrested and charged with second degree murder in the shooting death of Luis Garcia, another pastor at New England Pentecostal Ministries.

Roark said the shooter arrived after the wedding began shortly after 10 a.m. and used a handgun. The church had recently undergone active shooter training, he added.

The Union-Leader reported that church member Janail Archer told the paper that she had spoken with her father, Othniel Archer, a deacon at the church who was there at the time of the shooting. She said her father told her he saw a man in a hoodie enter the church from his vantage point in a balcony used for videotaping. The man walked to the pulpit, Archer told his daughter, and shot Choate and McMullen.
M

appraiser said:
I think New York City has enough of its own problems that they don't have to worry about a little town of 12,000 in New Hampshire. We are a state with constitutional carry and no nanny state gun laws and we have less shootings in a year than New York City has in a day
Click to expand...

Plus a lot less black people.

wiryone1 said:
I want to know why the NYPD Counterterrorism Unit thinks they need to monitor this. The BS/propaganda hairs on the back of my neck began to stand up when I read that.
Click to expand...

Bloomberg most likely ordered this. So he can use the info for further bans.

Len-2A Training said:
Bloomberg most likely ordered this. So he can use the info for further bans.
Click to expand...

Every time I read "gang tackle"...

appraiser said:
tip411 - Alerts
....Within moments, nearby officers were on scene and immediately entered the church....
Click to expand...

What the hell is that supposed to mean?
M

What the hell is that supposed to mean?
Click to expand...

Hopefully in this instance, the police took several moments to allow ample time for the people that took the shooter down to beat the bag out of him.

The murder on Oct. 2 in Londonderry (see post #10, if you haven't read the entire thread or don't know what I'm talking about) and this crime do seem related, so this makes sense:

In an obituary for Garcia, Dale Holloway was listed as a stepson. But police have not revealed the connection between the two families, or whether the man arrested in Saturday's attack is related to Garcia.
Click to expand...

I have not seen that key detail reported anywhere else. As usual, one must go overseas to get the most complete reporting: Bride and bishop are shot by a gunman during ceremony at New Hampshire church | Daily Mail Online

So far all reporting on this case is like forecasting weather in the New England. It changes hourly.
Simple fact that media calls it "church shooting" is enough to get libs excited for years to come.

Tit for tat. Clear as day to me. Family feud in the house of the lord...
W

I think my favorite part of the press conference where they spend five minutes thanking and congratulating all the police, FBI and law enforcement. I guess they feel the need to take credit for allowing the citizens to stop the threat.
Share:
Twitter Reddit Share Link