Thursday was a tough day for me, was running on 4 hours of sleep and the scores reflected that.

I didn't place that day but my friend Tim Steed did in Handicap for his yardage. I tied for Doubles with two other people, the outcome would be decided on the next Doubles event the next day. 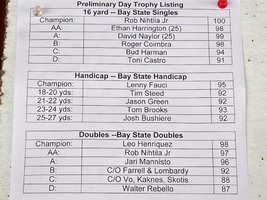 Friday was better for me, got a full nights sleep and won my Class B with a 98. Just missing what would have been my 2nd 100 straight by 2.

Doubles - I didn't do that great - Ended up with an 87 - I beat Kaknes (80) but Skotis spanked me with a 93 I believe. He would end up winning Friday's Doubles and Thursday's Doubles placing for both in my Class C. - That one bird the day before would have sealed the deal for me. 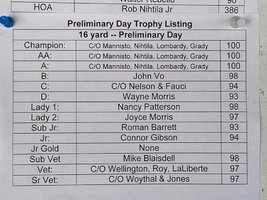 First 100 - Got a 93, not great by my standards since I was shooting against very good shooters but you never know.
Second 100 - Got a 97, better than my first set but I felt the damage was already done. I can only HOPE to get lucky at this point. Again, missed what would have been my 2nd 100 straight by 3.

Total score was 190 - Another Non-Resident Shooter scored a 194. They always tell you that every bird counts and for sure the 4 did. = )

Always a pleasure shooting in these events against really good shooters. Gives me something to work towards and improve on. Till the next event! Take care and hopefully I'll see you out there.
Share:
Twitter Reddit Share Link