About 2 weeks ago I was doing a little bit of housekeeping in my shop. Tucked in the back of a cabinet I found a dusty and long forgotten Lee turret press. Not the Classic model, but the cheap aluminum one. This was my first press way back when and I loaded a boatload of ammo with it. As I accumulated more and better stuff it was relegated to that cabinet and forgotten. I decided to clean it up and put it back in operation as an already set up designated press for .45 Colt. In the process it occurred to me that a review with fresh eyes could be useful to others, especially to someone new looking to get into reloading as economically as possible. So here goes…..

The press itself is light and feels cheap. I think the classic model is sturdier, but having said that the frame, handle and ram work as well as they did when it was new. I am not sure how massively sturdy a press needs to be for regular reloading. The turret is self indexing which is kind of cool. However, the indexing is created by a small square ratchet washer which is made of plastic and fits inside a plastic auto index clamp which is also plastic. My old press would not index properly any more, however for the princely sum of $6.50 I replaced both parts. The press now indexes perfectly and I bought 4 extra square ratchets for $2.00 total, just in case. If all else fails the indexing feature can be easily removed and it can be manually indexed (just like my far more costly Lyman turret).

Priming system: The hand fed priming arms might be the best of any press I have ever used. It just fits into the ram on a notch and swings out on the upstroke, a primer is placed in the cup and the primer arm swings in automatically on the downstroke for seating. Switching from large to small literally takes 1 second. This priming system is superior to either my Lyman turret or Rockchucker single stage. The addition of a Safety Primer speeds up the priming process significantly and despite feeling like cheap plastic mine has stood up to a lot of use. The large and small safety primer can be replaced for $30.00.

Powder Feed: The Lee auto disc powder dispenser fits into the top of the Lee powder through die (note: an extension is needed to function with the safety prime). This means that flaring the case neck and powder drop happen in the same step. The downside of the Lee auto disc is that it is difficult if not impossible to get every .1 grain increment and the chart for matching up the hole size with a particular powder weight is approximate at best. On the .45 Colt for example I wanted a 5 gr. charge of Trailboss and the closest I could get was 5.2 grs. However as an experiment I threw 50 straight charges in a row to test accuracy and every single one was dead on at 5.2 grs. So this powder dispenser may not be a perfect choice for precision powder charging, but actually which dispenser is? Also the auto disc is best suited for handgun calibers as double discs are required for most rifle charges.

The bottom line is that I believe this much maligned press could be a decent choice for some individuals. The sturdier Lee Classic Turret Press Kit sells for about $200. It includes the press, auto disc powder measure, safety prime, a scale and some case prep tools. Add a set of Lee dies and the components and one is ready to start making ammo. Best suited for loading handgun, it is faster than a single stage, but slower than a progressive. It is probably not the best choice for someone who either shoots a real lot or a lot of multiple calibers. Still for the moderate plinker who wants to try reloading it could be a viable set up. Just be prepared to replace some parts at some point.

I have a Lee Classic 4-hole turret press and believe it or not - I like it. I'm going to write up a review for it in an upcoming issue of the GOAL news.

I have one that has, and still sees a lot of use. The indexing ratchet is the weak link, but easily repaired when needed. I too keep extras on hand.

I'm using the same one.
I've also had to replace the indexing feature when it wore out and didn't rotate a full 90° each time. Also had to replace the powder hopper for the autodisk when the (plastic) threads wore out after several years... they're like $3/each so I got two spares. I use the autodisk doubler for a slightly finer level of granularity for adjusting charge weight, which I recommend. I use an off-press Perfect Power Measure for rifle cartridges.

I have a Lee classic 4 hole turret and like it a lot. I keep spare square plastic washers that seen to act like a sacrificial part on the auto indexing mechanism threaded on the square auto indexing rod. I also just bought and used the Lee auto drum powder measure, I'm very pleased so far.
M

Lee is what it is. Many of thier products work and for a lot of shooters Lee made reloading available to lots of shooters who can't afford the more expensive stuff.
I bought a Lee pro 1000 few months ago and once I fixed a few minor issues it cranked out 2000 plus 30 carbine and 2000 223 with out much issue.
Lee takes a certain level of " I know it will need tinkering" mind set. If your completely good of any mechanical skill don't reload. 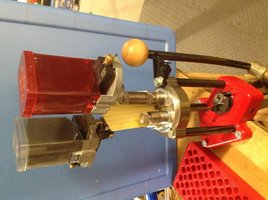 I crank out 223 on a 4 hole setup with two drops and two seating dies. I use the adjustable powder bars, not the discs. With judicious use of a Dremel, you can squeak up to 27gr per throw from the adjustable bars. Stock I think it was more like 23ish which was just outside my loads and I didn't want to throw double loads.

I have a Lee Classic Single Stage Press that I use often for ammo tear down, brass processing, and even some loading still. Best $29.00 I ever spent. When it came time to get a Turret Press, I went with a Redding T-7. The thing is built like it should be mounted on an M1 Abrahms Tank. The Lee Turret Press just didn't impress me as a long term tool.
M

I didn't feel like switching over to my hornady to load up some test ammo for a up coming cmp match.
So I decided to run a test load on the pro1000. ..quick seating/powder adjustment good to go.
I have the pro1000 with auto drum. The new and improved auto disc works a lot better than the old. Only leaked about 2-3 grains of W296 over a 2000 round run. If I used the old auto disc I would have lost about 4 grains for every 10 rounds.
The auto drum works well. I measure 30 drops and it held +/- .1 grain with 8208xbr .2 on the varget powder.
Last edited: Apr 4, 2016
B

i just started reloading in the last few weeks and I also picked up a Lee Classic Turret Press after endless research and reviews. A single stage seemed to slow and a progressive at this stage of the game was to expensive and unnecessary. I did picked up 4 hole setups for 9mm, 40 S&W and 357 SIG, eventually I'll do 45ACP. At first I was concentrating on 9mm and had it set up as a single stage to understand and review each reloading step. Now I can operate the press with all stages set and knock out 150 an hour with load checks every 10. I'll continue reading anything and everything I can find about 9mm load combinations and specs to fine tune loads for IDPA. I can tell after a few weeks of loading each night this Lee Classic Turret Press is going to work out just fine for handgun loads. For first timers I can't recommend this press enough, great value.
Share:
Twitter Reddit Share Link