LCpl Carpenter approved for the Medal of Honor

MoH for Marine Wounded In Afghanistan

Spokespersons for the Marine Corps and the White House would not confirm the status of Carpenter's case to Stars and Stripes, pending a potential White House announcement.
Carpenter, 24, would be the 10th U.S. service member -- and the second Marine -- to receive the Medal of Honor from the war in Afghanistan.

Carpenter was nominated for the nation's highest award for valor following reports that he covered a grenade to save the life of his friend, Lance Cpl. Nicholas Eufrazio, during an insurgent attack in the Marjah district of Helmand province as the two Marines were standing guard on a rooftop on Nov. 21, 2010. Carpenter and Eufrazio survived the blast, but suffered severe wounds. Carpenter lost an eye and most of his teeth and shattered his jaw; his arm was also broken in several places.
Click to expand... 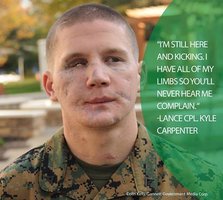 Look closely - his prosthetic right eye has an image in it!

i never heard of this hero...but i had the chills just reading about what he did and watching the video...Kinda speechless now on his actions and bravery

I couldnt tell what the image is in his eye tho..what was it

Thank you for your service Marine.

Anyone think for a second a guy like Barry appreciates this Marines service? or ANY member of the Military? In 50 yrs another Liberal idiot like him will put barbed wire around his memorial to keep him from seeing it before he dies.

Appears to be a Purple Heart Medal image.

Location
Only In Maynard

Semper Fi Cpl. Kyle Carpenter. You showed them how a real Marine Marines.
Thank you for your service.

Got the chills watching and listening to that. True hero, Thank You for your service.

Nine years ago today:
(The MOH event, not the podcast.)

Andy in NH said:
Nine years ago today:
(The MOH event, not the podcast.)

Young men like this still fill me with hope for the fate of our country.

He has a new book out. I saw an interview or podcast with him recently; I thought it was Joe Rogan but cant find it...

Today is the anniversary of Kyle Carpenter's MOH action.

Andy in NH said:
Today is the anniversary of Kyle Carpenter's MOH action.

If you've never seen an interview with this young man, you are missing out.

Is there a list of lost servicemen by state from the attack on Pearl Harbor somewhere?

R
The military needs to change this.
2

D-Day - Through the eyes of a Paratrooper

Advice for donating to veterans