Amusing survey being conducted by eggheads at the FIU of the northeast. Let's show them some real answers: https://harvard.az1.qualtrics.com/jfe/form/SV_2bqzY7kpMaJmdtH

That link traces back to you.

They will know all people who click on it have come from that link.

Do you have more info on this survey besides that link?

When articles and links have random looking digits at the end, those are tracking devices. Websites use that info to follow how links get spread and who spreads or visits the link.

When they discover that link was on NES, they will use that in their analysis.

It's kind of like how people post links to help them win contests. When a link is posted to friends, the website can tell that all those people are not regular contest voters.

Can you copy and paste everything BUT those last random digits to mask your origin?
F

Thanks for the heads-up. Tried to remove the random characters but it broke the link. I'll have to find my source and check it out.

Well, I did follow the link that traces back to you and did respond. You are now a freedom-hating gun grabber ;-P

But seriously, it did seem to accept my input just fine; would be interested to know if part of the purpose of this survey is to trace the propagation of the survey links among the population.

I tried to do a Google search on Harvard Gun Control Surveys and this was the most recent closest paper I could find (and it probably is not what the OP was trying to reference):

Do Researchers From Different Fields Have a Consensus on Gun Control Laws and Do Registered Voters Agree With Any of Them?

Hundreds of millions of dollars go to firearms research on crime, suicides, and accidental deaths, but the vast majority of the money, particularly government m
papers.ssrn.com

added: after seeing neum69's post I took the plunge also.

Did it. Interesting exercise. 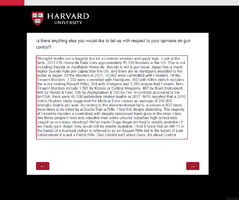 I answered that last question as follows: molon labe.

If you do a little googling you will find that the research group that does these surveys are majorly funded by 3 anti-gun groups. Their results are always going to please their donors or they’re gonna lose funding.

Location
Other side of the bridges behind the iron curtain

Curious question: if you’re running a VPN is the link traced back to you?

Gun control does nothing to decrease violent crimes or mortality - it only changes the method by which evil people kill others. It does, however, decrease the ability of victims to defend themselves.
Click to expand...

My reply on the last page was:
"I'm assuming that 100 was fully agree and 1 was fully disagree. A survey asking me to rate something on a scale of 1 to 100 that lacks the words, "Where 1 is X and 100 is Y" is going to confuse the snot out of survey takes and return useless results."

Koolmoose said:
Curious question: if you’re running a VPN is the link traced back to you?
Click to expand...

Yes and no. It's not traced to your IP but the connection is made that your opinions are likely associated with OP's.

The anti-gunners have actually observed that pro-gun folks write their legislators more, donate more money and attend more events in support of the 2ndA than do those who oppose guns. Bloomberg responded by creating Everytown and adopting Moms Demand Action, to be One-Man money/media mill. They created the March for Our Lives movement with money & media as well.

This survey is very likely an effort to use our tendency to respond beyond mere Friend/Like clicks against us by creating a self-selected pool of pro-2ndA respondents for future survey use. These "gun violence research centers" take $$$ from Bloomberg, Soros, etc., laundered for academic purity through foundations (Joyce, MacArthur, etc.) with avowed anti-gun agendas, to pump tons of *research* out while decrying the lack of federal funding for gun research.

Harvard's lead researcher Hemenway has been publishing for decades https://www.hsph.harvard.edu/hicrc/ with 100+ papers since 1992 - twice that number from his underlings. They do a survey and crank papers out for years. Many papers from students and residents are so poor that editors send them to me for rejection so other academics don't have to sully their hands.

I signed up for the survey system - why not? We're damned if we do or don't. The top schools might suppress and obfuscate outcomes that don't fit their narrative but they don't out-and-out lie like the no-name schools - they have a reputation. In science, if you have a hypothesis about how this causes that, you do a study and if this *doesn't* cause that its called "negative findings" and is usually not publishable - anyone can come up with a BS hypothesis and be wrong so who cares?

In the anti-gun research space, I've seen the term "negative findings" used when the study doesn't indict guns. No anti-gun conclusions means no publication, no funding. But with the advent of virtual medical journals - no print copy sent out monthly as the official journal of some actual dues-paying biomedical researchers that have meetings, committees, etc. - the tripe I reject shows up on some so-called Global Open online journal within a few months. Even if total crap - such a "publication" is evidence an academic is at least right-minded, in the anti-gun sense, to their other anti-gun peers.

Surveys that address who we are and what we think are pretty common. They are used to confirm to some "majority" that they are indeed with the majority. Liberals/progressives are smart enough to know the majority isn't always "right" but when they know they are right, it's comforting and reinforcing to know they are in the majority. The *majority* favor Universal Background Checks by some 80-90%, yet when UBCs pass a state referendum, it's usually by a bare margin. So polls do not reflect reality (or elections.) Have you ever, for even a moment, thought that as less than 1/2 of US households and residents own guns, that maybe gun ownership is wrong? Never. But the liberal/progressive mindset equates majority with "right" and needs that reassurance.

Now surveys are being used as Alinsky's Rules for Radicals #13 intends: "Pick the target, freeze it, personalize it, and polarize it." Identify gun owners as the deviant element, separate them from American mainstream culture to be ostracised not by race, creed or color, but by ideology. Segment gun owners, do the market research, and see which will vote for candidates with "common sense" gun law messages, like in VA, where Bloomberg outspent NRA 8-to-1. When VA gun owners realize their non-compliance with new laws would make them felons, they'll just be astonished that they were the targets rather than those other bad apples that shouldn't have guns.

I simply stated that since criminals are exempt from any background check or registration schemes under Haynes v. United States, 390 U.S. 85 (1968) gun control efforts do little to address criminal use of firearms.
Share:
Twitter Reddit Share Link