Is this a gun in MA?

Len-2A Training said:
I'm not saying that it needs to be registered, just that AG & DAs may consider it one for prosecution. Paging @Rob Boudrie as he tracks the case law and I recall him mentioning a case where the judge ruled that if all it took was replacing parts, it's a functional gun as far as the Marsupials are concerned. Rob can fill in detail as I don't track case law (with minor exceptions).
Click to expand...

I'll see if I can find the minor repair/replacement case.

United States v. Thompson-Center Arms Company, 504 U.S. 505 (1992) is an interesting case. The Supremes held that possession of a Thomspon Contender kit that contains a stock and a 10in bbl did not constitute possession of an SBR unless the stock, frame and barrel were assembled into an SBR configuration.

It is interesting that the feds brought this case against Thompson, rather than selecting a hapless in-duh-vidual who bought uch a kit and coercing a plea our of him/her/it.

To mostly reiterate but slightly expand:

I bought a G19 Gen4 cutaway identical to this one in Jul 2018 from Matt @Odyssey Arms in Lowell for $649. Fantastic dealer. I had just taken a Glock armorer's course and wanted to be able to inspect and show the internal safeties. I guess a slick 3D animation gives most of the benefit but it's really fun to slowly pull the trigger and see the internal parts responding, safeties disarming, etc. It's my only gun that is truly a toy.

He ran all the Federal process since the frame met legal definition of a firearm but did no state paperwork, having a slide with no firing pin hole, etc. He explained it actually started its life on the G19 assembly line but with additional cuts added and the firing pin hole never drilled (and a modified shortened firing pin to match). All parts were serialized together and came from the factory in this unfiring configuration, so it did not technically meet the definition of a modified unit that previously fired.

I thought about mounting it on the wall at home since it technically wouldn't need to be secured by MGL, but I didn't feel like tempting fate for an improper storage lawsuit and then paying $10k just to prove I was right.

The one odd Mass state restriction was the cutaway magazine. It was standard G19 capacity of 15 but with cutaways identical to the grip so you could see ammo, follower, and spring inside. You could potentially use it as a standard capacity G19 mag, so as an unwashed civilian I couldn't receive it from the dealer. He mailed that mag to someone in Tennessee for me and I was reunited with it last month when I moved.

Mtn_Guy said:
... if the frame is serialized get a letter from Glock indicating that frame is an inoperable cutaway model, and not capable of firing. No need to register in that case, IMO (because not a “firearm” by M.G.L. Definition)
Click to expand...

^ ^ ^ Ok, so this... although not incorrect to register it just to avoid the potential of hassle, so that v v v


Mtn_Guy said:
Under make/model I would definitely register it as a cutaway, if it was me...
Click to expand...

The name of the person who fires it will now called lefty unless he is lift handed. New name righty

Rob Boudrie said:
I'll see if I can find the minor repair/replacement case.
Click to expand...

This is the main case on the point: 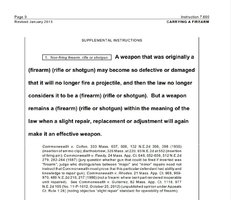 I've had to bristle each time the term "gun" has been used interchangeably with "firearm" in this thread. As noted this is not a firearm in Mass nor do i think replacement of such major components would change that. Could it be charged and wreck someone? Yes. Convicted? Doubtful.
Last edited: Nov 2, 2020

Mtn_Guy said:
^ ^ ^ Ok, so this... although not incorrect to register it just to avoid the potential of hassle, so that v v v
Click to expand...

I'm unaware of anyone being prosecuted for failure to register a gun or non-gun (it may have happened and we just didn't hear of it however), so for such a non-gun, I personally wouldn't bother registering it.


nstassel said:
This is the main case on the point:

The jury instruction:
View attachment 406752
I've had to bristle each time the term "gun" has been used interchangeably with "firearm" in this thread. As noted this is not a firearm in Mass nor do i think replacement of such major components would change that. Could it be charged and wreck someone? Yes. Convicted? Doubtful.
Click to expand...

The "ride" is oftentimes the punishment. After the DA and courts string you along for 18 months or so and you pay $10K+ in legal fees, you lose even if you "win" the case.
Share:
Twitter Reddit Share Link

Is this legal in MA?

This Gun Is Making a Comeback: Walther PPK Is One Again in Production
3 4 5

B
Why is this gun not legal for sale in MA?
2

A
This is a gorgeous gun