...the article itself isn't great, but I thought the subject was good.

hot chick with a nice rifle

This is my favorite Miami Dolphin 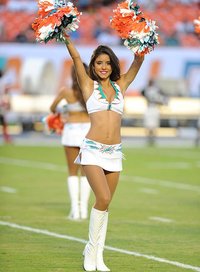 looks good with knives too!

Location
Get off my lawn

At least someone in the family is well-armed.
Click to expand...

Who could possibly have forgotten such a large and terrifying weapon in a rental car?
Click to expand...

We'll probably never know, but at least we are all now aware that trying to carjack Lauren Tannehill would be a very bad idea.
Click to expand...

I really hope they don't think an unloaded AR in the trunk magically prevents a carjackings in the same way that one pull of the trigger releases a 100-round assault killing burst explosion.
G

I read the sun-sunitel link that was on the deadspin.

That was late on a Saturday. The next day, she said they didn’t use the car. It wasn’t until two days later when her daughter raised the seats so they could go for a drive with friends when she discovered the bag, Fleissig said.

Thinking they would just call the owner, they searched for an ID, but there was none, she said. Her daughter unzipped the bag and said, “‘Oh my God, it’s a gun.’ I said, ‘I think I’m going to throw up,’” Fleissig said.

Fleissig said she and her daughter jumped out of the car to get away from the gun. “I took a picture, zipped it back up and went to the police station. They came out and took it.”
Click to expand...

Based on her reaction alone you'd have thought she found a dead body.

Hahaha gonna throw up and jumped out of car. My gawwd