If not an AR what would you get

Thats actually part of the reason I want one. I have a walnut M1A, which I love, but I really like heavy rifles, so wouldnt want a second M1A, in a chassis.
H

Someone correct me if I'm wrong here, but aren't there rifles like the SIG556 which are piston operated , and though they look similar to AR15 are not included in Healey's reinterpretation of the MA AWB? What about the Ruger SR556 ? Their internals are not interoperable with AR15's except for the magazines, because the bolt carrier and gas system are all different.


I was at Four Seasons maybe a year or so ago, and they had some SIG556 rifles for sale. They were used, and I dunno if they still are being produced, but you find them on gunbroker frequently. I had both the 556 and 556R (takes AK mags). They were excellent rifles, built like a tank, though kind of heavy. But for how I shoot (which is at the range from a bench or offhand) I like heavier rifles, it's easier to keep on target.
M

A pair of kindergarten scissors with the rounded edges and the plastic that stops you from cutting yourself. MA allows nothing else.


But in fairness, I'm an old fashioned kinda guy. Give me good ol walnut and bolt action over a lot of the plastic crap they have out now.

IF NOT AN AR, THEN AN AR

Speaking from someone who owns a scar 17, while i enjoy it, and have shot the scar 16s, i feel the need to say that what can that 3000$ scar 16s do that a cheaper alternative for an AR15 like a sig mcx, or bren do for cheaper. I do not see the need for the scar in 5.56. In 7.62 it is a whole different ballgame. It is a beauty that is almost unmatched.

If i wanted a 5.56 rifle tomorrow, i would be looking for one in the classifieds or grab a sig mcx
R

One word.
Garand.
Bad ass. Historic and it is just plain fun to shoot.

I built one of these recently...WAY too much fun 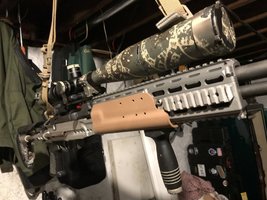 Location
under a tyrannical regime

Damn Sarge, you're on a roll lately.
N

Explosives are really losing their popularity. Only 1 in 2016?

Tavor X95 is my vote. Takes AR mags which are easy to get prebans for. Fun as hell to shoot!!
R

If they pass an awb on the poster child AR/AK stuff, or limit mags to 10, I'd go big on all future purchases next:

As far as operationally equivalent stuff, a mini 14 or mini 30 is the simple thing but dont be surprised if you do an iteration of sending them back to the factory. Ruger has outstanding service and lighting fast turnaround but flunks in quality control. For this reason Id be real hesitant to buy one used unless it was from a good friend and was known to be tip top.

These rifles are not tack drivers but are accurate enough to turn anything alive that might be a danger to you or would feed a family into swiss cheese at 100 yards. And once you have a good one they seem to be reliable with reasonable parts support, although Ruger is gonna solve your problems if needed no matter what..

Deal with mini's is though, generally you should feed them brass for reliability, and use only factory mags up to 20 rounds - be happy with 20 its a good reliable capacity.

Dennis in MA said:
What to get or what did I want?

FN-FNC
AR180
Daewoo K2
Is a Galil really an AK? I guess it is.
H&K93
A myriad of pistol-caliber 1980's action-movie guns, not including my already-acquired Uzi.
Click to expand...

K2 is where the fun Happens!
D

Never knew that. Léger = light. Which is funny because after you've rifle drilled with one for a couple of hours you feel like your arm's going to separate at the elbow.

With the milled 'waffle' face. In '91 I hit my thumb with a new-that-day hammer. It tore it open and smashed it.

mibro said:
Never knew that. Léger = light. Which is funny because after you've rifle drilled with one for a couple of hours you feel like your arm's going to separate at the elbow.
Click to expand...

Maybe compared to other Belgian auto-rifle designs? Because you're right.

Runner up would be a Remington 742. I had one and don’t know what o traded it for. Accurate rifle. Kind of awkward with a scope mounted though.
You must log in or register to reply here.
Share:
Twitter Reddit Link

Pondering an AR - what would you sell/trade
2

What would you give up to get what you wanted?
2