How The Hell Am I Gonna Remove This Paint From Sidewalk?

(Pics attached below)..
So the water department was doing some work on the pipes on our street. Before they could start, DigSafe comes and spray paints (Orange) literally every inch (well, almost every, at least it seemed) every inch of concrete around the "hole to be dug". Huge orange arrows and markings and squared-off guidelines that said basically "Dig Here" etc etc. BUT... they used regular paint, regular spray paint (instead of the temporary "marker paint" that utilities, cities etc usually use).

The city water department comes out and tears up a small piece of the street (much, much less than what the DigSafe markings had suggested they were going to, and I guess we're "thankful" that the job wasn't that huge).. The city replaced whatever they had to replace, and drove away to the pub (it was 10am by then. They were probably thirsty from the heat and grueling morning duties).
:emoji_beers::emoji_beer:
Okay, enough sarcasm, but point is the neighbors (I was working and out of town for much of these week-long "festivities") called the city about the orange paint, which was now marking up the entire street (they also did another small spot about an eighth of a mile down the street and left the same paint on the sidewalk and street).
The water department supervisors (very nice guys and gals, as all of them are in the department, despite my sarcasm LOL) told everyone on the street that it's Dig Safe, not the city, that left the paint marks because they're required to mark anything that's about to be dug, for safety reasons.
Okay, said everyone, we understand, which we do. However now the street looked like a school-yard wall in Harlem or a vacant warehouse in Detroit.
So, understanding the problem and complaints, the water department came back out and "covered" the orange paint markings with black paint (Rustoleum). The woman across the street (and another neighbor) said they used cans of black Rustoleum to cover the orange.
There are huge splotches (like the pics) of black Rustoleum, covering the orange below it, everywhere. I had contractors at our house doing pre-painting work the other day, including pressure washer and they (nice guys, they're friends, who "feel our pain) tried for a while to power wash/blast the markings of paint away, with (as you can see) limited success... I went to Lowes and Home Depot seeking a spray paint that might" match" the concrete (and therefore blend away the "graffiti" stains), but none that I tried were really a "match". Nice, quiet, beautiful street in a nice neighborhood, now looks like a set for the next Fitty Cent or Wiz Khalifa rap video...
Anyone have ANY idea as to how to get it up? (the paint LOL. A little sarcasm often calms my rage)... I spoke with the city, even the Mayor's office, and the thought or suggestions of ripping up the street or hot topping it, just to repair paint stains, basically went over like a fart in church. So we are definitely "on our own", so I turn to the experts I always turn to..The NES Brain Trust!

Any thoughts/suggestions? (the street looks like this also, in front of three houses, and a sidewalk and the street just down the road does as well) ... 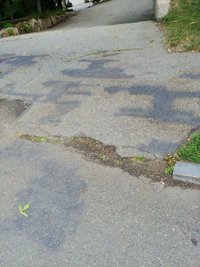 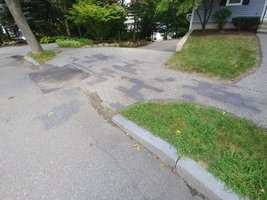 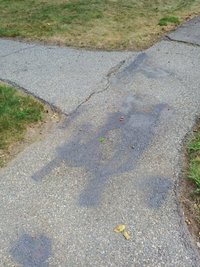 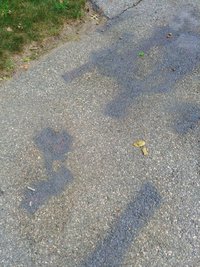 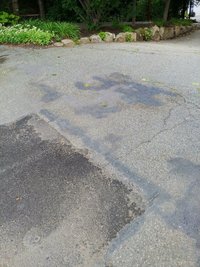 Easy solution, if its any town in MA just spray paint "we support Trump" everywhere and I guarantee the city will find a way to replace that sidewalk....
A

Unless your going to torch it off ( propane weed-wand or the small blue torch) and wire brush it, it'll wear off eventually. Most likely by the spring.
Digsafe contracts out, so what municipalities can't mark, companies like On-Target (off-target in most cases) will use high-vis traffic stuff.

Spray some dick pics and sexual slurs about Dig Safe and the Mayor. It’ll be cleaned up by Monday. 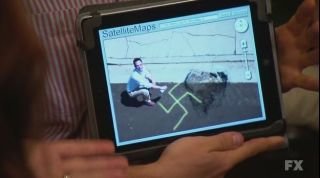 Neighbors chip in and hire a graffiti removal company that uses baking soda for removal. Can't cost that much and the residue gets washed away when it rains
O

If it's the town's sidewalk, do nothing. If you do funny stuff on it, they will come after you. Jack.

highlander said:
Neighbors chip in and hire a graffiti removal company that uses baking soda for removal. Can't cost that much and the residue gets washed away when it rains
Click to expand...

I was going to say sand blasting. I assume this is the same thing but with baking soda? Perfect.
R

appraiser said:
driveway sealer over it. It must have been a crappy pressure washer as normally a pressure washer will remove skin and anything else in its way
Click to expand...

this....make the driveway and walkway look nice. it's the right time of the year for it...and it will look much better than it did before the paint got there.

this will probably dissolve the sidewalk

Get a soda blaster at Harbor freight.

Fixxah said:
Get a soda blaster at Harbor freight.
Click to expand...

And a big air compressor. Abrasive blasting takes a lot of air. I downsized to a 1.5hp compressor and I have to be patient even doing small parts.

Power Washer with the highest pressure nozzle?
A

get some colored chalk, draw an ancient Indian symbol of divinity and spirituality on the sidewalk, wait for the SJW's and news crews to show up...the town will be there shortly thereafter to rip it up and repave it

You could do like this guy... Manchester man draws penises around potholes so the city will fix them

Or just hire a sidewalk artist to come in and do a nice mural.

The solution is very simple and fun ...

Step 2: organize a NES shoot. The firing line needs to be 10 yards from the paint (paint should be between the car and firing line).

Step 3: let all the rounds hitting the pavement remove the paint.

Step 4: enjoy the memories and a job well done.

I don't know for sure what was used there, but the orange ground marking paint is usually semi permanent, meaning a day of heavy rain will wash it away. If it hadn't been covered with black, it would rake care of itself.

This whole situation hilarious... too many concerned citizens in these parts.

i'm a bad homeowner! i have 'em outside in front of my house and i could care less. if it bothers my neighbors they can remedy the situation. 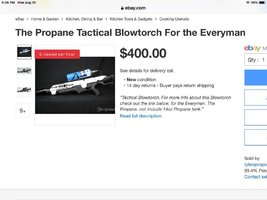 My solution for removing anything

The paint they use is not permanent, it weathers away in a few weeks. Any effort you put into removing it was a waste of time.

Just flip the asphalt over to the clean side.

When all you have to b!tch about is marks on the road: put your feet up, light a cigar and have another beer.

If not willing to seal the driveway, just spray paint in large letters "TRUMP 2020".
Someone from the town will be down shortly to remove it...

dwarven1 said:
You could do like this guy... Manchester man draws penises around potholes so the city will fix them
Or just hire a sidewalk artist to come in and do a nice mural.
Click to expand...

Mr.E said:
Easy solution, if its any town in MA just spray paint "we support Trump" everywhere and I guarantee the city will find a way to replace that sidewalk....
Click to expand...

GlockJock said:
LMAO LMAO... this is awesome! Why didn't I think of these options before starting the thread?? (LOL)
Click to expand...

Did you seriously not know that the marker paint used was only temporary? Did you even ask about it?

this will probably dissolve the sidewalk
Click to expand...

It works even better when mixed with orange juice and tastes just like a "screwdriver"!

Just pretend its not there eventually it'll go away. Ironically the broad that sprayed all that rustoleum on the pavement did 100 x more damage than the digsafe guys did... that marking paint for pavement wears away on its own eventually... by covering it with that shit, she just ensured that it would stay f***ed up that much longer....

If you actually care, appraisers solution is the best idea.... just get a barrel of sealer and mop over it, at least it will all look the same when you're done.

My company moving to South Station - Where the hell am I gonna park?
4 5 6

So how the hell do I fix this? Wood related
2

I am just gonna leave this right here!!

Leigha Genduso...how the hell does this happen?
2

How do I remove this shower head
2