Hi-Point having a social media sense of humor, help name their new gun

Behind Enemy Lines said:
Maybe HiPoint can buy HK, that would be fun to watch.
Click to expand...

Oh God can you imagine the HK snobs freaking out???

dragonballzz said:
Yeet Cannon may get Gen Z into shooting

But they are kicking HK's butt, so there is that. LOL


MANSFIELD, OH (WCMH) — A Mansfield-based gun manufacturer is crowdsourcing the name of its new nine-millimeter pistol, and the internet has responded.

Beginning earlier this month, Hi-Point Firearms urged social media followers to submit names for its new pistol, and the Yeet Cannon (YC-9) came out on top with 556 entries, according to the manufacturer’s Instagram page

When Ohio-based Hi-Point asked the internet to suggest a name for their new 9mm handgun, the Yeet Cannon fired and the Germans got in on the act. Hi-Point’s “Name the Nine” contest promised to give their fans a stake at naming their promised new handgun design. Initial name suggestions after a week of polling reportedly garnered 7,880 entries, with the most prolific, 556, being for Yeet Cannon or YC-9.

Yeet, a word that has crept into acceptance in the past few years, is generally employed as a multi-use exclamation. However, four days after announcing Yeet Cannon was topping polls, Hi-Point on Tuesday announced a final list of 10 proposed alpha-numeric names, none of which included the past crowd favorite. This sparked a backlash on the company’s social media page, with some 1,600 largely negative comments, many questioning the absence of Yeet. 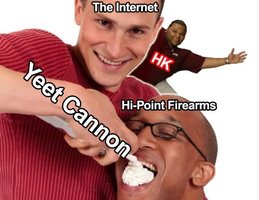 Would it be fair to say they caught a yeet infection?

Problem Solver would have been awesome. 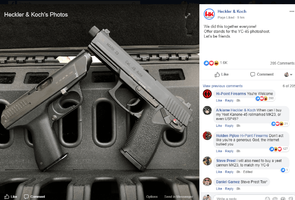 My guess is that it came from the Oakland, CA area slang expression / call, "YEE!". Being from Boston, I first heard "yee" around 15 years ago listening to Bay Area music. I guess it finally made it's way into white america. Most of Gen Z wasn't even alive then.


ReluctantDecoy said:
It's just an expression of excitement. An exclamation that one is at the peak of (typically) positive emotion to which there is little use for verbal expression other than to yell out a nonsensical word that encapsulates this emotion and expresses to everyone else what you are feeling. You can either yell out "yeet!" or you can be said to have "yeeted" in an act of impulsive, uncontrolled action conveying excitement.

While I don't use this word myself (about 20+ years too old for that), I can certainly understand the correlation between this concept and shooting guns.
Click to expand...

Behind Enemy Lines said:
I'm apparently old, what is a Yeet?
Click to expand...

sigfanboy13 said:
It's a wierd slang to essentially launch something at or into something. Like yeeting a grenade into a 3rd story window or making a half court shot in basketball. For maximum effect it must be yelled as it's launched and or thrown.
Click to expand...

dragonballzz said:
My guess is that it came from the Oakland, CA area slang expression / call, "YEE!". Being from Boston, I first heard "yee" around 15 years ago listening to Bay Area music. I guess it finally made it's way into white america. Most of Gen Z wasn't even alive then.

While I lol at the yeet FA setting, I shutter at the thought of how corny and played out SHITshow 2020 is going to be. 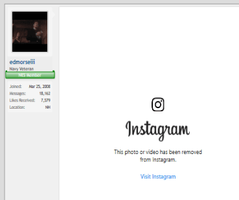 Nah, it was a gag post from Cold Steel Knives, they announced the YEET CLEEVER 9, it was actually quite funny.

Kind of related, made me chuckle anyways.

Cheap Ass Gun. It speaks to the intended market.
J

Mountain said:
It's a little plump looking, which makes the thread protector look like a nipple.

I have nipples greg... can you milk me

I had a female dog, spayed as a puppy. We acquired a kitten that was separated from mommy a little too soon and the pair developed into besties. Or would that beasties?

Anyway the kitten kept nursing the dog and after quite a while, her milk came in.

My name’s not greg, and I’m assuming that was supposed to be a PM to him?

Mountain said:
My name’s not greg, and I’m assuming that was supposed to be a PM to him?
Click to expand...

I don't even like how much yeet is getting spammed, but I am dying at the way that Hi-point dared to wade into the sea of retards that is the internet and is surprised when the first step it took went 180° in the opposite direction they intended. All of which I say they instigated by offering things like the dolla' dolla' bill y'all hi-point.
You must log in or register to reply here.
Share:
Twitter Reddit Link
Top Bottom